After a damp and windless Wednesday morning, the Race Officers at the Royal Yacht Squadron (RYS) took the decision to abandon racing for the three Big Class yachts vying for the Westward Cup this week in Cowes, Isle of Wight. However, the gloomy weather failed to dampen the spirits of owners and guests however and, indeed, Mariette and Mariquita decided to get in some some practice sailing as the wind picked up and the sky started to turn a pale shade of blue. 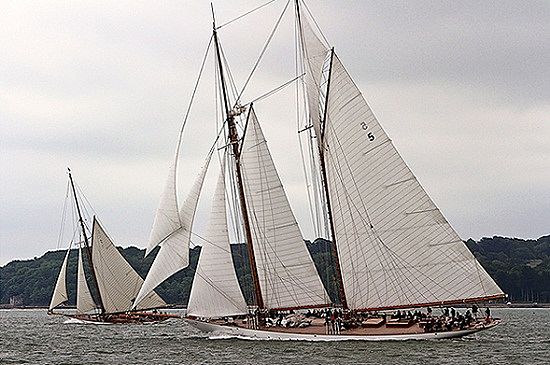 Today, with all eyes on the weather forecast and watching out for today’s expected low, the Race Officers at the Royal Yacht Squadron decided not to send the yachts around the Island as originally planned and instead ensured they got in two terrific races in the Eastern Solent, racing for the YCM (Yacht Club de Monaco) Trophy.

The first race took the fleet of three classic Big Class yachts, Eleonora, 49.5m LOA (160ft), Mariette, 42.06m (138ft) and Mariquita, 38.1m (125ft) from the RYS line to the east to Warner, past the Forts at Seaview, back up the central Solent to South Bramble, to Gurnard and finishing on the RYS line to the delight of the mass of spectators at Princes Green and on Cowes Parade. The 28nm race was won by Mariette, followed by Mariquita with Eleonora in third place. Conditions were beginning to freshen and it was a very successful race.

This afternoon’s racing had the yachts heading east once again to the mark at Mother Bank, thence to East Bramble followed by a long run to West Lepe, and back up the Western Solent to the finish at the RYS. Conditions were deteriorating as the wind increased from the south-east, strengthening to 20-25 knots, not damaging but perhaps a little hard on some of the older yachts and indeed Mariquita decided to call it a day and returned home to base before even starting this afternoon’s race.

Richard Salaman, Safety Officer, commented, “In terms of the withdrawal of Mariquita, the decision taken by the Captain, Jim Thom, not to start the second race, was probably wise in the deteriorating conditions.”

For the remaining two yachts, they had a hard time of it until they got to Mother Bank where they turned north-west to East Bramble which gave them an excellent wind and they obtained some very good speeds all the way to West Lepe and then across the finishing line by which time the sea state was becoming very lumpy.

Looking ahead to tomorrow, there is a deepening depression tracking north from Biscay with a pressure prediction of 982Mbs which on its present rack could produce winds in excess of Force 5-7. There is some uncertainty as to the exact track it is going to take and a decision will be taken at 0830 on Friday as to whether racing is going to be possible on Friday.