Home > News > What will be the future of USS Williamsburg?

Built in 1930 by Bath Iron Works for the American newspaper magnate, Hugh J. Chisholm, the 74.3 metre USS Williamsburg is a vessel with immense historical significance, and at the time of her delivery, was one of the world’s largest privately owned yachts. 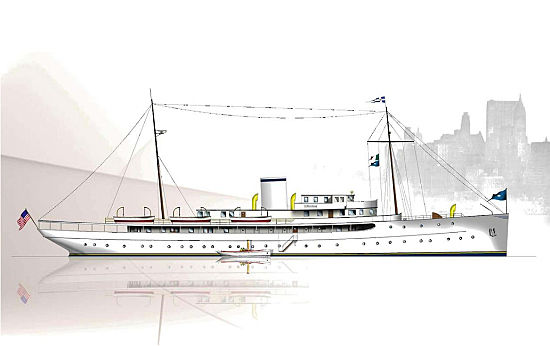 In 1941 she was purchased by the US military for use as a Patrol Gunboat. After four years serving in WWII she was decommissioned in 1945 and converted for use as the presidential yacht for President Truman. During this time, the White House was undergoing extensive renovation and the Williamsburg was used almost as the nautical home of the president for a period. Her array of visitors included Winston Churchill among other visiting heads of state and dignitaries, resulting in the fond nickname of the ‘sea going White House.’

Once president Eisenhower took office, he declared the White House no longer had any use for the yacht. So, in 1969, the impressive superyacht was converted into a floating restaurant in the city of New Jersey. She was eventually abandoned in the 90s after the District of Columbia reportedly made a complaint of the vessel being an eyesore in the community. As a result, she was shipped overseas, sadly out of sight and unfortunately out of mind.

USS Williamsburg is now laying in an Italian shipyard in La Spenzia, awaiting a new owner willing to refit the yacht. She is currently listed for sale by Camper & Nicholsons International, offering a potential buyer an exciting opportunity to restore this historic vessel to her former glory.

Other historic refit projects over the past couple of years include the ongoing project of the 1961 57.6 metre superyacht Lady K II (ex. Radiant I, Princess Tanya), and the 65 metre classic 1938 motor yacht Shemara, which was successfully launched earlier this year. The end result of a restored USS Williamsburg would undoubtedly produce a spectacular superyacht, the only question that remains is whether or not an investor will step forward to maintain this 74.3 metres of history.