When launched next year, Athos will be the world’s largest privately owned, modern two-mast schooner. She has a LOA of 62 metres, a beam of 11 metres and, uniquely for her size, is being built to MCA and Veritas. Her deep-V hull is made of 5383 aluminium, a high modulus metal that increases strength and is less prone to corrosion. Athos is the largest sailing yacht yet built in this type of super-strong alloy and the first project in HJB’s brand-new assembly and finishing hall. 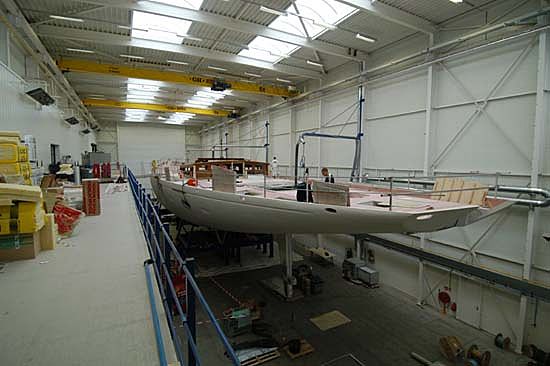 Designed by Hoek Naval Architects, Athos has a shallow draught keel and integrated centreboard. She will have a 1980 m² upwind sail area on carbon spars, while a mast height of 62 metres will allow passage under the Bridge of the Americas. An almost entirely pushbutton-operated rig will include furling booms on boomvangs, carbon spars and captive winches on sheets and halyards. Twin main engines will drive controllable pitch propellers, while two diesel and two shaft generators provide a parallel power supply. First class manoeuvrability will be assured thanks to 150 kw retractable bow-and sternthrusters. 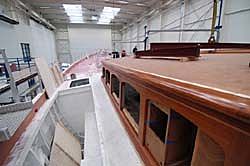 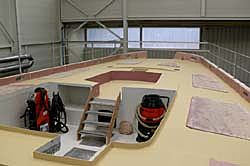 Forward of the owner’s suite will be four good-sized guest suites. The main deckhouse will have a large dining area to starboard, with a lounge and stewardess area to port. The lower saloon is arranged as a large library to starboard, with a galley opposite that can be either open or closed. Cooking will be an integral part of the interior set-up as the owners enjoy creating haute cuisine. Forward are a large crew mess, crew galley, five crew cabins, and a large separate captain-chief engineer office with an integrated control room.