The exterior styling of 80-metre yacht Artefact is striking enough, but behind those mismatched windows, her technical design is equally groundbreaking. During a recent visit to the Nobiskrug shipyard in Rendsburg, Germany, SuperYacht Times was granted exclusive access to the project and shares with you her construction progress in this in-build report. 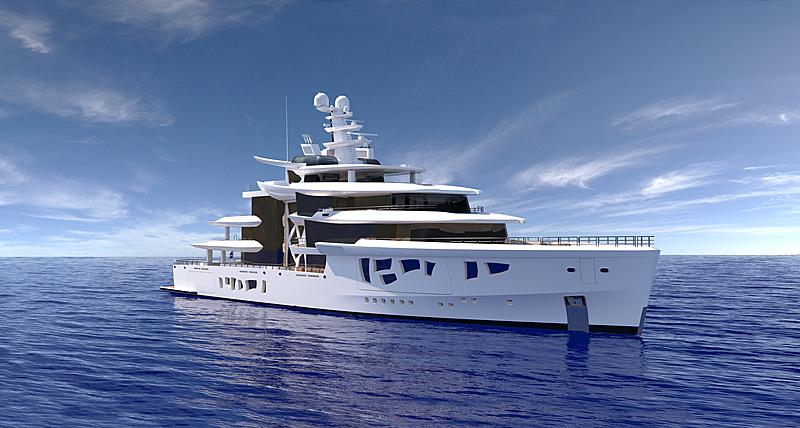 It’s not unusual for yachts to grow during the design process, but Artefact grew more than most. From the original 55-metre concept devised by Gregory C. Marshall Naval Architects, the project ended up 25-metres longer, reaching 2,990 gross tons. When completed this summer, she will be the highest volume 80-metre yacht on the water.

“My first advice to owners is to build bigger than they think they need and to design the yacht with a view to owning it for 15 to 20 years,” says Captain Aaron T. Clark, owner’s representative and captain of Artefact. “That way they have the time and space to grow into it.”

This advice was not wasted on the owner, who wanted his first superyacht to stand out from the crowd and remain relevant well into the future. Multihulls and even SWATHs were considered during the search for a suitable design, but they kept coming back to a displacement monohull as the most versatile and cost-effective solution. After reviewing other concepts, Marshall’s design with its radical window shapes appealed to the owner’s desire for something different. 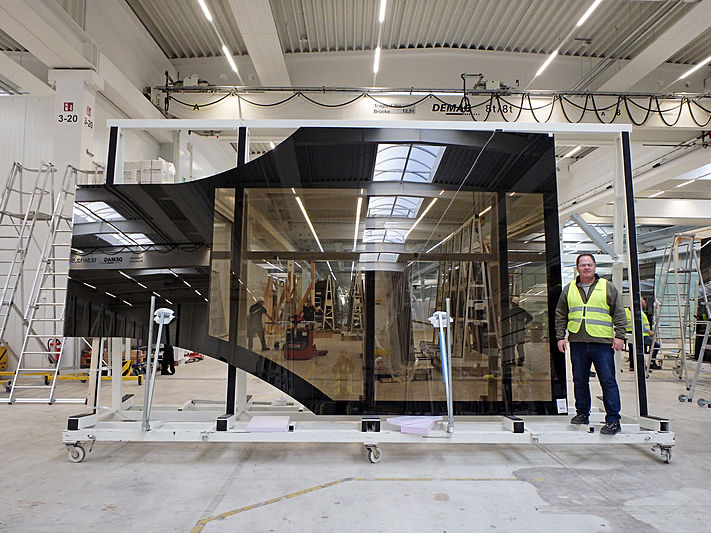 “The truth is we didn’t have much hope that it would ever get built,” recalls the Canadian designer. “But the owner and Aaron were determined to keep the purity of the original design intact. That was refreshing for us because it’s quite rare to see such dedication.”

In fact, pinning down the initial concept was just the start of a long process of additional research, fine-tuning and due diligence that lasted nearly two-and-half years before Nobiskrug started cutting metal in November 2016.

“To make sure the initial investment would pay off over time, it was important that the yacht could be operated efficiently and easily maintained,” says Aaron. “The owner has an engineering background and understood the technical issues. We had some creative discussions about what made practical and financial sense, and what didn’t. All the technology aboard the yacht is proven science – we just applied it in different ways.” 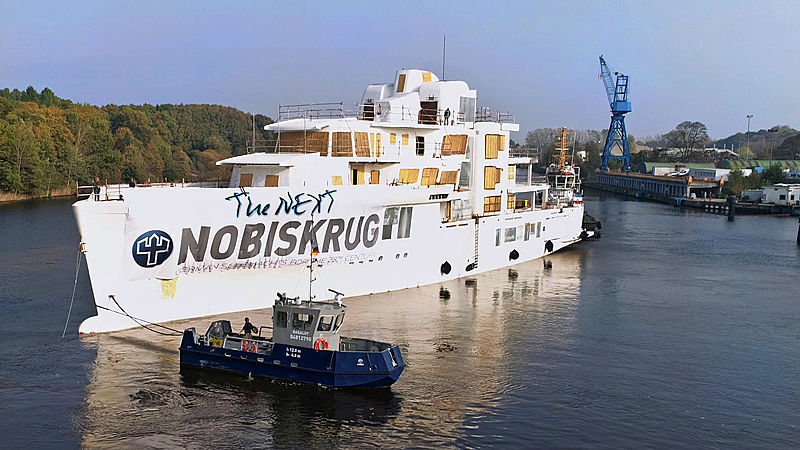 Rather than starting with a given hull length and filling it up, Aaron approached the project from the opposite direction by first deciding what had to go into the yacht and then determining how big it should be. To this end, he rented a warehouse for six months and built a full-size, plywood mock-up of the entire owner’s deck and other key areas such as the beach club, main salon, galley, and wheelhouse.

“We thought about using Virtual Reality, which is cool but it's not the same as being able to walk through a physical space,” says the owner’s representative. “On the first day, the owner came in and asked for some modifications. The carpenters got to work to make the alterations and by the third day, it was ready for another walkthrough. Nothing in the layout has changed since then, because we know it all fits. The whole process was quicker and much less expensive than VR. But more importantly, it avoided delays and change orders once construction got underway.”

Some form of hybrid propulsion was envisaged from the start and Aaron attended the Electric and Hybrid Marine World Expo in 2015 in Amsterdam to research the latest developments. He evaluated various solutions from micro-turbines to LPG propulsion before specifying a hybrid package comprising of two hotel CAT generators (610 kVA), two main CAT generators (2425 kVA) and an array of Lithium-ion batteries (610 kWh) coupled with twin ABB compact azimuthing pods for full Dynamic Positioning capacity. In addition, 23 square metres of solar panels on the sundeck hardtop provide around 6kW of auxiliary power. 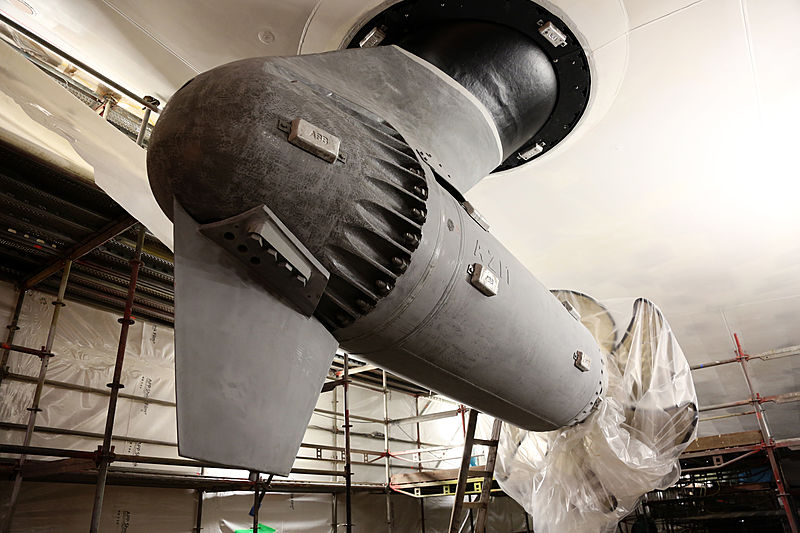 On the suggestion of the technically minded owner, Artefact is the first hybrid superyacht to be equipped with ABB’s Onboard DC Grid system that provides additional efficiencies by allowing the engines to work at variable speeds and run on stored electrical energy.

“The set up allows us to run the yacht in a state of optimal efficiency and minimal wear and tear on the generators,” explains Aaron. “Instead of starting another diesel engine when the power demand increases, we can just pull it from the battery bank or, conversely, use any excess energy to recharge the batteries. Basically, we’re always conserving or redirecting energy, that’s the real advantage.”

In operational terms, the DC-bus hybrid configuration offers multiple propulsion modes. The yacht can run off batteries alone for short distances or for loitering and maneuvering; at 10 knots on just one house generator; at 12 knots on one main generator; at a top speed of 17.5 knots on all four generators; or any combination of the above. Additionally, in eco mode power can be pulled from the propulsion load during spikes in demand with a fractional loss in speed for a range of 6,000 nautical miles or more. 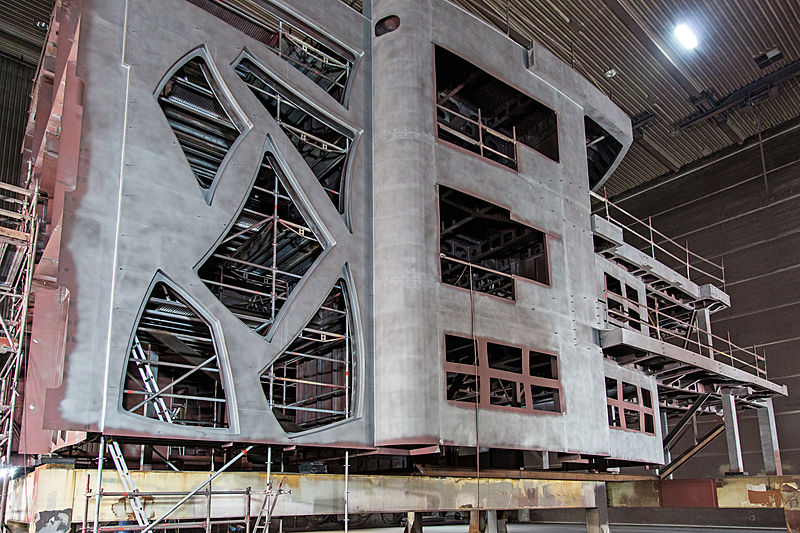 There are other advantages. The system helps to ensure that Artefact complies with IMO Tier III regulations governing NOx emissions (due to being fully introduced in 2021), and the yacht is expected to be 25-30% more fuel-efficient than a comparable vessel with conventional diesel propulsion. Together with an integrated power and energy management system (PEMS) to automatically control load sharing between energy sources, the system also eliminates the risk of voltage/frequency disturbances and blackouts, which means appliances like fridge-freezers and other electrical equipment last longer.

Once the required interior volume had been determined and while the propulsion package was being evaluated, a preliminary hull form was developed and tank tested prior to deciding which shipyard should build it. By the time the project was ready to put out for tender, Aaron had an 80-page specification document to present to his short list of shipyards. Some of those yards balked at the engineering challenges, while others wanted to impose their own technical platforms on the design.

“We were looking for a builder that was willing to maintain the pedigree of the project, someone who could build a truly bespoke yacht and not just a cut-and-paste job,” says Aaron. 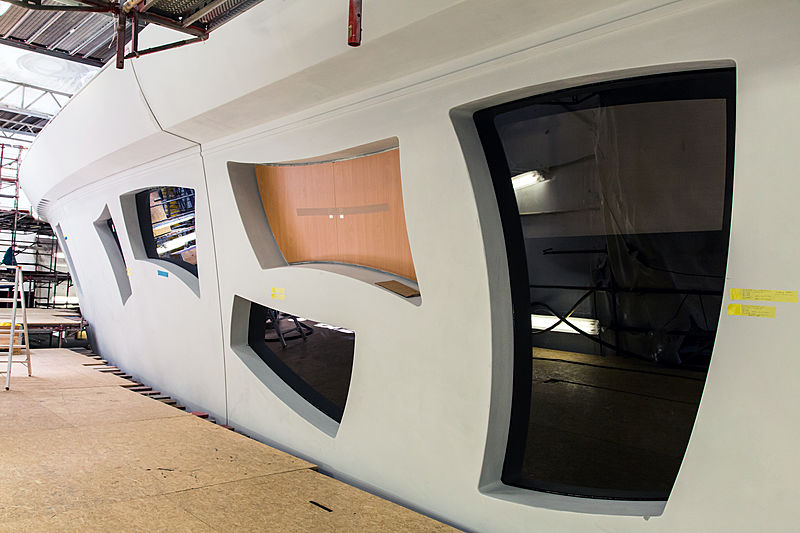 Nobiskrug, which has earned a reputation for tackling out-of-the-ordinary projects from Tatoosh to Sailing Yacht A, emerged as the strongest contender.  “Thanks to our facilities, engineering skills and experience of building specialist naval vessels, we feel we’re very well qualified to take on these kinds of projects,” says Holger Khan, managing director of Nobiskrug. “We’re not afraid of pushing the envelope, but perhaps the biggest challenge with Artefact was that she’s a very high volume yacht with a fibreglass superstructure and tremendous amount of heavy glass.”

The 750 square metres of glass windows weighing in at 58 tonnes are Artefact’s defining feature. The largest single glazed surface covers 14.6 square metres, the longest piece of individual glass is 10.6-metres and the thickest panes in the hull are 94mm to avoid the need for storm shutters. 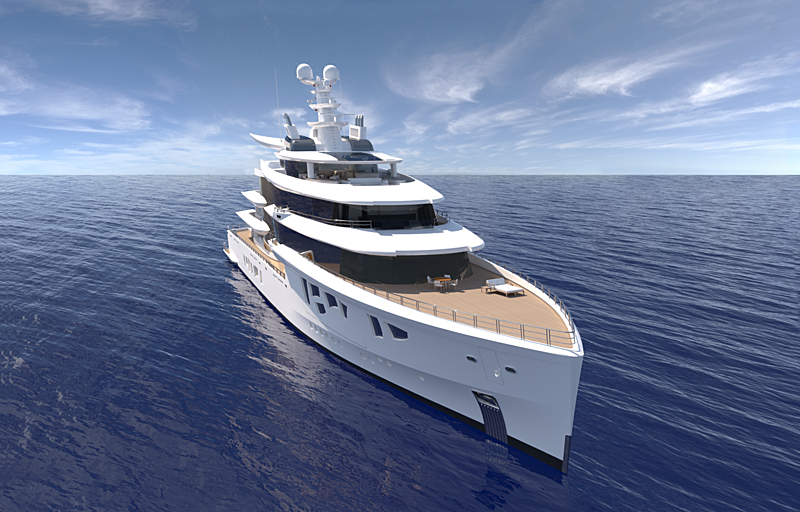 Working to Aaron’s technical specifications, Nobiskrug took over the engineering and naval architecture and ran another series of tank tests (attended by the owner) to further optimise the hull form and stability. Wind tunnel tests were also carried out and the exhaust stacks were raised by 600mm to prevent smoke or fumes back-filling onto the top deck. In-house analysis of noise and vibration was double-checked by a specialist subcontractor and in the living areas, noise levels are around the 40-decibel mark, which is equivalent to a hushed library.

Except for a central steel column housing the main staircase, elevator, exhaust routes and much of the cabling and piping, the rest of the superstructure is GRP. Lightweight and corrosion-resistant fibreglass compensated for the heavy glass and allowed for the complex shapes of the mouldings. Constructed off-site, some of the GRP sections were so large they had to be delivered to the shipyard by barge.

Once on board, Artefact gives the impression of being much bigger than her overall length suggests. Ceiling heights are never less than 2.3 metres and in places exceed 3 metres. A full-height under lower deck runs the length of the vessel and houses a laundry, crew lounge, and gym, cold and dry stores. There are four tender bays and the main garage has a 12.5-metre shell door, which was engineered to within tolerances of just 3mm to follow the contours of the hull and maximise the available space.

The word ‘artefact’ is derived from Latin to describe something of historical interest made by human hands, and it’s hard to think of a more apt name for the superyacht due to make her debut at the 2019 Monaco Yacht Show. Details of the interior design by Reymond Langton have not yet been released, but if the time and effort put into her technical design is anything to go by, she will surely steal the show.