The commercial success of Cantiere delle Marche (CdM) is based entirely on the niche market for pocket explorer yachts under 500GT. Earlier this year, we travelled to the shipyard in Ancona on Italy’s Adriatic coast to take a closer look at 39.37-metre yacht Aurelia, the first hull in its new Flexplorer series, before she launched this summer. 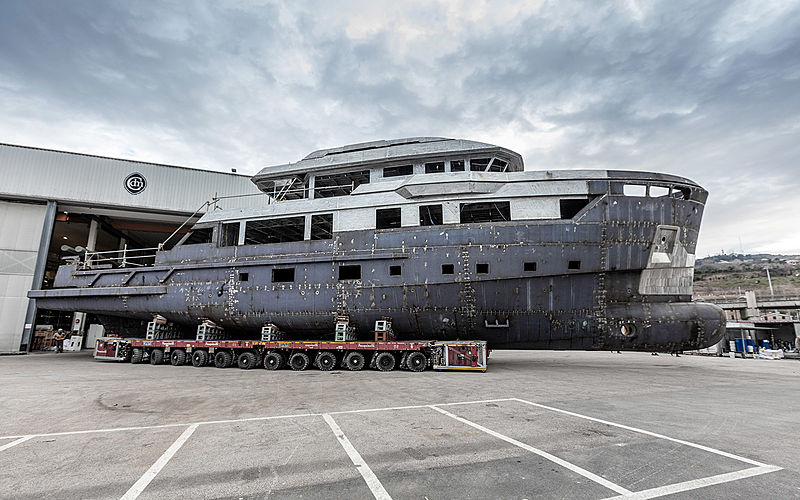 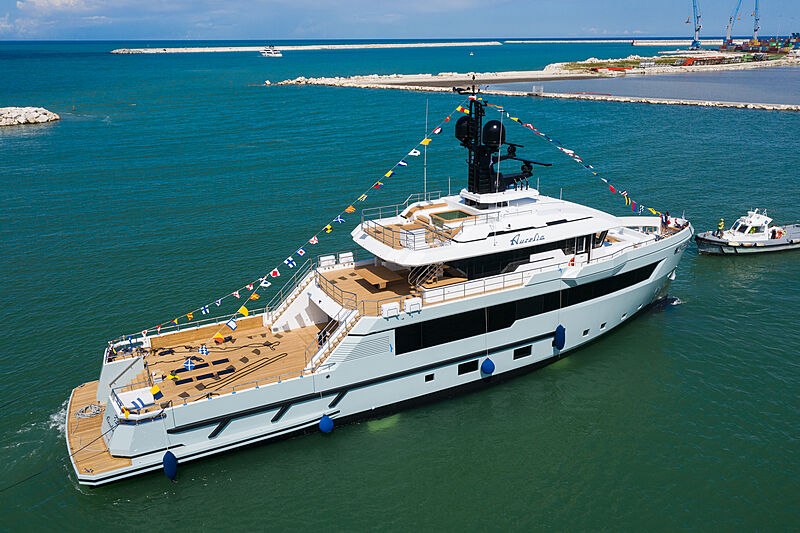 Photo: Cantiere delle MarcheIt is somehow appropriate that our first in-build story in a post-lockdown world came from an Italian shipyard that was founded in the wake of a very different global disaster: Cantiere delle Marche celebrates its 10th anniversary this year after being set up at the height of the financial crisis.

It is equally appropriate that Sergio Cutolo of Hydro Tec, the naval architect behind the design of both the Flexplorer series and CdM’s very first Darwin Class of rugged explorers, celebrates 25 years in yacht design in 2020.

In fact, the owner of Aurelia decided to upgrade from his previous 100+ foot Darwin Galego (pictured below, now known as Hvalross), which he describes as “probably the best vessel someone can have in the 100-foot range,” principally because he wanted to be able to carry a bigger tender without forfeiting interior space. 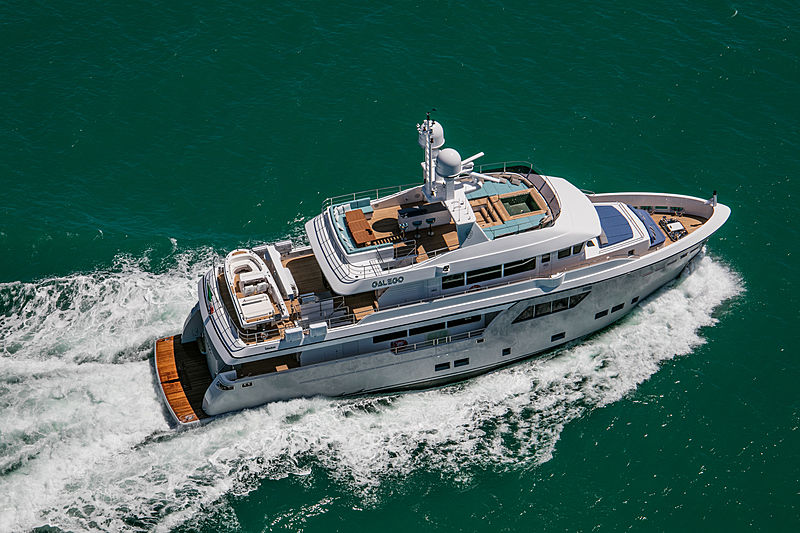 Photo: Cantiere delle MarcheAnd this is where one of the Flexplorer’s standout features comes into play: the 3-tonne, carbon-fibre A-Frame crane for launching her 28-foot tender and various toys stored on the main deck.

“A big tender necessarily means a heavy-duty crane and a lot of heeling when operating over the side of the yacht, and once the tender is in the water you still have a big piece of machinery taking up valuable space on the open aft deck,” says Ennio Cecchini, CEO of CdM.

“So the starting point for the Flexplorer concept was an A-frame crane that can launch and retrieve the tender over the stern with no heeling and, when not in use, fold away out of sight into the deck.” 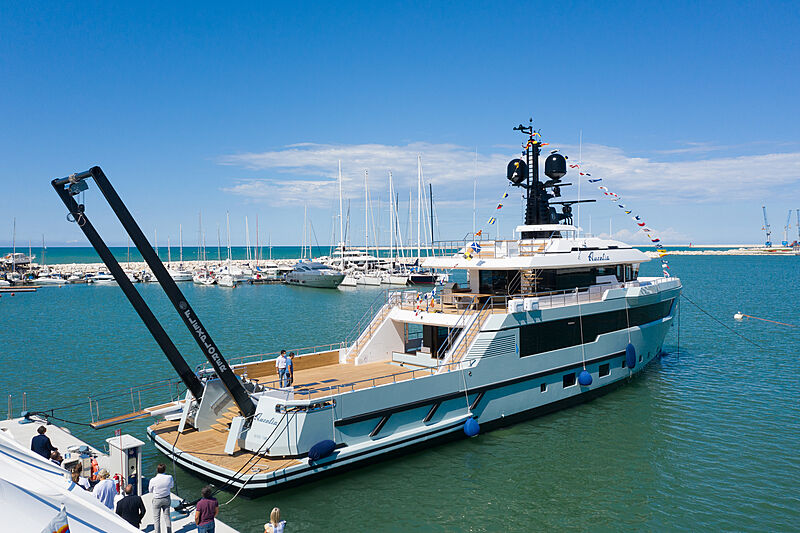 Photo: Cantiere delle MarcheThe 9-metre crane, which was custom-built in carbon fibre by Advanced Mechanical Solutions (AMS) in Ancona, was waiting to be installed at the time of our visit, but the teak-covered recesses in the deck that house the frame and hydraulic pistons were already in place: “It took around a year to fine-tune the overall design and especially the automatic system of flaps, because they had to fit perfectly flush with the deck and feel completely solid underfoot,” Cecchini points out.

Another challenge was that the crane could not impinge on the ceiling height on the deck below where the owner, who is two metres tall, wanted a full gym and dive centre. Six skylights ensure the space is filled with natural light and although the crane housing is visible along the sides of the gym, a generous ceiling height of at least 2.15 metres has been maintained throughout the interior of the yacht. 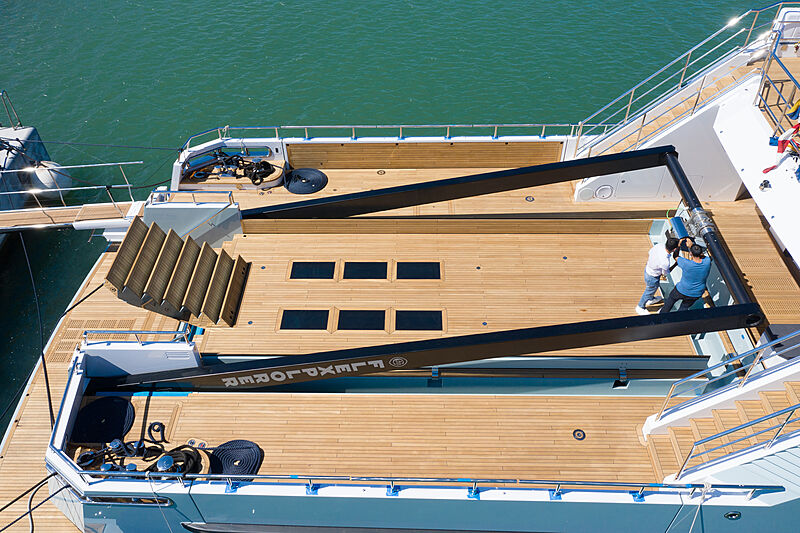 Photo: Cantiere delle MarcheThe owner plans to travel the world with his family visiting some of the best surfing sites along the way and requested a storage unit with easy access to hold several surfboards. CdM designed a watertight, stainless steel unit with its own drainage and fresh water supply for washing down the boards, which has been sunk into the aft deck under a flush hatch. 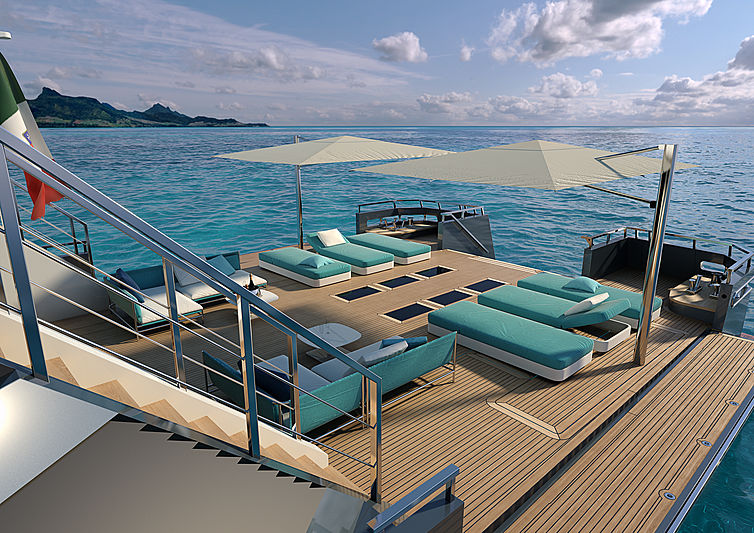 Photo: CdMAfter the tender is offloaded, the whole aft deck becomes a vast beach club that covers more than 100 square metres when the two collapsible bulwarks are deployed. The yard is also looking at ways to rig a cinema screen between the two supporting arms of the crane. 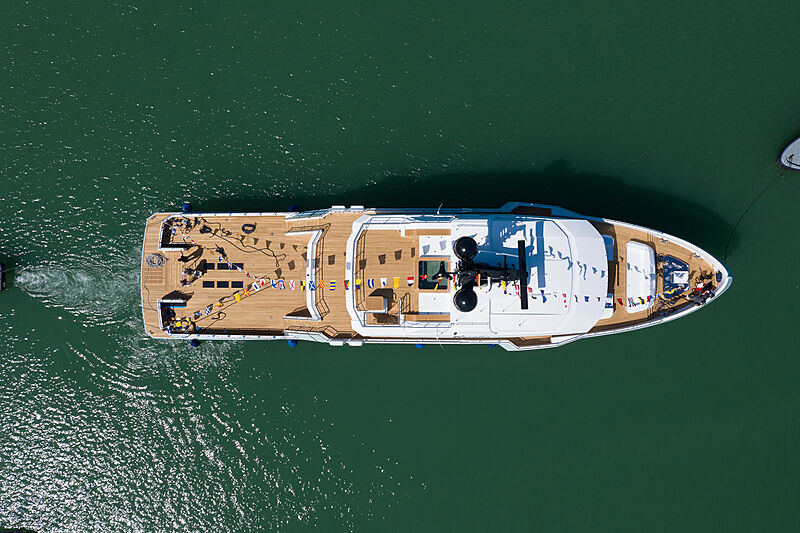 Photo: Cantiere delle MarcheAs its name suggests, flexibility is central to the Flexplorer concept. CdM builds its series explorer yachts based on common technical platforms, but customisation has been key to the brand’s market appeal and the Flexplorer series offers alternative layout solutions without the need for radical re-engineering.

Clients can choose, for example, to have an infinity pool in the transom or in the middle of the open deck, which has the added advantage that when covered it can double as a handy hold for storing the deck furniture and water toys while underway. 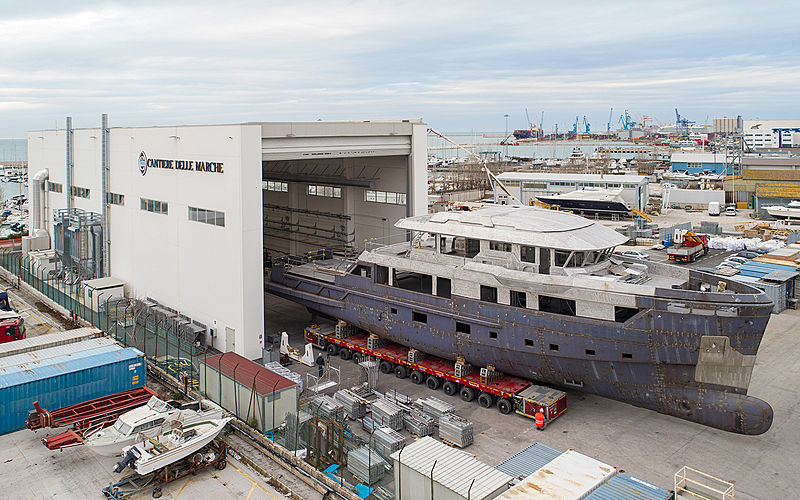 Photo: Cantiere delle Marche“Another client wants to keep two containers on deck,” says Vasco Buonpensiere, CdM Sales & Marketing Director. “One would have an openable side and serve as an artist’s studio with a sea view for his wife, while the other would be a classroom for the kids’ onboard schooling. The majority of our clients want a real explorer to voyage off the beaten track, but they may also want to anchor in front of La Voile Rouge in St Tropez. The Flexplorer is a yacht that fits every occasion.” 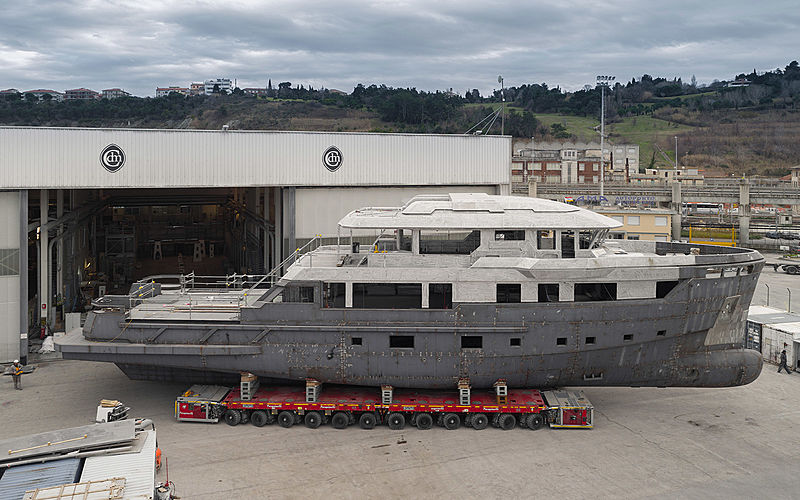 Photo: Cantiere delle MarcheThere is no doubt that Aurelia will be capable of ‘real’ exploring. In the CdM conference room is a sample of the hull plating used for all its yachts. The heavy steel plate is 12mm thick – 4mm more than the standard required by Class. The extra-thick steel adds robustness, of course, but also weight low down in the vessel where it is most needed to enhance stability and comfort. 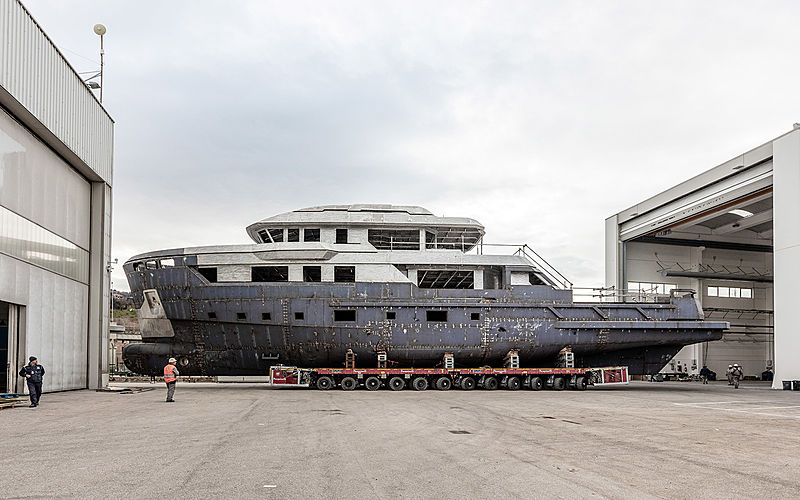 Photo: Cantiere delle MarcheAnother prerequisite for an explorer yacht is a long range and Aurelia will be able to cruise 5,000 nautical miles powered by CAT C32 engines with a heavy-duty rating and a fuel capacity of 60,000 litres.

Although similar in size to 42-metre Crowbridge, the one-off explorer designed by Tommaso Spadolini launched in June, and the MG 115 by Francesco Paszkowski also due to launch this year, the Flexplorer has a specific hull design that can be lengthened up to around 45 metres. After initial CFD analysis, Hydro Tec modified the bulbous bow to better suit the near vertical bow and tank-tested the hull at the MARIN institute in the Netherlands. 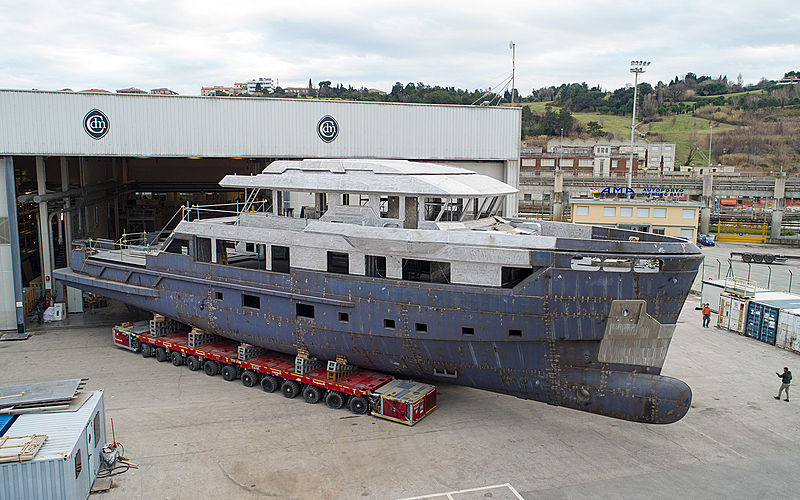 Photo: Cantiere delle MarcheAurelia is also the first CdM yacht to be fitted with two pairs of zero-speed stabilisers. “The four CMC stabilisers were introduced for reasons of redundancy, as well as more flexible operation and efficient performance,” says Sergio Cutolo.

“Under way, the aft pair are usually stationary so there is less interference with the independent rudders, while at anchor all four are working to provide better roll damping. On future builds, we’re looking to integrate the stabiliser and steering systems so the two can talk to each other.”

The layout of the guest areas is fairly conventional with four ensuite guest cabins on the lower deck and the owner’s stateroom on the forward main deck. But unusually the main salon is full-beam to starboard with a companionway on the portside leading to the stairs and seating area in front of the wheelhouse, which also provides discreet access fore and aft for the crew from the galley. 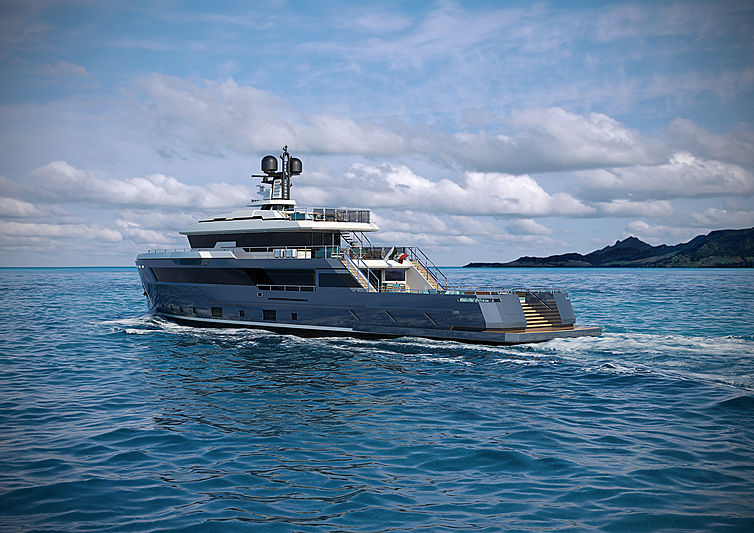 The interior design of Aurelia promises to be unlike anything seen before on a superyacht (although the eclectic interior of the Baltic 175 Pink Gin VI comes close in terms of sheer individuality). The owner, a connoisseur of antique furniture, wanted to fill the yacht with objects that have a “beautiful patina” and materials such as concrete, iron, slate and glass for a vintage feel with a post-industrial twist.

A centrepiece will be an all-glass, temperature-controlled wine rack that is integrated into the staircase and extends from the main lobby to the upper deck. “I am quite peculiar when it comes to interior design,” says the owner. “I actually do not like houses and boats furnished with what is normally shown in design magazines around the world; it’s like fashion – market-driven, and it doesn’t say much about the owner.

“The cooperation with Francesco Paszkowski and Margherita Casprini has been fundamental in reaching a stunning result, which I think is going to be a first in yacht interior design.” 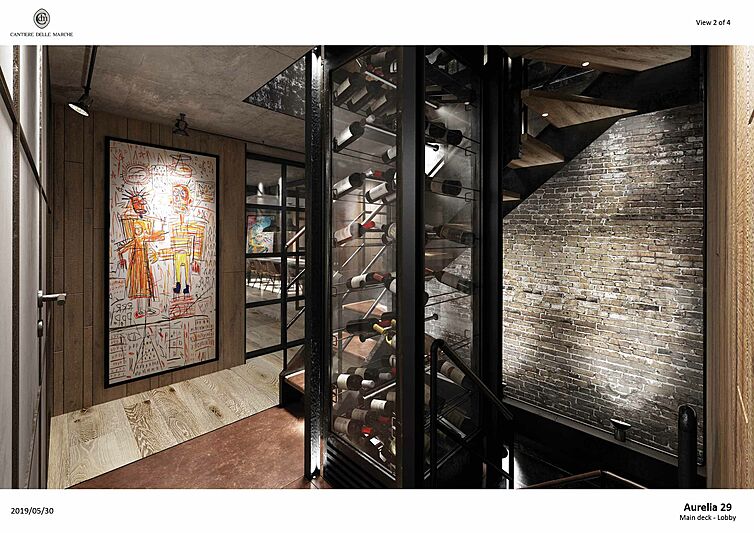 Photo: Cantiere delle MarcheSuperYacht Times was the first media group to visit CdM after Italy opened up again for travel earlier this summer, so it was perhaps inevitable that the conversation eventually turned to coronavirus and its impact on yacht building. Although the phone did indeed stop ringing for a while, the market appears to have bounced back quickly for CdM and since the start of the pandemic it has closed new contracts for a Darwin Class 112 and a Flexplorer 140.

Following the initial shock, it seems that prospective clients who were previously too busy had the time during lockdown to think more about their future yacht projects.

“We discovered that clients had time on their hands and were eager to talk about boats,” says Buonpensiere. “I’m not saying that the market is booming, but we’re definitely seeing movement for both new build and used yachts. The reason may be that when clients are wrapped up in their work they tend to approach yacht ownership as a business proposition. But owning a yacht is not a business: it’s a lifestyle choice. I think the health crisis has probably heightened emotions and the realisation that family and friends are what matter most, which is what yachting is all about.” 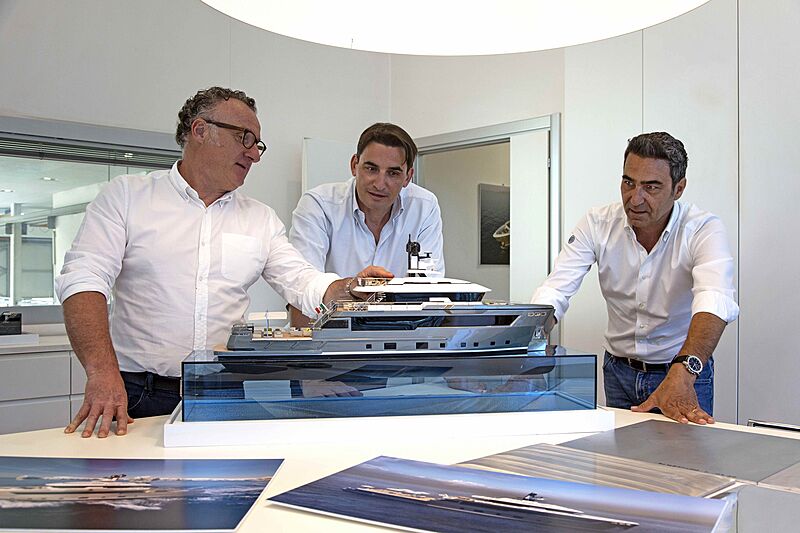