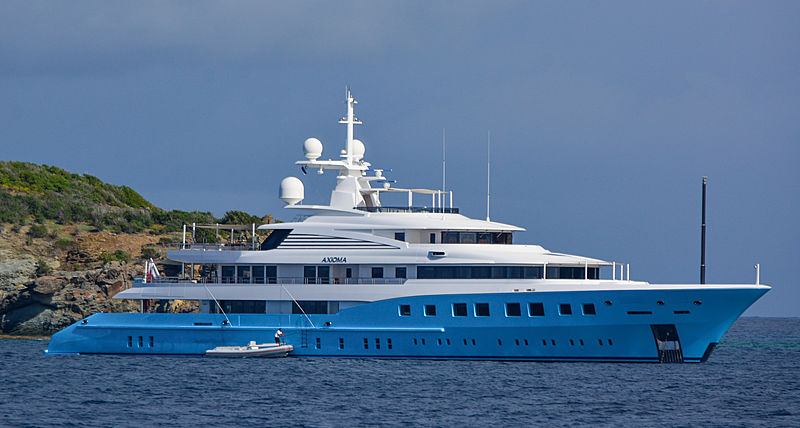 Photo: Nico CartallaThe 72.5-metre Axioma was seen recently in the Caribbean showing off her new paint job, which she received last year at Astilleros de Mallorca. With an exterior design by the Monaco-based Sterling / Scott as the studio’s first new-build project and interiors by Alberto Pinto, Axioma (once known as Red Square) was delivered by Dunya to her original owner in 2013. On board, she accommodates up to 12 guests in six staterooms including a master with a blue marble en-suite bathroom and a spa bath, a VIP suite located on the main deck and four double staterooms, two of which can be converted into twins. Guests can be taken care of by up to 22 crew members who can sleep in 12 cabins. With a central elevator connecting all four decks, guests can reach amenities such as a large aft swimming pool, a Jacuzzi with swim-up bar, a spa, an open-air gym and a 3D cinema for up to eight guests. Also with her wide selection of toys such as a waterslide, paddleboards, kayaks and jet skis, Axioma has become a popular charter yacht.

Exploring St Barths on board the 73m yacht Axioma