The Yacht & Brokerage Show in Miami Beach reported a significantly stronger show overall than the past several years, with the number of exhibitors and boats on display both up 9 percent over 2011. Attendance, based on concession sales and number of people using show transportation at the free-to-the-public event, was up more than 7 percent. Most importantly, notably strong sales activity was reported by numerous builders including Fairline, Viking, Ferretti, Hatteras, Westport and Marquis and brokerages including Allied Marine, HMY and Merle Wood, among others.

"The show was a tremendous success this year," said Andrew Doole, senior vice president and COO of Show Management. "We had more exhibitor participation and the reports are of more qualified buyers than recent years, both signs of a strong industry and a strong show."

"This year's Yacht & Brokerage Show was the busiest Miami show Denison Yacht Sales has ever had," said owner, Bob Denison. "We introduced the Monte Carlo 76 to the U.S. market and our displays in TrawlerPort and at Beneteau Gran Turismo were slammed every day. Two Beneteau Swift Trawlers and eight Gran Turismos were sold at the show." 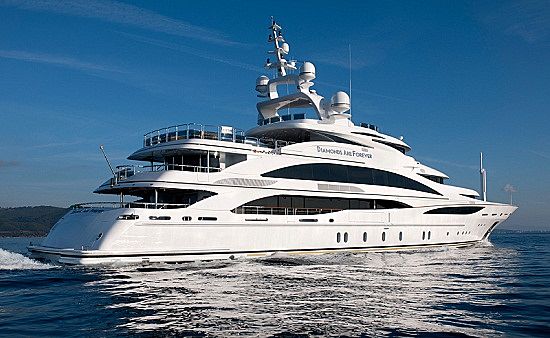 For sale at this year's show were two of the largest yachts ever offered at The Yacht & Brokerage Show: a 200' Benetti, Diamonds Are Forever, and a 191' Trinity, Carpe Diem. Both garnered attention from qualified buyers.

"It was an incredibly positive Yacht & Brokerage Show for us, and the boat we had on display, Shooting Star, caused a real stir," said Neil Cheston, director of sales and charter with Y.CO. "We definitely intend to have an even bigger presence at next year's show."

"The show brought us many qualified customers," said Alan Murphy, Jr., vice president of Pioneer Linens Yacht & Estates Division and a show sponsor. "What was refreshing was the number of new show visitors traveling to the show as a destination."