An Exceptionally Nautical September in Porto Cervo by Barby MacGowan

The Yacht Club Costa Smeralda (YCCS) had it all going on this September. Located in Porto Cervo, Italy, the club regularly hosts awe-inspiring events throughout the Mediterranean sailing season, but September 2007 stood out as a veritable festival of sailing. The occasion was the 40th Anniversary of the YCCS, established by his Highness the Aga Khan (and a small group of Founder Members) in 1967 after he settled on the sparsely populated island of Sardinia in the early ‘60s and – as the story goes -- bought land from the Sardinian women who controlled the purse strings in all business transactions at the time. 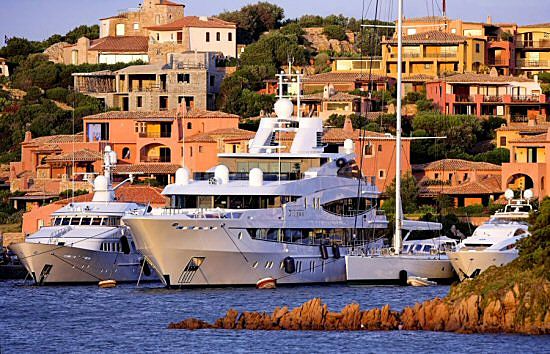 Four decades later, Porto Cervo is a vibrant destination paradise, synonymous with luxury living and bustling with activity during the "high season" of May through September. Yachting is as integral to the lifestlye in Porto Cervo as the Sardinian mistral is to creating epic sailing conditions or the "tafoni" (wind- and sea-sculptured granite rocks) are to dramatically enhancing the natural beauty of the island’s "Emerald Coast," Costa Smeralda.

It is within this natural order that the YCCS has defined its place by luring magnificent racing machines and talented sailors to impeccably run competitions and stylish social events. The clubhouse, creating an ancillary hub of activity only minutes away from Porto Cervo’s center, is often referred to as the Aga Khan’s "second home," where visitors are treated as special guests. It houses his rare collections of America’s Cup paintings, ancient nautical charts and bone-and-horn ivory ship models, while at the same time replicating the ambience -- through its distinctive architecture -- of a ship headed to sea. 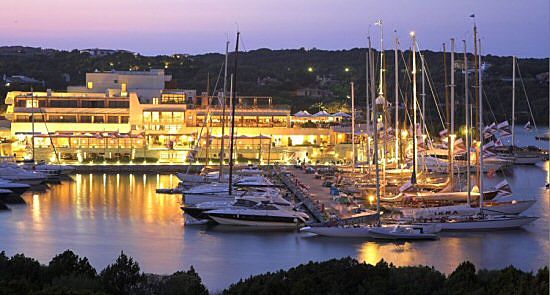 Though relatively young by most standards (many sporting fraternities can trace their histories back hundreds of years), the YCCS is one of the most revered yacht clubs in Europe, if not the world, resting solidly on the Aga Khan’s founding principals of uniting nautical enthusiasts and promoting the sport of sailing. Accordingly, the club has given birth to a string of internationally renowned regattas, including the Settimana delle Bocche, Maxi Yacht Rolex Cup, Rolex Swan Cup and Sardinia Cup, while pioneering various sporting achievements, including Italy's first America’s Cup Challenge in 1983 with the 12 Metre Azzurra (with a re-appearance in 1987 as the Challenger of Record) and the Blue Riband Award for the transatlantic powerboat crossing record in 1992.

And the Celebration Begins 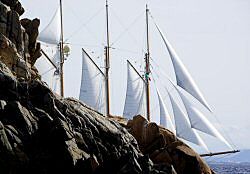 The 40th Anniversary celebrations started with a formal dinner on May 12, 40 years to the date of the club’s founding. It was followed by three of the YCCS’s regularly scheduled high-powered sailing contests and an awarding in August of Golden Burgees for sporting achievements to such accomplished yachtsmen and YCCS members as Luca Bassani Antivari, Dario Ferrari, Michael Illbruck, Vincenzo Onorato, Bob Oatley and Angelo Vassena. September then ignited with the Maxi Yacht Rolex Cup (September 2-8), which brought to Costa Smeralda’s shores some of the world’s largest and fastest grand prix racing yachts – among them eventual class winners Atalanta II, owned by Italy’s Carlo Puri Negri; J One, owned by France’s Jean Charles Decaux; Ranger, owned by USA’s John Williams; and Morning Glory, owned by Germany’s Hasso Plattner.

All told, 38 entrants represented 11 countries, putting on a colorful show for spectators, who watched the racing from private and chartered yachts and, back at the dock, rubbed shoulders with the "rock stars" of international sailing. 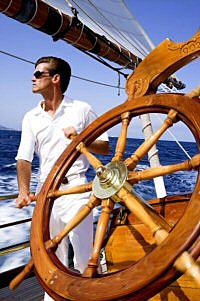 "It was great competition with the other 80 footers on the water," said Decaux. "We have had some very good days especially with the wind. This year has been perfect with flat water. It continues to be one of the best spots in the world to sail."

It’s not often one gets the chance to see an ultra-modern Maxi sloop start on the same line alongside a classic yacht, but that was the sight enjoyed by both the participants and spectators at the club’s official 40th Anniversary Regatta (September 10th). Strategically scheduled between the Maxi regatta and the Rolex Veteran Boat Rally (September 12-15), the event hosted a total of 50 boats, many of which have helped shape YCCS history. They also spanned nearly the entire history and size spectrum of international yachting. 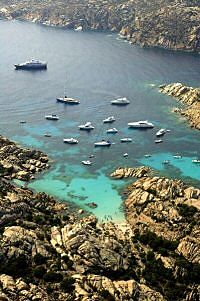 Although the 40th Anniversary Regatta fleet was divided into various divisions for scoring purposes, a single start at noon sent competitors off on a 22-mile course that took them south to the islands of Mortorio and Soffi (part of the famously stunning Archipelago of Maddalena) before rounding a mark in the bay of Cala di Volpe and heading back to the finish line off Porto Cervo.

This time 15 Maxi yachts were vying for class honors, and it was Alfa Romeo who ultimately won its class, over such standouts as Rambler, owned by the USA’s George David, and Loki, owned by Australia’s Stephen Ainsworth. Two-time America’s Cup winner Courageous, owned by the USA’s James Gubelmann, led her fellow 12 Metres around the course from the outset but claimed victory with only four seconds to spare at the finish line.

The prize giving took place during an open-air party at Porto Cervo Marina, where the club’s famous Piazza Azzurra accommodated over 1,000 invited guests. Reminding participants why they were gathered for such memorable celebrations, YCCS Commodore Gianfranco Alberini said, ‘"We are delighted to have reached this important milestone and to have achieved such an impressive track record at such a ‘young’ age. Our accomplishments are credited to a great deal of hard work and determination and to the professionalism and expertise of the people who have collaborated with us over these past 40 years. The club’s anniversary events of 2007 have given us the chance to thank them and to celebrate together with the new generation of sailors whose drive and vision will take us through the next 40 years."

Then There is More

Forward thinking notwithstanding, the momentum continued the very next day with the Rolex Veteran Boat Rally. The event showcased 30 historically significant yachts in all their varnished-wooden glory. Class winners again included Emeraude along with Mariette, from France, and Marjatta, owned by Italy’s Giovanni Broggi. A special 12 Metre series was won by Kookaburra II, chartered by Italy’s Patrizio Bertelli; Freedom, owned by the USA’s Ernest Jacquet and chartered by fellow American Clayton Deutsch; and Ikra, owned by France’s Yves-Haire Morault. Mariette skipper Charlie Wroe complimented the YCCS Race Officers on an excellent job setting appropriate and interesting courses. "I love racing in Sardinia," he said. "It is a brilliant, brilliant place to sail -- just beautiful."

Just like the yachts that had graced the waters over the five days of racing. 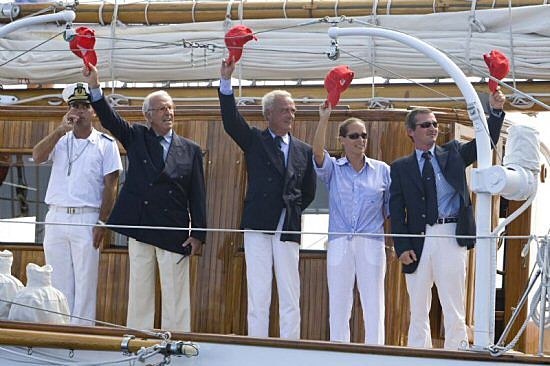 On the final day of the Rolex Veteran Boat Rally, as tradition demands, the fleet paraded past the saluting vessel, which this year was the magnificent Croce del Sud, carrying YCCS dignitaries, including the Princess Zahra Aga Khan (President of the Board of Directors), Commandante Gianfranco Alberini (Commodore); and Commandante Edoardo Recchi (Secretary General). At the prize giving, the winners received their trophies and Rolex Yacht-Master timepieces. 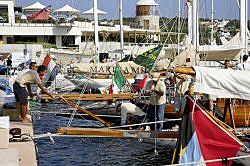 The YCCS race office, with its apparent endless energy, took but a few days’ rest before welcoming the Rolex TP52 Global Championship (September 21-29), followed immediately by the Moby M30 World Championship (October 1-7), and then re-located to Tenerife for the start of the Transatlantic Maxi Yacht Rolex Cup (November 26).

So while it is said that nobody is just passing through Porto Cervo on the way to somewhere else, it is also notable that sailors with worldly ambitions view the YCCS as a destination unto itself -- a place to experience at least once in their careers and to which good fortune hopefully will return them. And while 2007 will go down in the YCCS history books as a year of celebration, the club’s festival of sailing really never ends -- it only takes a winter holiday. 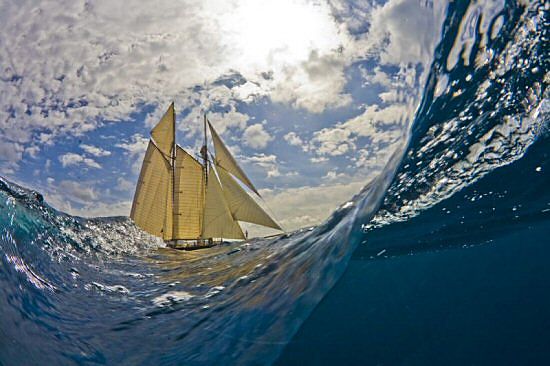