In style appropriately “fit for a king,” a shipload of luxury yachts will arrive at the Dubai International Boat Show and the inaugural Abu Dhabi Yacht Show (set for March 3-7 and March 12-14, respectively) next year. The royal ride for the vessels will be Dockwise Yacht Transport’s (DYT) super ship Yacht Express. 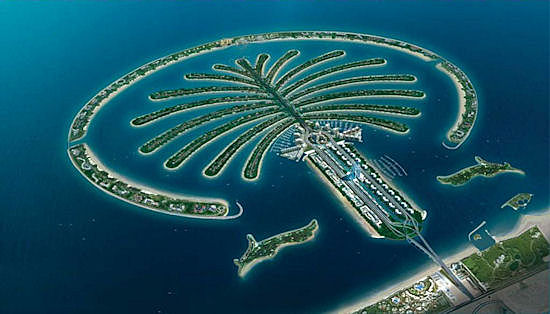 The largest vessel of its kind in the world, Yacht Express is 687.5-feet (209 meters), a length almost two-thirds the height of Dubai’s iconic Burj Al Arab (Tower of the Arabs). And while the Burj Al Arab is designed to mimic the sail of an Arabian dhow, the Yacht Express claims its own signature visual—it “sinks,” either dockside or a short distance from the waterfront to allow yachts of any size to arrive by their own power and be safely floated on and off as cargo. Traditional carriers, on the other hand, use a lift-on/lift-off method with hoists and straps.

“This will be the first time Yacht Express has visited the United Arab Emirates (UAE),” said Clemens van der Werf, president of DYT, which is based in Ft. Lauderdale, Fla., and maintains an entire fleet of semi-submersible carriers devoted specifically to transporting yachts. “It sends a strong message in support of Dubai’s and Abu Dhabi’s initiatives to develop the UAE as an international yachting destination, which includes world-class marinas and unrivaled opportunities for sport fishing, yacht racing and cruising.”

Matthew Bate, Regional Director of Marina Operations for Island Global Yachting (IGY) Middle East, agrees. “IGY is pleased to see the Yacht Express in our backyard, as the arrival adds to the growing international appeal of the Middle East's waters as a luxury megayacht destination.” Bates explained that IGY is helping to create 20,000 new berths in Dubai, and its marina locations include the Palm Islands (Palm Jumeirah, Palm Jebel Ali, and Palm Deira), which are the largest land reclamation projects in the world. 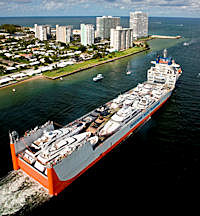 Yacht Express will leave Ft. Lauderdale early next January, adding boats in Rotterdam and Genoa before arriving in Dubai at the end of February. The ship will then reverse its route after the shows, with a stop in Genoa set for early April and arrival back in Ft. Lauderdale due for mid-April.

“Yacht Express made its maiden voyage from Ft. Lauderdale to Genoa, Italy, this April with a mostly-megayacht load worth $154 million,” said Van der Werf. “It has crossed back and forth across the Atlantic several times and made its official debut ‘Down Under’ in July. The Arabian Gulf, like the Mediterranean, is now slated to be on the regular yearly routes of Yacht Express.”

The size and power of Yacht Express (it has a service speed of 18 knots) typically pares down transport times, delivering your yacht in record time. In addition, Yacht Express provides yacht owners with a state-of-the-art transport facility including extra accommodations for crew who are riding along. More than 130 feet longer than DYT's other carriers, it features such added amenities as complimentary cabins, an atrium with lounge bar, outdoor swimming pool, restaurant, as well as conference, media and fitness facilities.

While the safe and efficient float-on/float-off process is unique to DYT, it is personal professional service that sets DYT apart as a leader in shipping private luxury yachts around the world.