This is the story of two daring helicopter expeditions into the highlands and lowlands of the wild and wonderful south-west region of Papua, eastern Indonesia, which happened thanks to The Lighthouse Consultancy. The Indonesian-based company’s in-field experience and meticulous planning enabled us to sample what very few visitors to Indonesia have had the opportunity to experience; to meet with two infamous tribes with markedly different lifestyles on their home turf and to enjoy their customs, ceremonies and performances, and even their food. 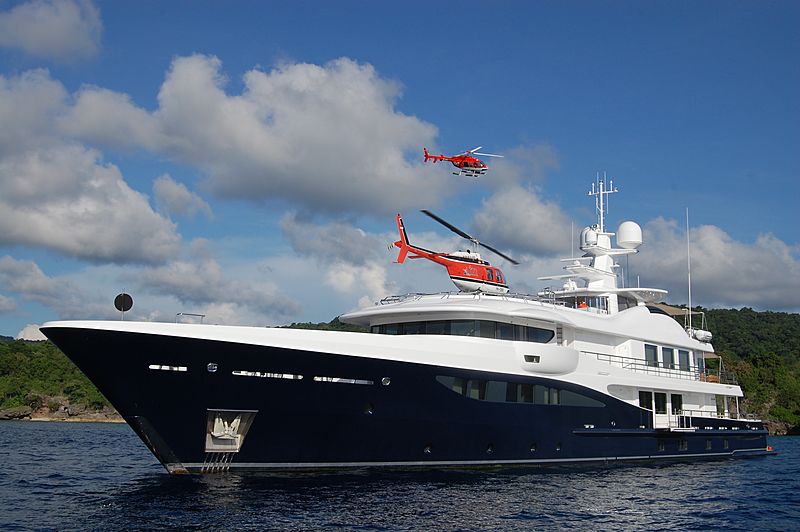 Our memorable 48 hours began on board the 55-metre Amels yacht La Familia, where together we had already covered the amazing western coastline, from Raja Ampat to the Fak Peninsular and Triton Bay before arriving (as the first superyacht to visit here) at the river port of Pomako which became our base for operations. We planned to visit two remote tribes, the Dani and the Asmat, who reside in two distinctly different regions of West Papua.

The Dani are mountain farmers who occupy the fertile highlands of the Baliem Valley, an alpine basin over 2,000 metres above sea level bordered by mountain ranges and ridges that rise to over 4,000 metres. This Shangri-La was only discovered in 1938, sighted by an over-flying plane. 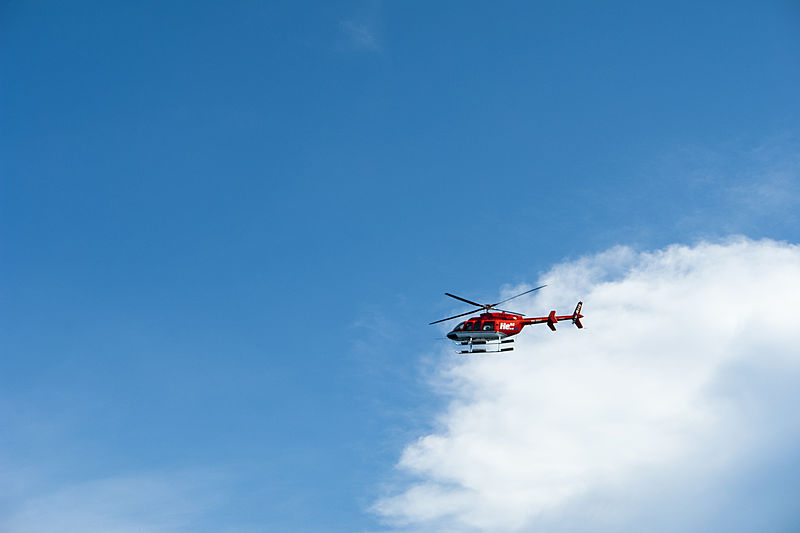 The Asmat on the other hand, are fishermen and hunter-gatherers residing in the muddy swamps, forests, river deltas and small islands along the Papuan coastline. These folks have long been infamous for their cannibalistic rituals and at one time were involved in the disappearance in 1961 of Michael Rockefeller, the son of Nelson Rockefeller, the Governor of New York at the time.

After an overnight motor down from Triton Bay, La Familia is expertly navigated around the shallow sandbanks and through the narrow channel that leads into the Pomako river and coastal port of Amampare, just in time for our rendezvous with the two choppers, our air transport for the next two days. After dropping anchor into the muddy waters, we are soon in the air, flying across the low-lying jungle and rivers of south-west Papua where we are treated to spectacular views of the long snaking waterways and impenetrable forests of this remote region. 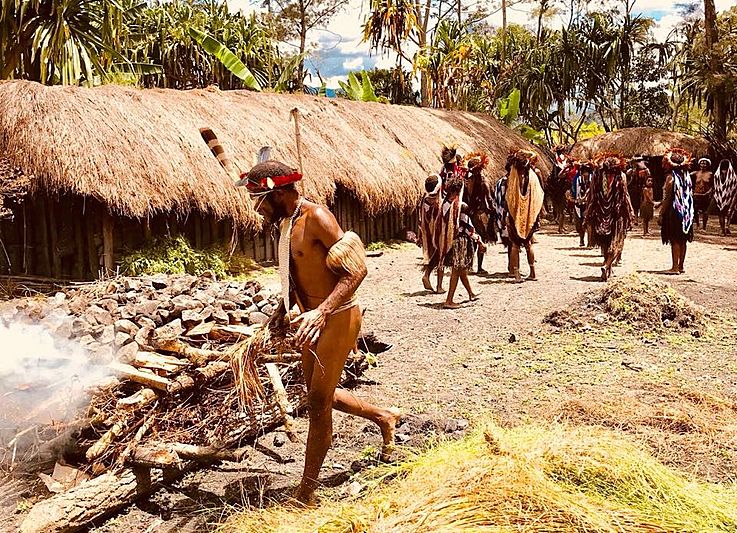 Our first destination was the Baliem Valley and the Dani tribe way up in the highlands and before long, the waterways and jungle fade away and we started to climb up into the mountainous interior of this mysterious island and negotiate the high ridges of the Sudirman Range, of which Puncak Jaya, the highest peak at 4,884 metres in Australasia, can be found. Although we don’t have to fly that high, we still have to search for gaps at over 3,000 metres, while as we rose the scenery got even more spectacular. High rocky peaks and passes dominate the panorama and once over the ridge, the scenery got even better with dramatic waterfalls plunging into deep valleys dotted with pine forests and immense rock falls. As we start to descend, tracks and small settlements come into view and the landscape is so different from the lowlands - it has an alpine feel to it; a little like flying over the European Alps in the summertime. 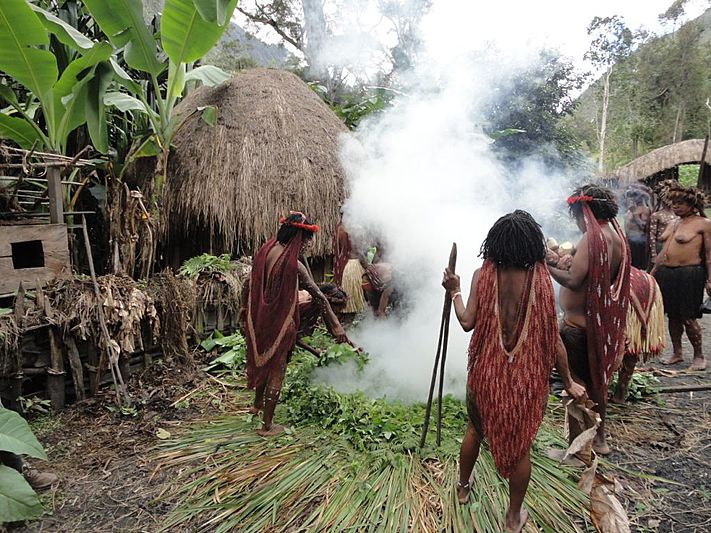 After this breath-taking flight of over 140 nautical miles, we land in the cool grasslands of the bucolic Baliem Valley to be greeted by members of the Dani Tribe. The Lighthouse Consultancy had been working on setting up this meeting for a while now, but it’s still a bit of a shock to be confronted by a large group of fierce-looking men who were naked, apart from their strangely shaped “koteka”, a covering made from dried-out gourd that barely managed to hide the most important part of their nether regions. They also sported boar tusk nose ornaments and a variety of bird feathers, most notably cassowary, body paint and other adornments. The topless, grass-skirted ladies of the tribe gathered in the trees a little further away by a wooden bridge over a narrow stream, waiting to greet us before taking us to their homesteads.

Firstly, we are treated to a demonstration by the men on how to construct a look-out tower from the trunk of a tree. This involved digging a deep hole and inserting the wood, raising the totem into a vertical position and then, after securing the structure, winding vines around the trunk to form footholds to enable the look-out to climb to the top and check for any approaching enemies. Fortunately, we didn’t see any.

After this feat of rustic engineering, we are taken along the stream to one of the compounds in the village where a feast was being prepared and attractions such as traditional dancing and singing were in full swing. During these festivities, many gifts are exchanged, one of which is the presentation of a lethal-looking bow and arrow set from the Dani while we reciprocated with medical supplies. 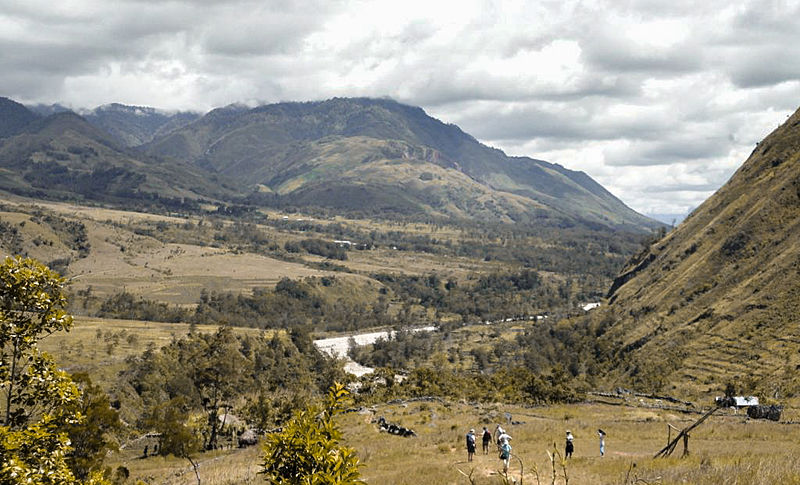 The preparation of the main course is not for the squeamish. A small boar is selected and held up by its ears and the back legs by two tribesmen, while another takes the archery set and expertly shoots the poor animal straight through the heart. Fortunately, this is a quick albeit rather undignified end for the main course.

While all this is going on, a huge rectangular fire was being built from of dry wood and straw covered with rocks and large stones. The idea is not to cook the food directly on the fire but to superheat the stones and use their latent energy to slowly broil the ingredients in a leaf-filled earth oven, known as a “mumu”. An ignition source is produced remarkably quickly by placing some tinder on the ground and pulling a tough vine vigorously back and forth around a small piece of wood, something I was never able to do in the Boy Scouts. This produces enough heat to ignite the tinder which is then introduced to the bonfire and a good old smoky time is had by all. 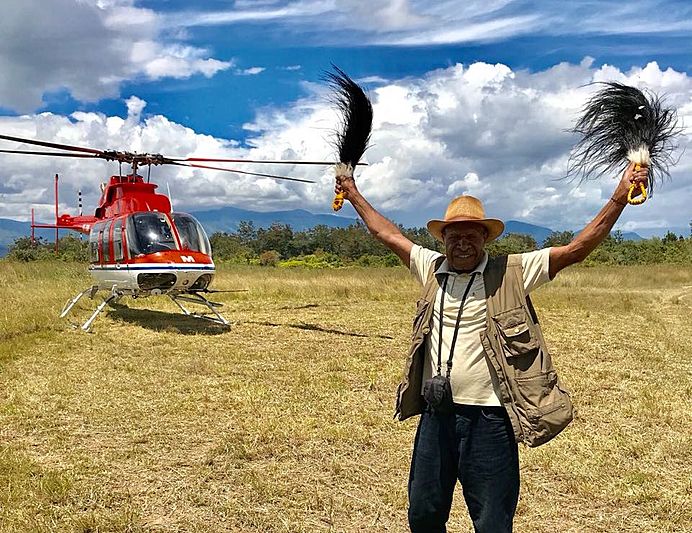 After several courses of soup, roast pork and vegetables, it's time to make our long way home back to the yacht. Our Australian pilots are getting a little anxious about getting back over the mountain range before the weather closes us in. We say our fond farewells and climb aboard the helicopter for the exciting flight up and over the mountains that have hidden the Baliem Valley for centuries, to return tired and smelling very smoky to La Familia, to get ready for the next days’ adventures. 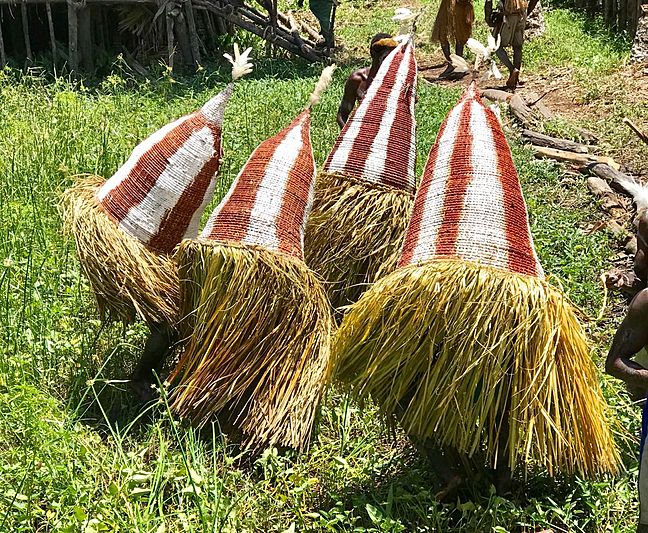 After a good nights’ rest, we are off again on another “same-same but different” encounter with the infamous Asmat Tribe. We headed 112 nautical miles south-east along the Papuan coastline down to the Agats area and the village of Omandesep. The flight over the alluvial plains, muddy river deltas, impenetrable mangrove forest and sprawling swamps is no less mind-blowing than the day before, except this time we don’t have to deal with any high elevations, which makes things a little easier.

As we make our descent into Omandesep we make out two custom-made wooden landing pads for our flying machines. Although some of the more adventurous dive boats have visited the area, our expedition is the first to use helicopters and a landing would be a tricky business if not for the help and planning of The Lighthouse Consultancy and the sturdy constructions made by the villagers. We touch down and are immediately greeted by the fearsome-looking Asmat elders dressed in their finery. All is going amicably well when suddenly hordes of wildly painted and seemingly aggressive tribesmen come rushing from the bushes throwing spears and making one hell of a noise, their frantic and alarming wild gestures making us think that we have made a very bad decision! Fortunately, it is just part of the show, although some warning would have been nice. 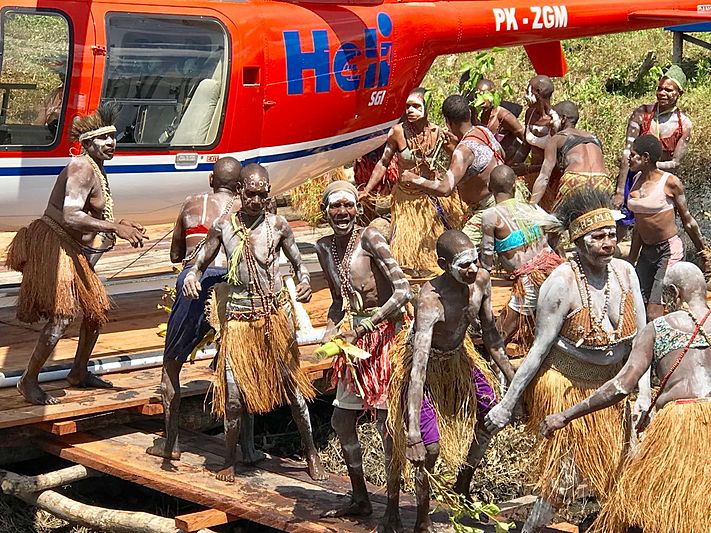 The Asmat have a reputation for being a little confrontational and their inter-village squabbles and arguments have caused stories about the tribe killing and eating their enemies in revenge for unknown misgivings. On this occasion, we are thankfully greeted as friends, not enemies, and the squad carry on their thrilling introduction by surrounding the helicopters, chanting and dancing in the mud.

Like the Dani tribe, the Asmat are dressed in their colourful tribal finery and although they keep their crown jewels under their grass skirts, they appear to wear more body paint with many decorated in elaborate and scary designs. Others wear strange masks that resemble crabs, crocodiles and other river creatures; certainly not the sort of people you want to meet in the dark! 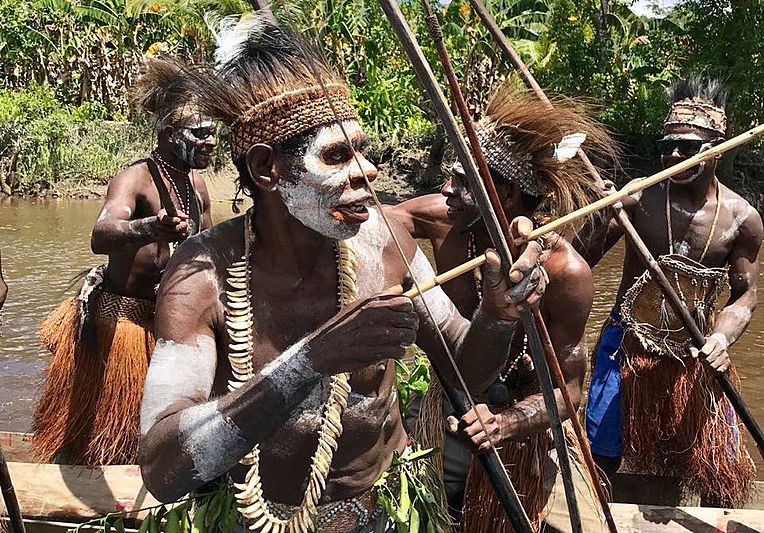 After these wild introduction ceremonies, we are taken off, with a great deal of hooting and hollering, along an elevated wooden walkway to a dock to board some large canoes for what we think is going to be a quiet cruise down a very muddy crocodile-infested waterway. Suddenly from one of the many tributaries that drain into the river around 50 warlike warriors come racing out, fully armed, in their dugout canoes. Exhibiting sublime balancing skills each of these fast and very mobile canoes is manned by up to six men, standing up while rowing, bristling with weapons and once again making a huge hullabaloo. 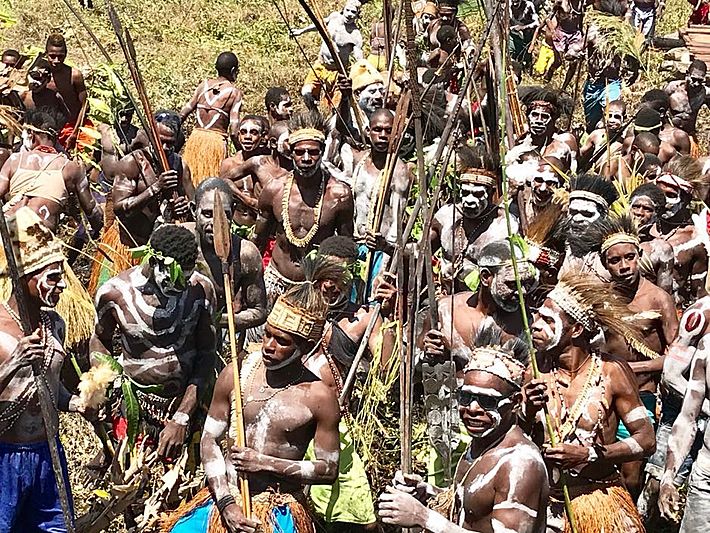 As the shock of this second attack subsides, we are all captured and taken back to the village dock, for who knows what, but we do imagine a big cooking pot hanging over a raging fire. Happily, this is not the case, and instead we enjoy some good-natured mudslinging and a playful beating with some soggy bamboo by some of the tribeswomen, all in the name of good relations.

The next event is a visit to the chief’s long-house for a formal reception and an exchange of gifts. This is only a short walk from the dock and we all pack into the very smoky and low-ceilinged elevated construction to hear several speeches before being treated to a spirit dance. This strange ceremonial knees-up involves some bizarre costumes worn by the participants, consisting of a woven cone-shaped headpiece finished lower down with grass skirting. There is no way to see out of this ensemble and the wearers are led around on twine leads while dancing in a wild and bizarre spinning motion. 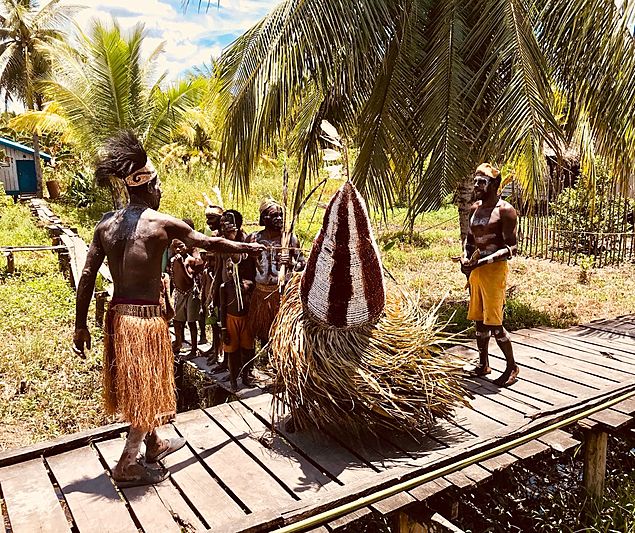 As our escapade comes to an end, we are allowed to look at and buy some items of Asmat art and craft that have become fashionable among artefact collectors in recent years. One of the most popular purchases is a woven mask complete with sunglasses and crab claws which would certainly turn heads on the runways of New York, London and Paris.

The Lighthouse Consultancy specialises in custom-tailored expeditions into many of Indonesia’s most remote regions. Extraordinary topside experiences are available to voyagers wanting to push the limits of what is possible during a cruise across the diverse destinations spread all over the remarkable Indonesian archipelago. To find out more about how to book your expedition, contact the company directly via the details found below.

Travel: Go back to the Maldives with superyacht RoMEA