The famous sailing yacht M5 (formerly Mirabella V) is coming to the end of a major refit at NCA Refit part of The Italian Sea Group. After arriving at the yard in Marina di Carrara last April, she is due to leave in early February. 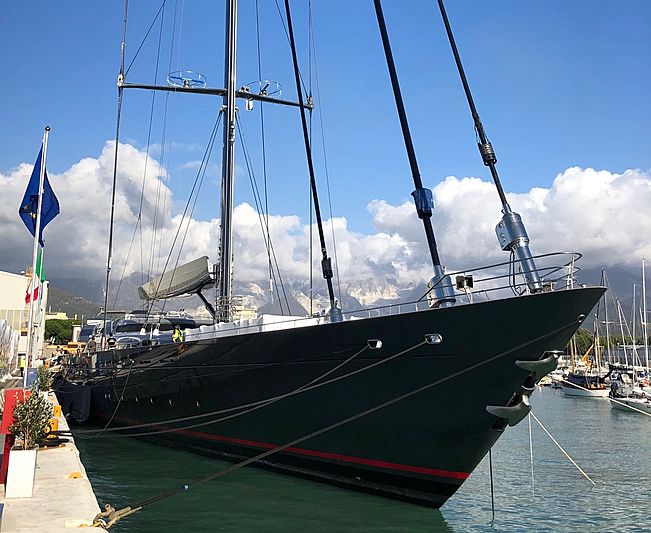 Photo: S/Y M5Mirabella V (pictured below) was built for Joseph Vittoria, the former CEO of the Avis Rent-A-Car company. His mission at the time was very simple: to build a sailing yacht with the biggest sloop rig in the world. He achieved his wish and at the time of her launch in 2004, Mirabella V broke a number of records. Designed by Ron Holland and built by VT Shipbuilding in the UK, at 75 metres in length she was the largest composite yacht in the world with an 89-metre rig. Her 151-tonne lifting keel varied the draught from 4 to 10 metres. 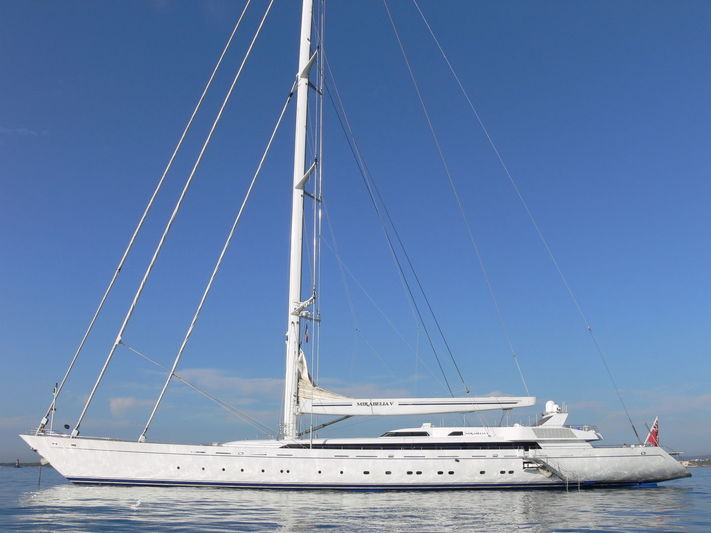 Photo: Merijn de Waard / SuperYacht Times“The current owner acquired the yacht from Vittoria in 2012,” says Capt. Don Anderson. “He’s an experienced owner but this was his first sailing yacht, so he was smart and sailed her for a year before deciding how he wanted to modify the yacht. He’s a keen pilot, so one of the first things he did was change the transom shape and extend the aft deck to carry a Carbon Cub seaplane.”

This first refit took place at the Pendennis shipyard in the UK and the yacht was relaunched as 77.6-metre M5 (pictured below) in 2014 with a new stern, major engineering upgrades, new Carbo-Link rigging and a refreshed interior by RWD. The composite rigging saved around 15 tonnes of weight and to compensate the 85-tonne bulb was cut off the keel to leave a blade with a sacrificial lead tip attached by fuse bolts designed to break off in case of grounding. This left the keel slightly unbalanced. 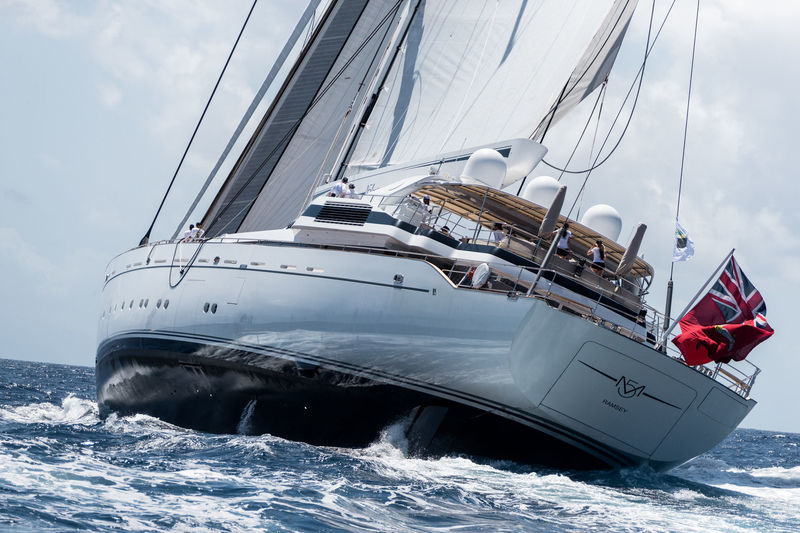 Photo: Jeff Brown / Breed Media“We knew the keel would be front-heavy, but we couldn’t address it because we ran out of time at Pendennis,” says naval architect Rob Doyle, who followed the original build and subsequent refits. “As a result, it made a lot of noise when it was raised and the keel box is right next to the owner’s head in his cabin. He enjoys night sailing, but when the boat arrived at a favourite anchorage in the early hours of the morning everyone on board would be awake!" 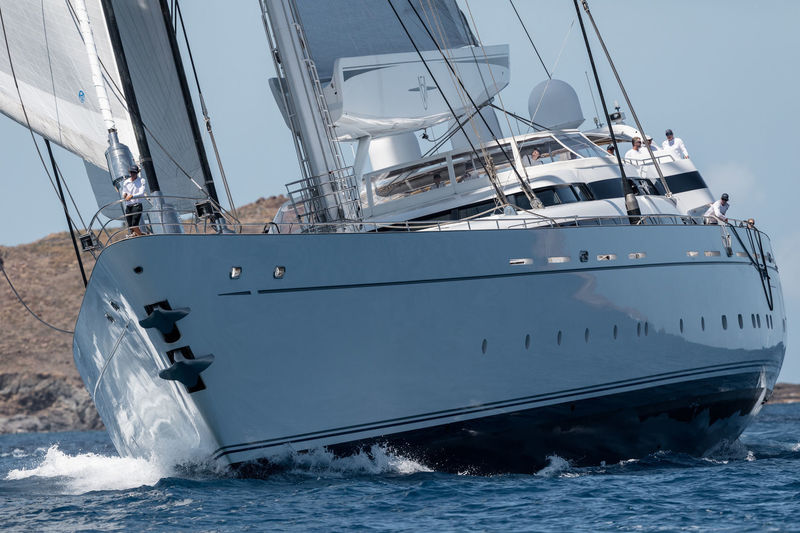 Photo: Jeff Brown / Breed MediaWhen M5 was due to undergo her 5-year Lloyds survey it was clear that remedying the keel problem would be a top priority. As the mast would also have to come out for inspection, the owner’s team chose the NCA shipyard because it is one of very few refit yards with the capacity and hard standing space to work on such a massive rig, which still holds the record for having the biggest mainsail hoist in the world (removing and re-stepping the mast was overseen by UK specialists Marine Results). 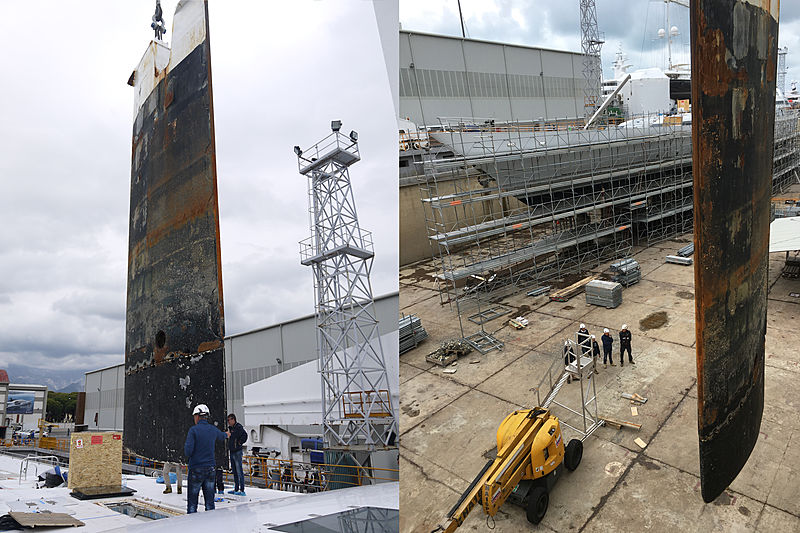 Photo: S/Y M5“We did a thorough analysis and went through a dozen different solutions, but eventually decided the simplest and most cost-effective thing to do was cut the keel in half and move the ram housing 300 mm forward,” says Doyle. “So we literally cut out a section in the middle, put it all back together and now it's perfectly balanced. All you can hear is the hydraulic pump when it's lifting. We were expecting a lot of drama, but the shipyard did an excellent job and it worked out really well.” 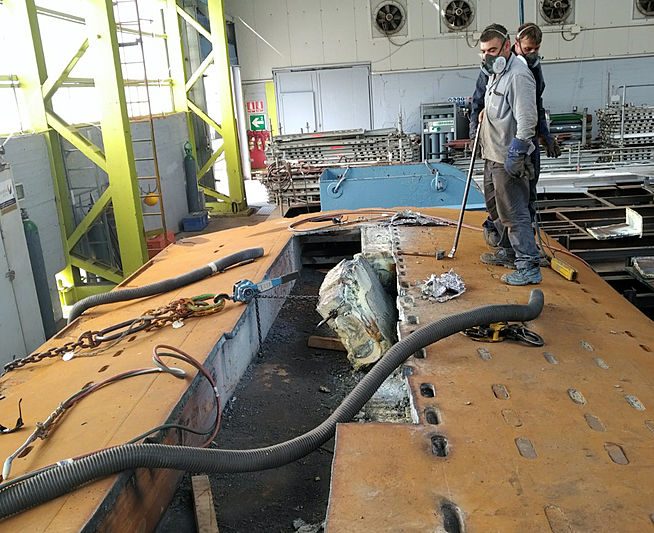 Photo: S/Y M5In addition to the keel modification – by far the most challenging intervention – M5 now has a new three-tone grey livery with a metallic palladium hull, anthracite silver superstructure and crystal silver mast and boom. Even the paint job was more complex than it might appear. The yacht was originally painted white for good reason as dark colours can lead to overheating and the aramid/vinyl ester laminate ‘gassing off’ chemical vapours. 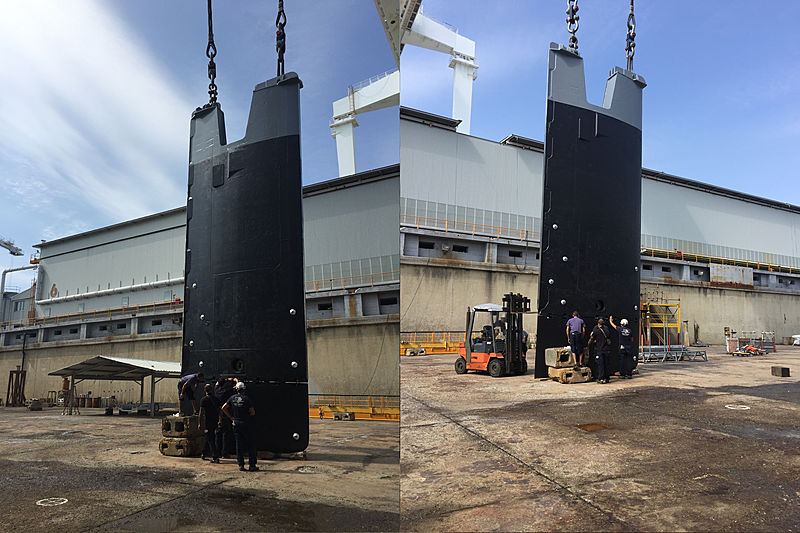 Photo: S/Y M5For this reason, the exposed superstructure and upper surfaces of the spreaders are painted a lighter shade of silver. Other upgrades include a new composite hardtop to replace the soft bimini on the flybridge, recaulked teak decking to match the silver paintwork, new interior flooring, carpeting and fabrics, new finishes in the bathrooms, and a massive Egyptian red jasper marble countertop for the bar in the main saloon. As a surprise for the owner, a crew member even painted a WWII aviation-style logo on the lower mast section that is visible through a viewing window inside the yacht. 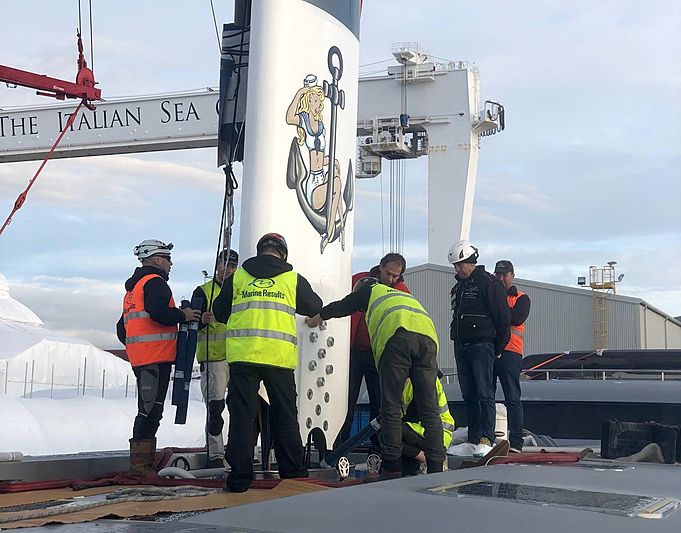 Photo: S/Y M5“M5 has been a challenging project from both an engineering and logistical perspective, but the results speak for themselves,” says Giovanni Costantino, chairman and CEO of The Italian Sea Group. “The refit market is important in its own right, but the experience and know-how we gain from these complex projects can be transferred to our new-builds, and vice-versa.”

Refit in action: how Cinderella IV became the award-winning G2