At her eagerly anticipated launch in La Spezia back in 2018, the 47-metre superyacht Ocean Dreamwalker III represented two important firsts for Italian shipyard Sanlorenzo: she was the first vessel in its brand-new 500 EXP line and the first superyacht to come out of the yard fitted with a helicopter landing pad. 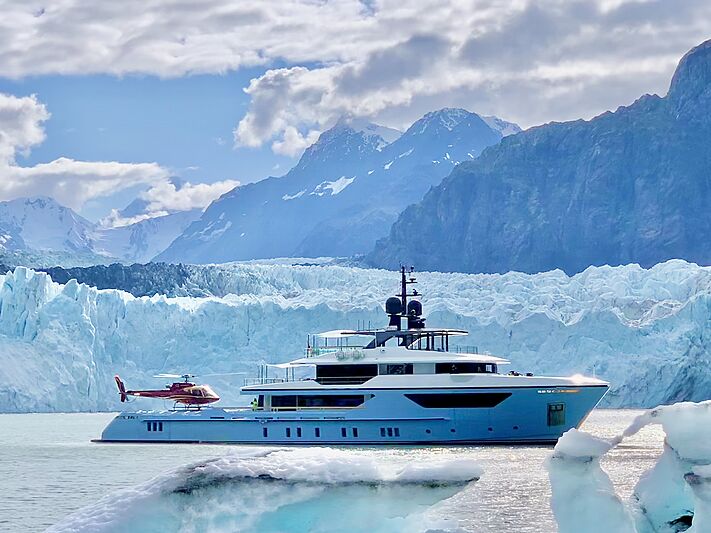 Photo: M. HsiehFor her proud owner, a Chinese-born genetic-testing technology entrepreneur and philanthropist, breaking new ground was precisely the point. Heavily involved in her construction from the get-go, the owner was looking for a perfectly sized luxury explorer-style vessel which would allow him to go inside popular ports such as St Tropez, Portofino and Monaco, but still offer the exploration capabilities for more adventurous trips.

As he explains, to achieve this, Sanlorenzo had to modify their existing 460 EXP model to accommodate a generous helideck in the rear and opted to hide the crane underneath the deck, with an additional area dedicated to a submarine found in front of the helideck. 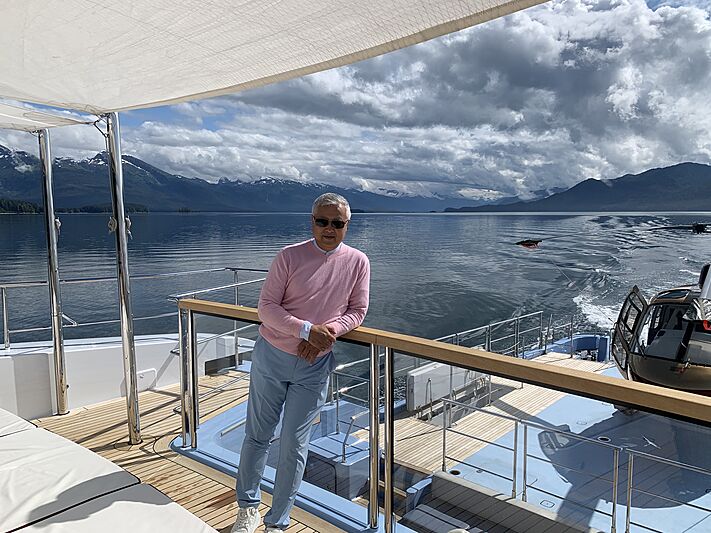 Photo: M. HsiehThe owner offers plenty of kudos to Sanlorenzo for their delivery of the vessel. “Among several other shipyards that I spoke to, Sanlorenzo was willing to accommodate a lot of complex design, engineering and operational challenges in order to fulfil my design specifications. I now have a boat which is designed to meet my dreams.” 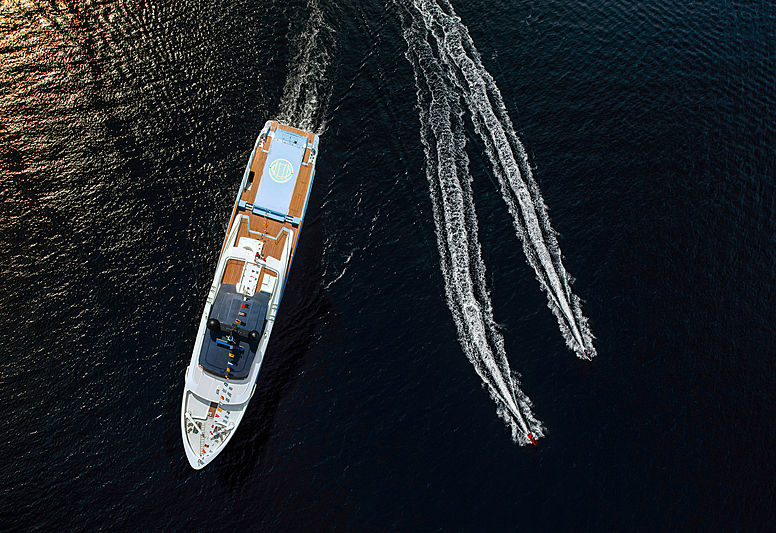 Photo: SuperYacht TimesIndeed, the impressive list of standout features on board Ocean Dreamwalker III includes a heated swimming pool, a jacuzzi and a skylounge with a long table to accommodate traditional Chinese dining. With her exteriors by Francesco Paszkowski, Sanlorenzo’s interior styling also fit the bill for Ocean Dreamwalker III’s owner, who mentions his fondness for the shipyard’s heavy use of marble in previously-delivered yachts.

Naturally, for a yacht designed with exploration at the fore, there’s the expected host of tenders and toys, including three Jet-Skis, Seabobs, a 6.4-metre Castoldi Jet and a 3.9-metre AB Jet tender, fishing gear, numerous inflatables and more. With all these top-class features, toys and tenders to enjoy, Ocean Dreamwalker III was ready to take on the world. 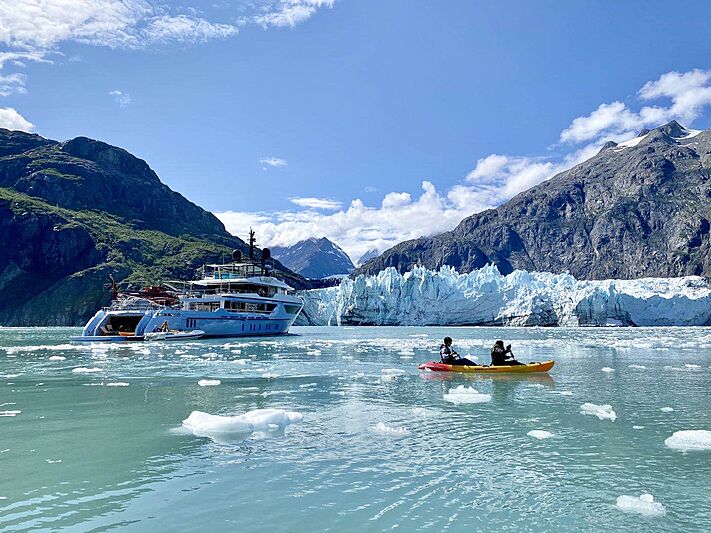 Photo: M. HsiehSkipping forward, 2020 kicked off fairly traditionally in yachting terms with a Caribbean season followed by The Bahamas. Ocean Dreamwalker III then underwent final warranty work at the Lauderdale Marine Center (LMC) in Fort Lauderdale before falling foul of the inevitable ‘C-word’, with travel stymied in March, trapping her crew on board for several months.

Following the loosening of travel restrictions, the yacht was finally able to embark on a trip through the Florida Keys before departing for the US East Coast in early July, transiting through the Panama Canal up to San Diego, then stopping at Santa Catalina Island, Newport Beach, San Francisco, Seattle, San Juan Islands, cruising through the Discovery Passage and Johnstone Strait before arriving in Ketchikan, Alaska, in August. 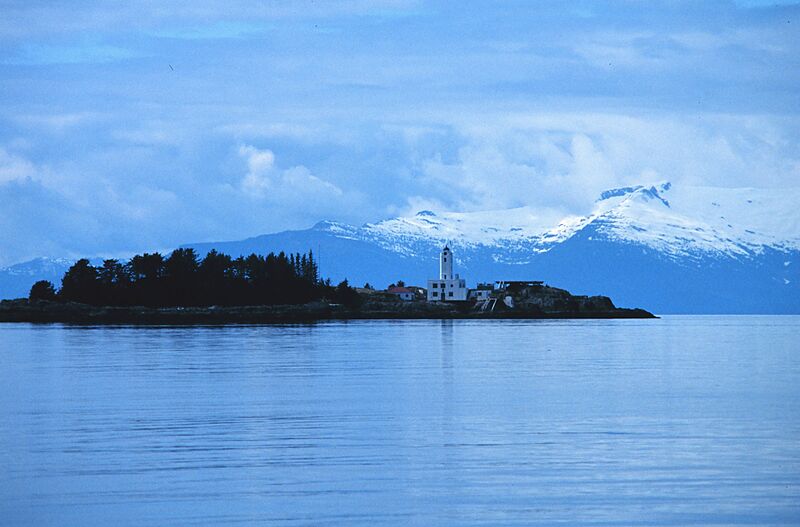 Photo: John BortniakAnd this is where we pause and take stock, because this is where Ocean Dreamwalker III was finally able to fulfil her owner’s original dream for his yacht: exploring the postcard-perfect scenery of Alaska. “This was a dream trip which I had been wanting to do for a long time – to see Alaska in the summer,” the owner reveals. “I have been before, but I always wanted to be there on a yacht with my family, with a helicopter and a bunch of toys.” 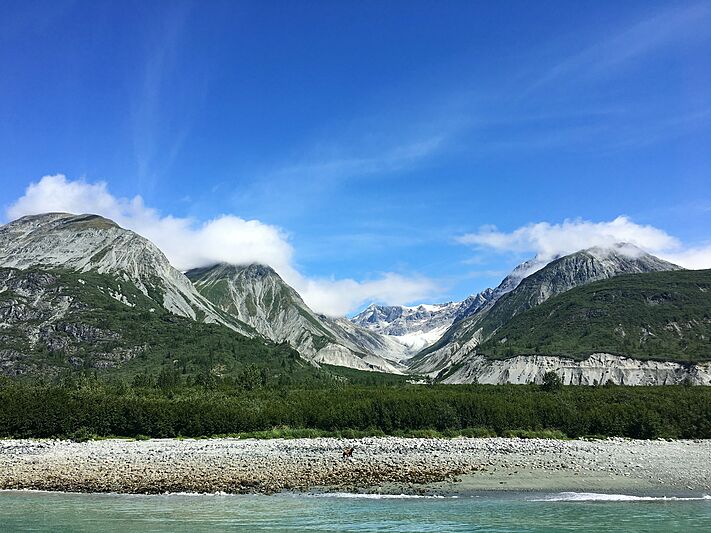 Photo: Victoria CrockerHardly a tourist hotspot at the best of times, his family and himself found utter peace and tranquility amidst the snowcapped mountains. “It was a shelter from what was going on in the world,” explains the owner. “The entire time we were there I only saw four other boats – no superyachts either, just three sailboats.”

Owner and family made the most of their solitary experience and immersed themselves in all that the country had to offer. “We went whale watching, fishing, enjoyed trips to hot springs, waterfalls and glacier parks and there was nobody else there. We got to experience the most wonderful, beautiful nature completely alone.” 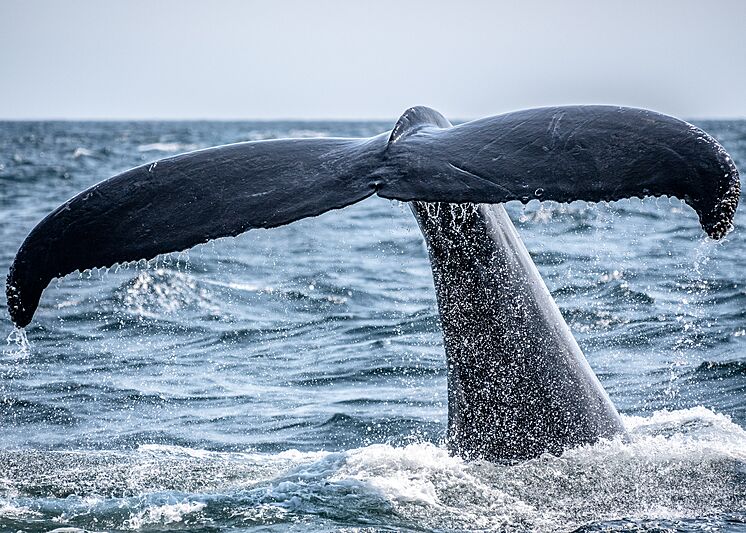 Photo: Richard SagredoThen, of course, there’s that famous helicopter. The second one to grace the yacht since delivery, it is a customised Airbus AS350B3e called Sky Dreamwalker VI. For her sociable and internationally minded owner, the helicopter is the ideal enabler, allowing him to balance his professional life with ample time spent with family and friends.

Not only can the helicopter be used for a plethora of functions, including sightseeing, reconnaissance trips, taking guests to and from the airport, remote landings, provisioning and enabling the owner to carry out one of his favourite hobbies wherever he is in the world (golf) but it also fulfils a vital business function for the owner, as was demonstrated during the trip this summer.

Photo: Bruce WarringtonAs the owner explains, “I might have a business meeting to go to but it is so convenient that I can fly out from the yacht and my family can continue their adventures. In just another hour, I know I can be back in beautiful nature once again, surrounded by glaciers, pine trees and whales” – a strong sell indeed for owners considering adding a helicopter to their superyacht arsenals. He continues, “Before you have one, you may not realise how wonderful it is to have a yacht with a helicopter. You are so flexible and you have so much freedom with your helicopter and your yacht, particularly in this Covid-19 time.” 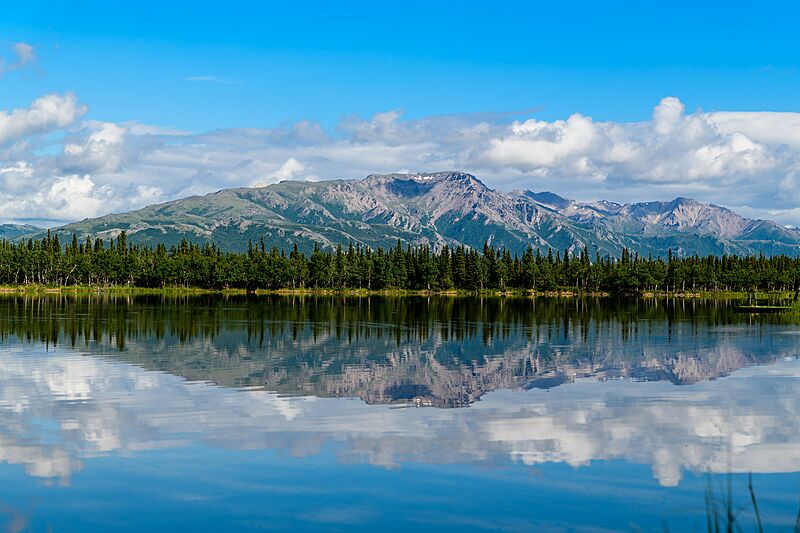 Photo: Hari NandakumarNotably too, this adventurous owner has asked HSML, the highly specialised helicopter and yacht management company who manage both the yacht and aviation operations, to provide him with training to gain his helicopter pilot’s license.

Being able to travel by helicopter opened up the sights of Alaska even more, enabling the owner to enjoy what he describes as a truly ‘three-dimensional’ experience of the natural wonders. “Most of the time, when you think about glaciers, they are just icebergs with peaks at the front, but we got to fly over and see them from a completely different perspective.” Indeed, the stories he tells are enough to inspire wanderlust in the most pandemic-weary of hearts. 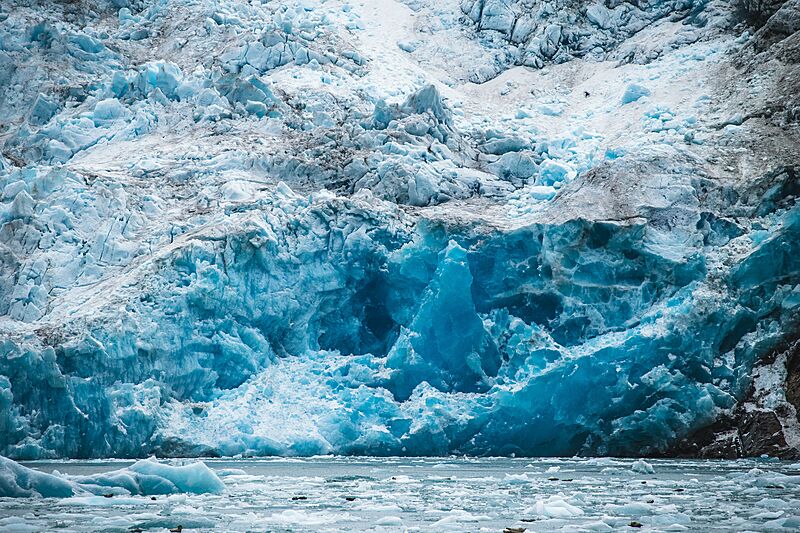 “We flew off into the mountains and found a beautiful lake, then we flew around the lake and over a waterfall, then we found another lake on top and kept following it and found a third lake on top! It was this incredible cascade of water - like being in a movie.” 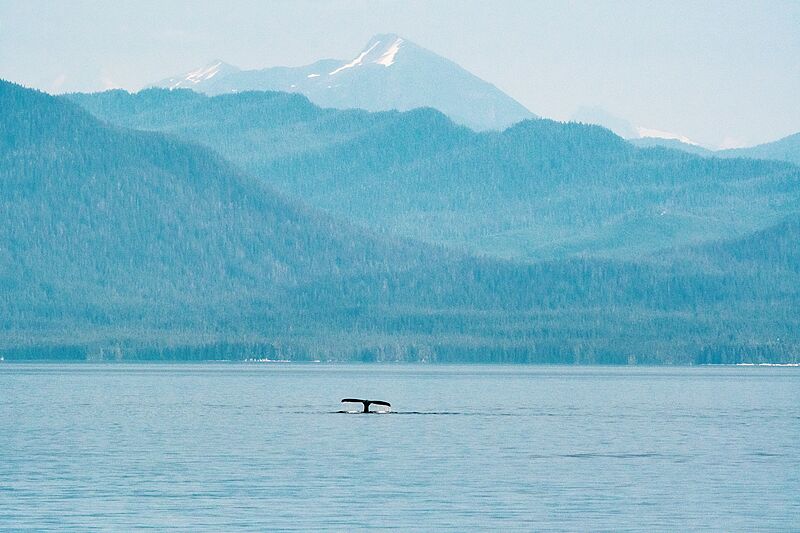 Photo: John YunkerBack on board, owner and family could enjoy all that Ocean Dreamwalker III had to offer. “It’s the whole boat, the whole experience. There is so much available for you: you’ve got your chef, your jacuzzi – we even have a swimming pool where we can seal off the water in front of the glacier so that the kids can swim in hot water even during the coldest weather. We also used our tenders to go out fishing. One time we dropped the cage and caught like 18 crabs.” 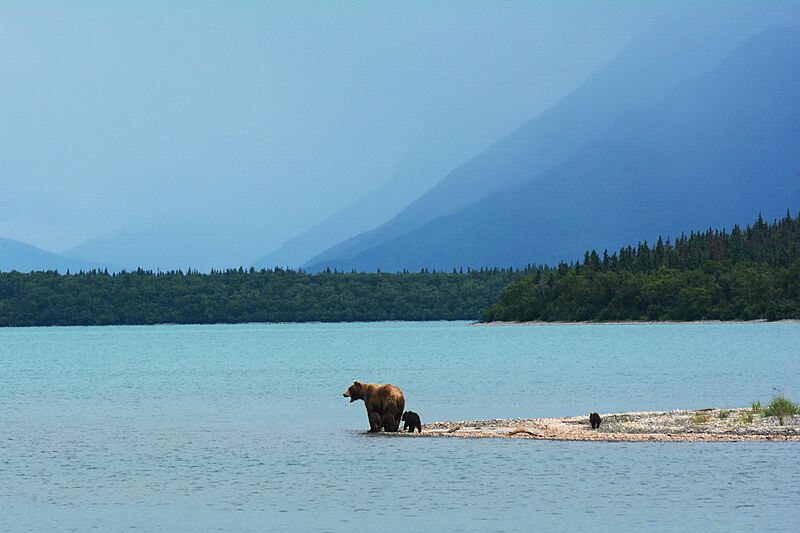 Photo: Paxon WoelberAnd, as if the scene couldn’t get any more magical, the owner has one more story to top it off, and it involves the balcony in the master suite: “The balcony takes up the entire side wall of the master room and you can automatically raise the rail without needing to ask any crew members for help, which I really like.

"There was this one morning when we pulled down the balcony, and we could see the whole of nature just laid out in front of us from the bedroom. Most of the time it is misty, but it was truly the cream of Alaska with a beautiful blue sky and, just under the balcony, about 30 yards away were five killer whales; five of them swimming next to the balcony. When I bought the boat I had no idea that I would get to experience this. It is beyond my words.”

Photo: Victoria CrockerSo, what’s next for Ocean Dreamwalker III? Well, they’ve flown high, so perhaps it’s now time to dive deep, with the owner explaining that he is keen to have a three-person submarine built and stored on deck for exploring water which is too deep for scuba diving – an aim made possible thanks to the onboard crane which was accommodated into the vessel’s original design structure.

And as for the question of where Ocean Dreamwalker III will be heading next, there is only one possible answer for her intrepid owner: Antarctica. “It is best to avoid meeting or doing a lot of things during this Covid-19 time, so I think this will be the perfect place for my yacht to visit next. We’re aiming to get across the passage to King George Island and the Antarctic Peninsula. I’m sure it’s going to be an amazing trip.”