YachtPlus, one of the worlds’ most exclusive fractional ownership companies, has announced that it will be launching its first superyacht this September at the Monaco Yacht Show.

Formed in 2005 by a group of financial investors, YachtPlus is rapidly becoming the market leader in fractional ownership and this year will introduce one of the most spectacular and exceptionally beautiful contemporary yachts to the market. Named YachtPlus 1 this floating masterpiece was designed by internationally renowned architect Norman Foster and will be the first of 10 identical superyachts to be built over the next three years at the Rodriquez Cantieri Navali yard at La Spezia, Italy. 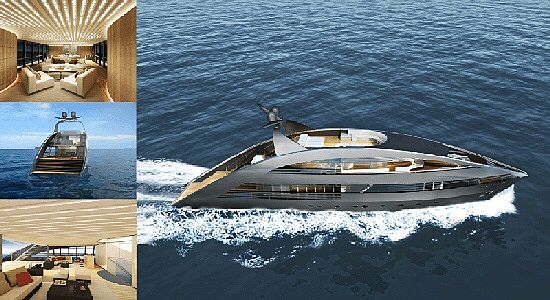 With a strong emphasis on quality and quantity of space this stunning four deck boat has an overall length of 41 meters. Once commissioned, the yachts will have five suites for up to 12 guests at any one time who will be looked after by a permanent crew of seven highly trained and experienced staff. The internal planning of the yachts will offer total flexibility to respond to the most discerning needs of owners and their guests and families with keen attention being paid to design and detail ranging from space and ambience down to crockery, cutlery, fabrics and crew uniforms.

Commenting on his design Foster said, “I am personally hugely excited by the challenges posed by the YachtPlus fleet starting with the design of the 40 “Signature Series.” For me this is an invitation to think afresh the whole concept of a 41 meter luxury superyacht from a broad brush strategy down to the smallest detail both inside and out.”

On his appointment as YachtPlus CEO Sergio Dell’Acqua said, “Fractional ownership is fast becoming acknowledged as the way forward for those wishing to have a personal involvement in top- end luxury products. At YachtPlus we offer the discerning investor the opportunity to part- own a truly spectacular yacht without all the hassles and financial burdens found in sole ownership. It is one of the most exciting concepts to hit the luxury market in recent years and we look forward to an exciting and developing future.”

The concept of fractional ownership is one of the fastest growing options in the market and is rapidly becoming recognized as the most cost effective and enjoyable way of gaining part ownership of ultra- luxury products. One of the main attractions of this type of ownership is that it removes all the problems, worries and concerns associated with sole ownership thereby giving total pleasure, relaxation and privacy to those participating.

In order to join the YachtPlus ownership programme an initial payment of EUR1,850,000 will give a 1/8th shared ownership of the yacht and guarantees 30 full days per year on board – 10 days peak season in the Mediterranean and 10 days peak season in the Caribbean and two five day “cultural cruises.” 1/8th ownership will also give access to the YachtPlus fleet of 10 identical yachts worldwide so the owner can choose when and where they go. The contract period is for eight years after which time the yachts will be sold and the owners will receive full pro-rated proceeds from the sale. All arrangements from bookings to transport, private jet and helicopter transfers and onboard requests will be handled by the YachtPlus Concierge who will take care of every detail and all requirements thereby further enhancing the ultimate experience in hospitality, service and luxury available to the owners.

YachtPlus’s second boat will be launched in early 2009 with two more to follow later in the year. A further six yachts are scheduled to be launched during 2010/2011 to complete the YachtPlus fleet.