The weather provided plenty of variation for the Superyacht Cup fleet for the first race of the three day series in Antigua. Yanneke Too sailed an excellent race making the most of the strong wind conditions, big swells and with conservative preparation for the final squall they crossed the line first, winning the Camper & Nicholsons International Race by 2 minutes and 11 seconds. Second was Patient Falcon, and third Sojana. The first three boats finished within less than 6 minutes. 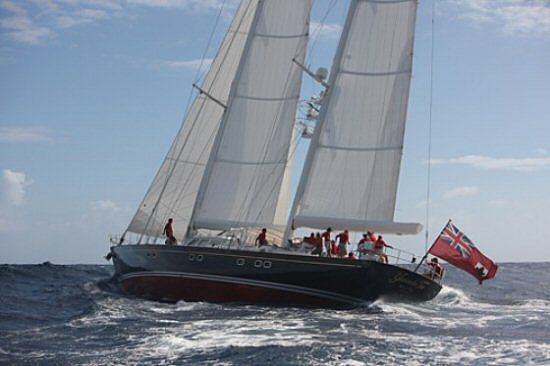 First to set off in the pursuit race was Tenacious, the Ted Hood designed 35m sloop, taking part in her first Superyacht Cup event. With a good strong breeze of 25 - 28 knots Tenacious was eagerly chased by the second and third boats to start, Patient Falcon and Yanneke Too. The 4 - 5m swell from the east! south east certainly provided some exciting sailing and testing conditions but by the end of a tight reach to the first mark Yanneke Too gybed round 'Antigua Rigging' mark to take the lead.

After the gybe the course took the yachts on a slightly broader reach down to Curtain Bluff. Yanneke Too, Timoneer and Sojana all hoisted extra downwind sails which boosted their positions against the smaller sloops. As the fleet headed up the final beat, a huge black cloud darkened the Antiguan skies, and as the heavens opened the wind picked up with gusts of up to 45 knots. "I didn't want to even look at the instruments in that squall but I did briefly glance up to see 45 knots," commented America's Cup sailor Mike Toppa of North Sails Florida, sailing onboard Yanneke Too.

Although several boats suffered minor breakdowns and 'technical hitches' in the rough conditions, all are planning to be ready to head out again for the second race for The Superyacht Cup Antigua 2007 which will start at 12.00 local time, December 14th.