Yarmouth Harbour has announced that superyachts, both sail and power, will be able to dock at the end of their pier, one of the oldest and longest wooden piers in the UK, from January 2012. The pier is currently best known as the visiting stop for the famous paddle steamer; Waverley, and the SS Balmoral. Yarmouth is in a superb position at the Western end of the Solent; its natural deepwater harbour is renowned for its protected entrance, beautiful surroundings, and air of tranquillity. 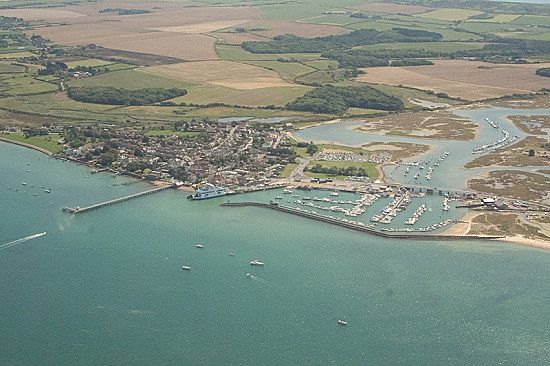 The 190-metre Pier was opened on 19th July 1876 and has suffered collisions, renovations, and gribble damage during its 135-year history.

In 1975, the pier was listed as Grade 2 structure, but by 1980 needed complete restoration in order to remain open. The pier was once more in need of significant maintenance by the summer of 1993 when £600,000 was spent extending the life of the pier by an estimated 40 to 50 years. But the pier needed yet more work in July 2007, when it was confirmed that the piles were being eaten away by gribble and shipworm, luckily a £450,000 grant was obtained from the Heritage Lottery Fund to rescue the pier and it was reopened in April 2008 by Alan Titchmarsh. Because of the Pier’s age and history, and its grade II listing; alternatives to timber piles are not permitted, so the 100 piles are made from Greenheart timber, one of the hardest tropical hardwoods, but the piles are nevertheless eaten away between the high and low water levels, which results in all piles being replaced every 15-20 years.

Yarmouth Harbour has completed more than £1.4 million worth of improvements this year. New walk-ashore pontoons were installed to provide greater accessibility for residents and visitors. A number of the new walk-ashore pontoons offer finger berths and all walk-ashore bookings will be given finger berths, which offer greater convenience and privacy. In building these berths, Yarmouth became the first harbour to make significant use of Kebony, a treated softwood Decking, instead of the less environmentally friendly Balau. The fuel berth has been moved near the harbour entrance and now accommodates four yachts, rather than two. Additional improvements include greater electrical and water capacity and improved Wi-Fi coverage.

The perfect sailing destination for a relaxing get-away; the harbour’s modern facilities provide an ideal base from which to explore this relaxing, historic town, famed for its quaint streets and excellent pubs and restaurants. Yarmouth’s location is also a great base for exploring the island beyond; The Needles Battery, Yarmouth Castle, Tennyson Down, and Alum Bay.