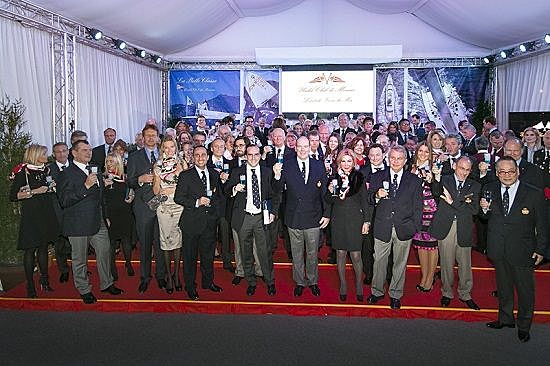 To mark the occasion a delegation from the Visun Royal Yacht Club, led by its president Lawrence Wang, had made the trip from China to discover the Principality and Yachting. Along with Mr Jianqiang Bian, Consul General of the People’s Republic of China, they were welcomed by HE Mrs Catherine Fautrier, Monaco’s Ambassador to China and Peter Liu, the YCM’s first Chinese member and very committed to promoting his club and the Principality in general in Asia.

In his speech, HSH Prince Albert II said: “While the Principality of Monaco may be recognised today as a centre for Yachting, it is our responsibility to encourage and support any initiative in this field. Therefore, in continuity with the actions taken by “La Belle Classe Tradition” and “La Belle Classe Superyachts”, I wanted us to be in a position to issue a “La Belle Classe Destinations” label to encourage development of outstanding marinas throughout the world. It is therefore with great pleasure that we formalise this first agreement with the Visun Royal Yacht Club. Together, we hope to develop exchanges between our two countries and promote in Asia the maritime activities we hold so dear.”

According to its statutes and ambition to provide “a real link between people who love the sea”, the Yacht Club de Monaco created the label “La Belle Classe by the Yacht Club de Monaco”, to support owners around a certain Art de Vivre la Mer and to pass on a priceless maritime and cultural heritage. Launched in 2005 for owners of vintage and classic yachts (“La Belle Classe Tradition”), then in 2008 for those with luxury yachts (“La Belle ClasseSuperyachts”), the YCM unites owners and all those involved in the yachting sector by providing a platform for communication and discussions, for example Monaco Classic Week (11-15 September 2013), and economic (23 January 2013) and environmental (26 March 2013) symposiums, organised every year in the form of dinner-debates.

Keen to support yacht owners at sea and in their choice of ports of call worldwide, the Yacht Club de Monaco has extended its “La Belle Classe” concept to embrace marinas and clubs, by creating a third entity,“La Belle Classe Destinations”. The goal is to create an exclusive network of understanding and collaboration, through a standard of excellence for marinas, with support and monitoring to guarantee the quality of services. Safeguarding maritime heritage, protecting the environment, integrating and being involved in the local community, with the indispensable presence of a Yacht Club,where owners can enjoy the social life, are essential criteria for retaining this label.

By joining “La Belle Classe by the YCM”, a signatory commits to respecting a charter and affirming their desire to promote courtesy and mutual respect; where the word regatta is synonymous with fair-play and spectacle, and etiquette with lifestyle and solidarity; and where technology is at the service of preserving the environment and developing yachting: a way of confirming their desire to build the future! 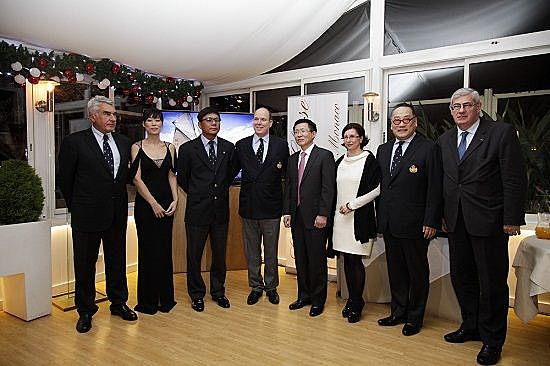 Presided by Lawrence Wang, the Visun Royal Yacht Club in Sanya on the “Chinese Riviera” is the first signatory in Asia to join this exclusive network.

This astute businessman was one of the first to invest in the yachting sector in China, specifically Hainan Island, by building a Yacht Club and marina facilities (216 mooring rings) for boats up to 60m. The site is still being developed, and a basin of 160 moorings including two spaces for mega-yachts up to 100m is under construction, with the total capacity expected to harbour 1,000 boats in three years’ time in Hainan. The Club organises many social events and corporate regattas, and hosts the Hainan Rendez-Vous, the biggest and most exclusive superyacht show in China with many of the big yachting and luxury brands attending. More than 70 nautical companies (shipyards, marinas, retailers and brokers) are already registered for the Hainan Rendez-Vous 2013 (30 March to 2 April 2013).

“The yachting market is expanding fast. The Chinese are not yet a great nation of sailors but attitudes are changing: for many, yachting has become a very important indicator of luxury on a social level. The potential for development is all the more significant give that China has 18,000km of coastline, more than 6,500 islands and four big rivers,” observesBernard d’Alessandri, Secretary General of the YCM.

Some statistics on yachting in China:
- In 2011, statistics show that total sales revenue for imported boats was around $342 million and this market is expected to triple within 5 years (Source: MDC / NDA Consulting, 2012).
- Exports & imports of yachts and pleasure boats have seen double-digit growth since 2004, with a drop in 2009 due to the global economic crisis (Source: Italian Trade Commission – April 2011)
- The value of imports grew by 134% to US$ 91M (US$ 39M in 2009), reaching an historic high.
- There are nearly 300 boatyards making pleasure craft in China (IAG Yachts, Kingship…)
concentrated on the Chinese coast, of which 88 are building yachts.
- Around 100 foreign yacht brands (Azimut, Sunseeker, Benetti Yachts, Princess Yachts, BénéteauJeanneau…) are marketed through 80 distributors.

While the YCM Youth Awards, which encourage the Club’s talented youngsters, saw tributes paid to Alexander Ilsley in the Optimist category and Nicolas Bouchet in the Laser, the YCM Awards 2012 all recognises the member who has best defended the Club’s burgee during the past year.

The Trophée Credit Suisse 2012 was won by Igor Simcic on Esimit Europa II for the numerous records he set in 2012, in particular the Giraglia in 14 hours 56 minutes 16 seconds, the Wally Record in 10 hours 13 minutes 42 seconds and the Trieste Valletta in 68 hours 42 minutes and 24 seconds.

HSH Prince Albert II also paid tribute to the “domination of Vincenzo and Achille Onorato with their Macalzone Latino on the Melges 32 and Melges 20 circuit, the victory of Andres Soriano in the Copa del Rey and in Soto 40 in Valencia, the strong showing of our members on the AC45 circuit and in the next 34 th America’s Cup (on challengers Luna Rossa, Artemis and Team New-Zealand).”

Up there with the rest was Ian Ilsley, Monaco’s one-design specialist who won both the International Smeralda 888 Championship and the J/24 Monegasque Championship.