Andrea Merloni is the Italian owner of K42, the custom explorer in build at Cantiere delle Marche in Ancona. Formerly chairman of Indesit, the domestic appliance giant founded by his late father, he decided to invest a portion of his inheritance in a yacht tailored to his very specific lifestyle. SuperYacht Times recently caught up with the 51-year-old owner in Milan. 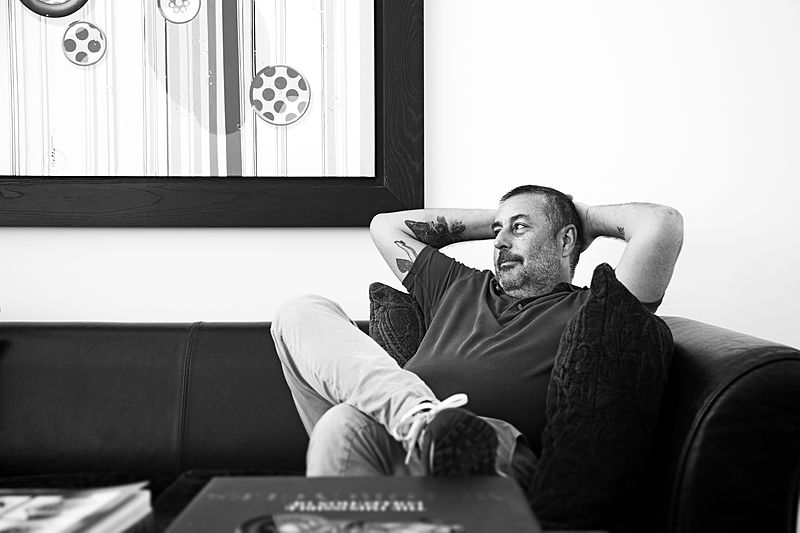 Photo: Justin Ratcliffe / SuperYacht TimesBy any measure, Andrea Merloni is not your typical superyacht owner. For a start, he actually lives aboard his current yacht, a 29-metre trawler built in Brazil by Inace, which he keeps in Ibiza. He bought the used vessel in 2009 and renamed her A.B. Normal, after the hilarious scene in the cult movie Young Frankenstein when Gene Wilder in the title role discovers that the brain for his monster is from someone called Abby Normal, AKA ‘Abnormal’. For the last few years the yacht has been his floating home, and its shortcomings provided the motivation for building a new one from scratch. The result is K42, the 42-metre explorer approaching completion at Cantiere delle Marche. 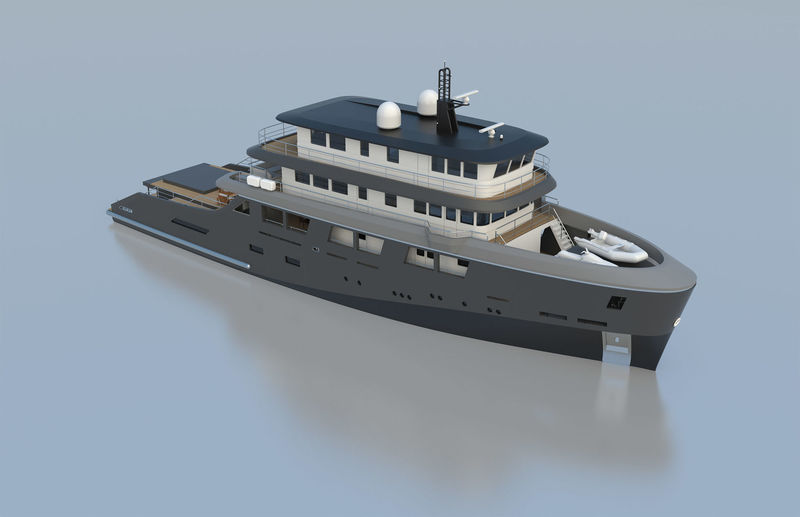 “Most yachts are designed for people who might spend two or three weeks on board each year,” he says. “But because I live on my boat, my situation is very different. Between friends and crew, I’m never alone on A.B. Normal. The only privacy I have is in my cabin on the lower deck, which has portholes that can’t be opened and if I want to smoke I have to do it in the bathroom! So I needed a different boat with a different layout that separated the guest areas from my own accommodation.”

Merloni connected with Andrea Pezzini, an experienced yachting consultant and founder of Floating Life. Together they approached a well-known builder of series yachts, but drew a blank when the Italian brand baulked at the list of modifications required. At this point, Pezzini suggested using the technical platform he had developed with Studio Sculli for a 40-metre explorer in build at Cerri Cantieri Navali, as the starting point for a custom new-build. 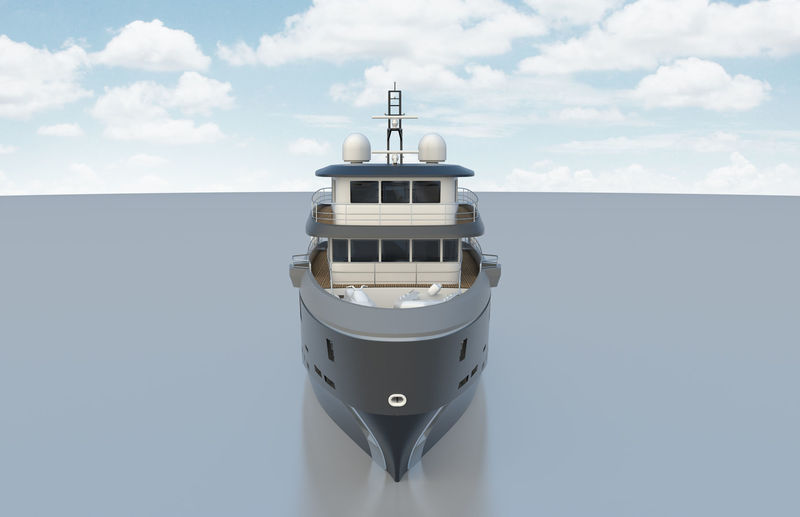 “I had two conditions,” says the owner, spreading the plans of K42 out on the dining table next to a scale model of the yacht. “Firstly, I wanted a real explorer, not a floating palace full of marble and gold taps. And secondly, I wanted the whole top deck, the only place you can have complete privacy, for my own use.”

These two requirements determined the rest of the unusual layout, whereby Merloni set out to limit the circulation flow between the social and private spaces by confining the guest areas to the main and lower deck in carefully planned and self-contained zones.

“This is my home and you don’t want people wandering all over your house,” he explains. “So there are two guest cabins on the lower with fold-down terraces, and two on the main deck with doors that open onto the side companionways.”

Eschewing the idea of a beach club (“we have plenty of those in Ibiza...”), he designated the lower deck aft of the guest cabins for a multi-purpose room that serves as a gym and party space with its own sound system and DJ station. Where the salon and formal dining room would usually be on the main deck, there is a semi-enclosed space for informal dining with a drinks and teppanyaki bar. Behind the wheelhouse and captain’s cabin on the upper deck is a media room with a comfy chaise longue for lounging in front of the wide-screen TV, which the owner can use alone or in company.

In line with its explorer vocation, Merloni also stipulated generous storage and technical areas. The pro-spec galley is a case in point. Fitted out with commercial equipment by Marrone, which supplies some Michelin-starred restaurants, the galley is immense for the size of the yacht and two chefs can prepare food for up to 250 guests at a time. The under-lower deck houses ample cold and dry storage, as well as a dedicated laundry, refrigerated garbage room and a temperature-controlled wine cellar. 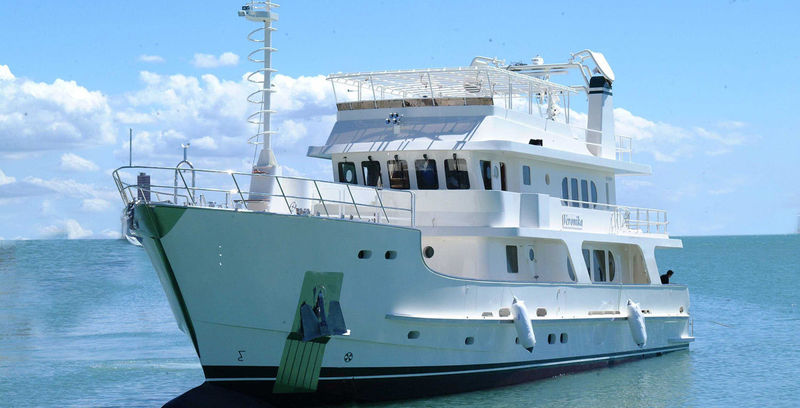 Photo: Inace“There’s no point building a boat that can go round the world, and then living off tinned tuna,” Merloni jokes. “On A.B. Normal I have just one fridge-freezer, which is next to useless with a lot of guests on board because you have to resupply every day. Another priority was comfortable quarters for my crew. As a live-aboard owner, I spend more time with them than with my guests and, believe me, if they’re not happy neither am I.”

Then there are the toys. On her foredeck, K42 will carry a Land Rover Defender customised by UK-based Tweaked Automotive, a BMW GS 1200 motorbike, a Jet Ski and the crew tender. Merloni originally planned to have a 10-metre, 40-knot chase boat supplied by Icelandic specialists Rafner Leiftur on the main aft deck, but when the yard had difficulty delivering on schedule he decided to build his own. Both the heavy 4x4 vehicle and tender require high-capacity cranes, which were custom built and painted bright red.

“A proper tender was absolutely essential,” says the owner. “On A. B. Normal we tow the chase boat when it’s not being used, which can mean delaying our departure in rough seas. I wanted the space to be able to carry the tender on deck during long transits, whatever the weather.” 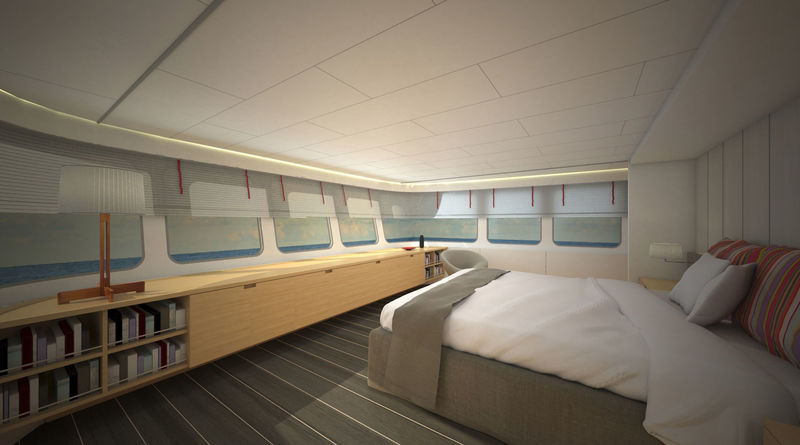 When it came to choosing the yard to build K42, Merloni considered various options. Cantiere delle Marche emerged as the natural choice for several reasons, not least because the yard had a solid track record of building its Darwin series of sturdy passagemakers. The owner also grew up near Ancona and knew Gabriele Virgili, the shipyard’s chairman and fellow motorbike enthusiast (Merloni used to race professionally and later owned the Benelli motorbike brand). K42 was instrumental in the yard’s decision to set up its one-off division and a new construction shed was built to house the project.

On boarding the unfinished yacht in the shipyard, the impression is of being on a much larger vessel. The exterior profile is deliberately utilitarian and not particularly pretty by superyacht standards. Keeping the five-decker below the 500GT threshold also required shaving a few millimetres off ceiling heights, widening the side decks and introducing semi-enclosed spaces that are compensated for in the gross tonnage calculation. 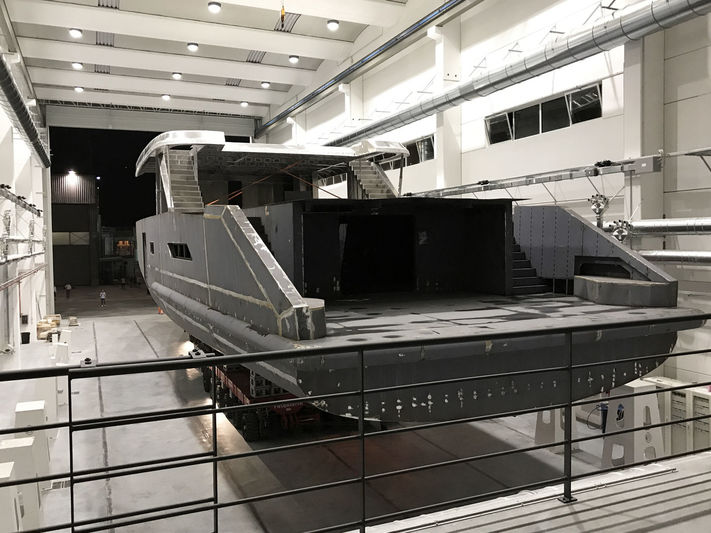 “She’s a spartan boat in many ways, but that’s exactly what the owner wanted,” says Ennio Cecchini, CEO of Cantiere delle Marche. “At first he didn’t want any fairing at all, but we convinced him to have a light fairing as opposed to a full superyacht paint finish. There aren’t even any sliding glass doors on board. She is what she seems: a seaworthy explorer designed to be lived on with styling, engineering and a layout to match.”

By the time Merloni takes delivery of K42 at the beginning of next year, it will be too late in the season to make the crossing to the Caribbean. Instead, he may head for the Red Sea (“the hottest place I think of at that time of year”) before returning to the shipyard for warranty work in the spring and a proper inauguration celebration in Ibiza. 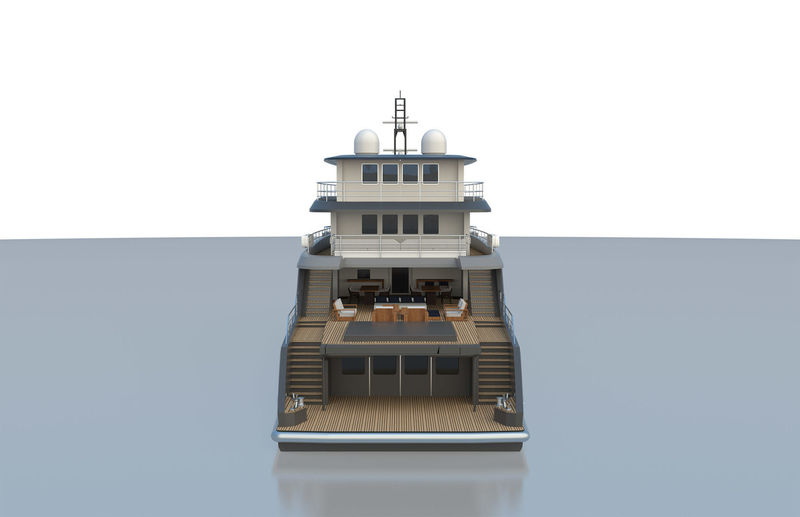 “I’m single with no children, I have time on my hands, and I’m fortunate enough to have some money in the bank,” says the owner. “I want to make the most of life and K42 is my way of doing that.”