The new Princess 40M Imperial Princess is nearing completion and briefly took to the water for the first time last week for initial tests. This new superyacht quietly slipped into the water from the historic ‘number 1 slipway’ at South Yard and made a short trip into Plymouth Sound to conduct initial engine and systems tests. 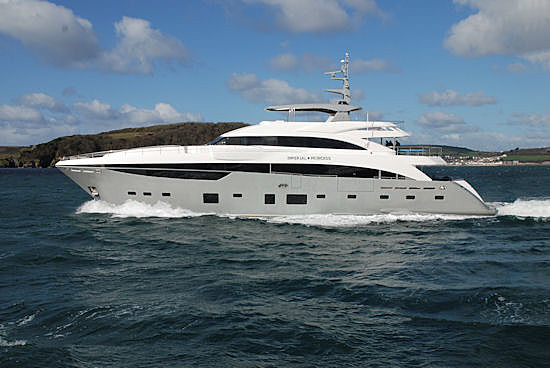 The whole event took place without drama or fanfare but the moment was still monumentous all-the-same. Managing Director Chris Gates was on board to oversee the trip. “It was quite something and a demonstration as to just how much we have achieved with this incredible craft. She is truly wonderful and performed impeccably, we couldn’t be happier with her performance at sea.”

The new 40M was not in a completed state for this inaugural run with protective coverings fixed to the hull and numerous parts still to be fitted yet she still proved to be very much the head-turner in the rare March sun. Gates continued “We have of course studied all the drawings and the CGIs and watched her take shape inside the shop but it is not until you see her on the water for the first time you realise just how beautiful she is. Even incomplete as she is at the moment she looks magnificent so she’ll certainly be stunning when she officially launches for the first time next month.” 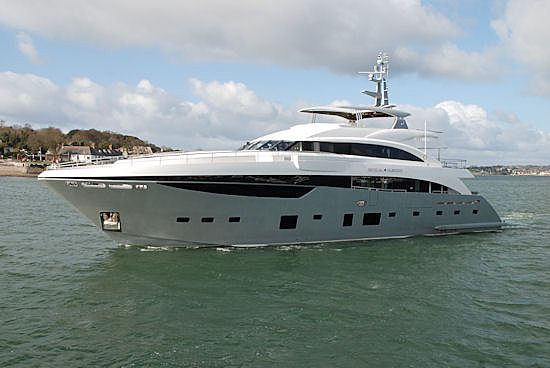 The Princess 40M is the first tri-deck yacht built by the company and she comfortably accommodates up to 12 guests in exceptional luxury and up to 8 crew in separate quarters. The first yacht, Imperial Princess, has now returned to the production shop and it’s full steam ahead for the team as she moves into the final completion stage.

Work has now also begun on developing the recently acquired South Yard site into a world-class superyacht production facility in a £35m investment by Princess Yachts.