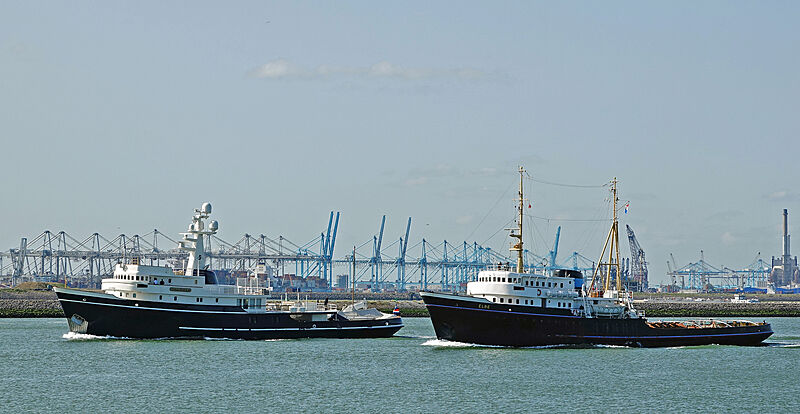 Photo: Kees TornPhotographer Kees Torn captured a special moment this week when the two sister ships and former ocean tug boats Seawolf and Elbe arrived at the Hoek of Holland earlier this week. The two ships share an interesting past, both built at the J & K Smith shipyard in the Netherlands as Clyde and Elbe in 1957 and 1959 respectively.

Operating today as a luxury charter yacht with Fraser, the 58.8-metre Seawolf underwent an extensive four-year-long refit from 1998 to 2002 in which she was first converted from an ocean-going tug into the luxury yacht we see her as today. Seawolf accommodates up to 12 guests over six staterooms, including one luxurious master suite, one VIP suite, two double and two twin cabins. Powered by two Smit Man RB666 1,500 hp engines, she has a top speed of 15 knots, a cruising speed of 12 knots, and an impressive range of 18,000 nm.

Her sistership, Elbe, is perhaps not as glamorous but shares the same active background in deep-sea salvage operations. The two ships were once part of the Smit seagoing fleet and carried out several towing and salvage missions around the world. Elbe’s time with the company came to an end in 1976 when she was acquired by the Association of Maryland Pilots of Baltimore and renamed Maryland. Nearly a decade later, the ship was sold to Greenpeace as the organisation's new flagship, Greenpeace, under which she circumnavigated the world several times until 2002. In the following years, work began to restore the Elbe as a working museum by the Foundation Maritime Collection Rijnmond in the Netherlands and was returned to sea in 2012.