The Italian shipyard CdM has sold the 42.9-metre yacht Deep Blue 43 after a repeat client and experienced owner signed the contract for the new-build during December 2018. As details of the new project have been finalised recently, Deep Blue 43 is already under construction with delivery scheduled in 2021.

Photo: CDMThe new superyacht is intended for family use by an owner who has previously owned yachts from shipyards such as Feadship and Lürssen and owns a Darwin 102. Deep Blue 43 is a custom explorer yacht featuring an exterior design by Horacio Bozzo Design and naval architecture by Sergio Cutolo/Hydro Tec.

“The aim of our design work is the pleasure of seeing the owner’s desires taking shape and recognizing himself in it,” says Horacio Bozzo.

“Designing an explorer for a super-experienced owner who grew up around boats and understands yachting perfectly, is very gratifying,” Horacio adds. “We started from a white piece of paper and brainstormed a lot with him to fulfil the needs of the whole family.”

Up to 12 guests are spread over three decks and accommodated for in six staterooms either on the lower deck or main deck. The interiors, the designer of which is still disclosed, feature a main-deck saloon, upper-deck panoramic sky lounge, sun deck and cockpit area where guests can enjoy the large swimming pool. At the request of the owner, Deep Blue 43 features large and comfortable crew quarters to accommodate crew for cruising long term. Her hull geometry, large fuel tanks and economical consumption will provide Deep Blue 43 with an impressive range. 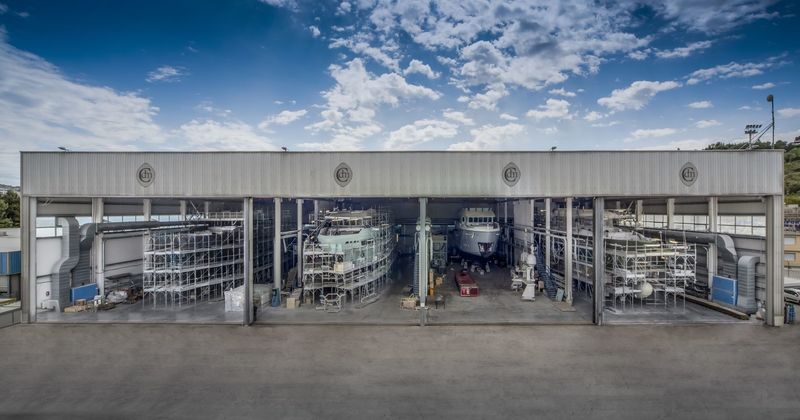 Photo: Cantiere delle Marche“I am delighted with this milestone sale,” Vasco Buonpensiere, CdM’s co-founder and Sales and Marketing Director, says. “The trust this owner confirmed in CdM gives us the highest reason of pride. It is a statement of appreciation for both our yachts and ourselves as a team always committed to the owner’s satisfaction.”

“The work on technical specifications has been extremely detailed and lasted almost 12 months to achieve a double result: to build a 43-metre yacht with the most detailed and comprehensive specs we have ever drawn up and to proceed with no need of modifications as construction progresses - unless unforeseen owner's needs should arise as the construction goes along,” added Vasco Buonpensiere.

“In the light of this approach and procedures, within the team, we joke around saying that we are  about to build the smallest 80-metre yacht ever built!”

“CdM’s strategy to dedicate one slot per year to fully custom projects has proved to be successful and extremely important for the technical growth of the shipyard. Building these one-off vessels is a great opportunity for our team to learn something new and to work out of its comfort zone: this is the only key to move forward and improve, in our opinion, and that’s why we opted for this strategy” Buonpensiere says.

“Being chosen by experienced owners such as this gentleman who decided to have his second yacht built by us, after having owned yachts built by the most reputed Northern European brands, is the best possible proof that our commitment, dedication, technical skills and quality are second to none,” he added.