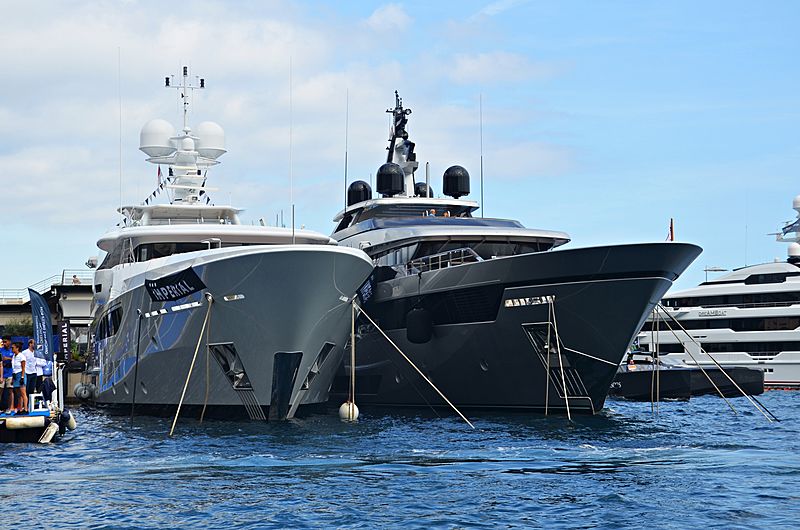 Photo: Aurélien Herman / SuperYacht TimesAmels’ 52.3-metre superyacht Grace and Riva’s 50-metre Race have been photographed together in Monaco. The yachts were built 10 years apart, with the former delivered to her owner in 2009 and the latter in 2019.

The Amels yacht Grace is the fifth hull of the Limited Editions 171 model and sports in-house naval architecture, interior design by the Venice-based Nuvolari Lenard and an exterior design by celebrated British designer Tim Heywood. Grace has expansive outdoor spaces including a large swim platform and two lounge areas on the main deck, with a Jacuzzi found on the panoramic sundeck. Her interior designers opted for a highly-personalised interior characterised by rich dark colours, leather and wenge wood. Grace can welcome up to 12 guests in six staterooms, along with 12 crew.

Riva’s Race, which also has in-house naval architecture, was designed inside and out by the Bergamo-based Officina Italiana Design and can sleep up to 12 guests in six staterooms, as well as a crew of nine. Race was one of 18 new-builds nominated for the 2019 MYS Superyacht Awards ceremony. She was the largest yacht built by the Italian shipyard at the time of her launch and remains so to this day.

Heywood, Amels and Imperial on the 52m superyacht Grace