Completed earlier this year by Benetti, the 107.6-metre Luminosity was made possible after a team of expert creatives were given the opportunity to let their imagination run wild. With the exterior designer team made up of Reymond Langton, Hugo van Wieringen of Azure Yacht Design & Naval Architecture, Zaniz Interiors Ltd. and Giorgio M. Cassetta, it was Zaniz Jakubowski who was responsible for the entirety of the intensely detailed interiors. With the superyacht now for sale, the American-British designer has been able to share more details about her work on board. Here, she reveals some of her favourite aspects of the new floating palace. 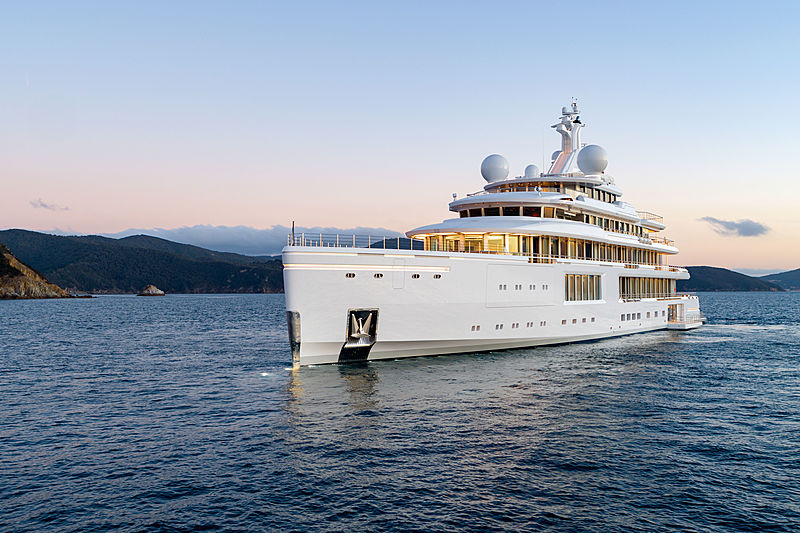 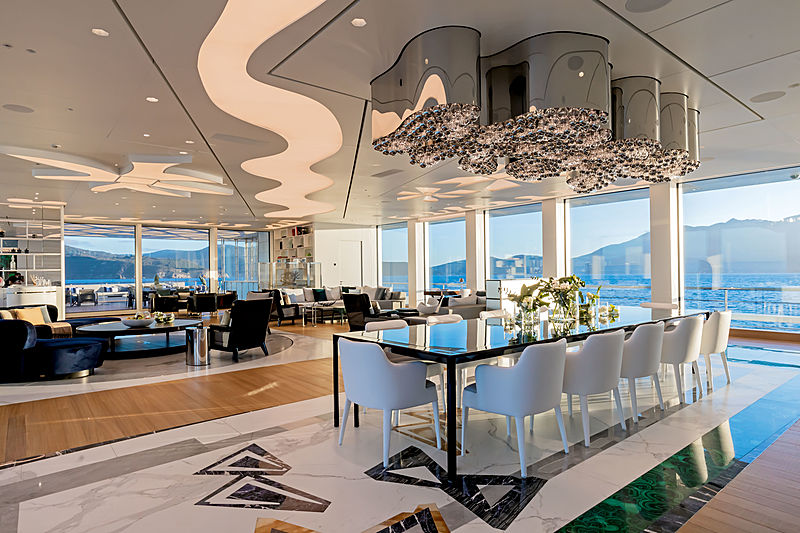 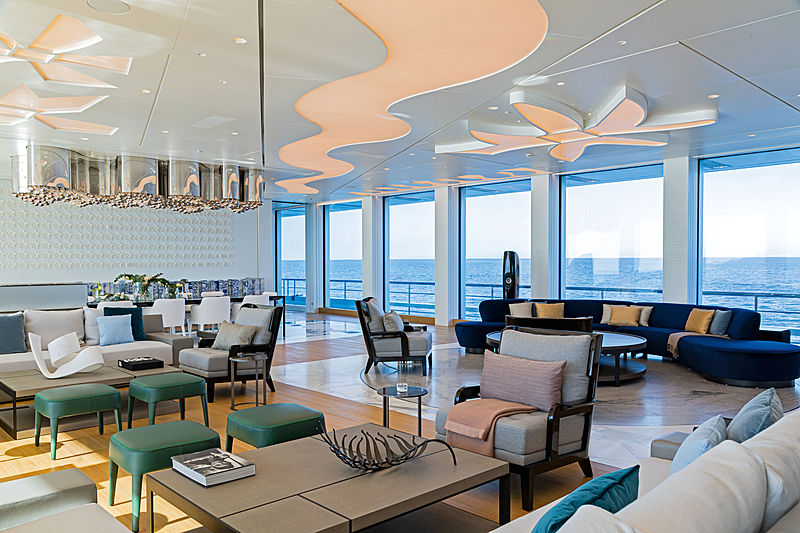 With extraordinarily high windows wrapping the main decks, glass is certainly a defining feature of the design, and a large contributor to the yacht’s massive 5,844 GT. As Zaniz explains, over 800-square-meters of glass panels were acquired to satisfy the owner’s detailed brief: “The owner wanted the yacht to be future-proof, which meant that so many aspects, including the technicalities for a hybrid engine, were instilled by the owner in the original notes before we went anywhere near a shipyard. It was all his idea to have unusually high ceilings and larger spaces. 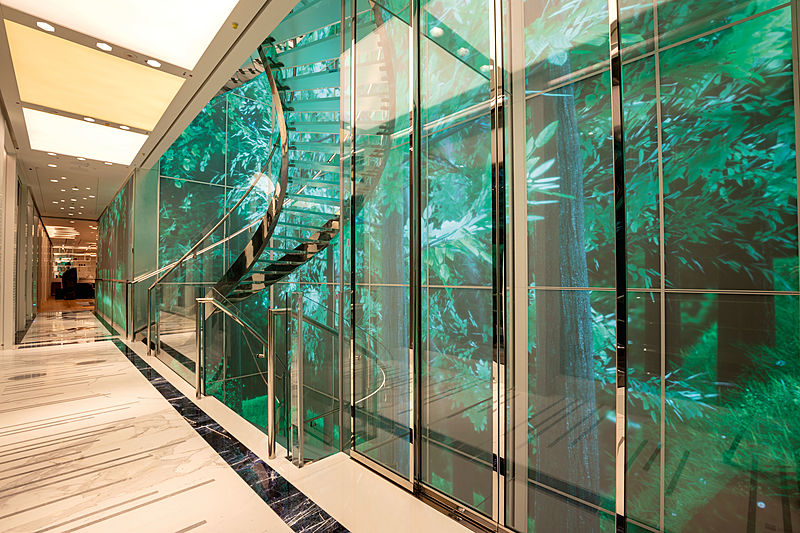 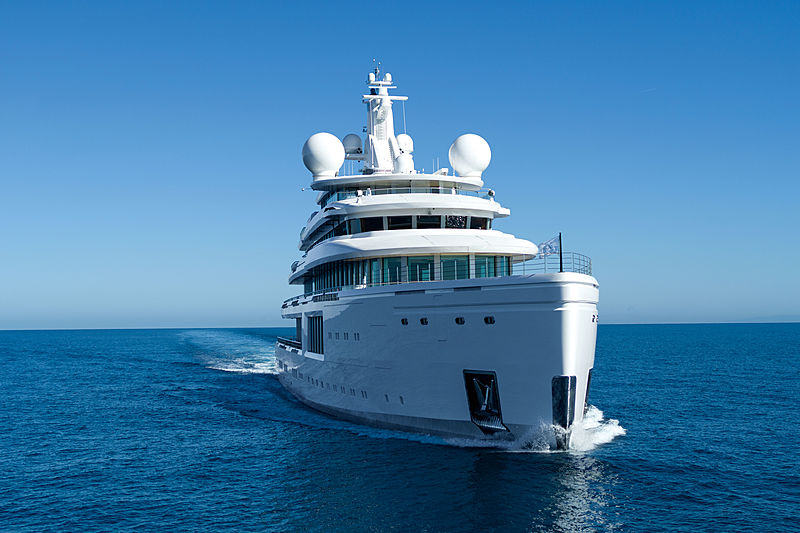 Photo: Benetti SpA“I think having worked with such an experienced and knowledgeable client was amazing because it challenged me,” she adds. With a vast amount of space to play with, Zaniz soon created the imaginative 18-metre high video wall that welcomes guests as they board on the main deck and which stretches down around the main stairwell through all six decks. “I wanted to ensure that from whichever area you entered, there was a feeling of light. And so that's why the ceiling has a video feed of the sky around you in the lower deck lobby,” she describes. 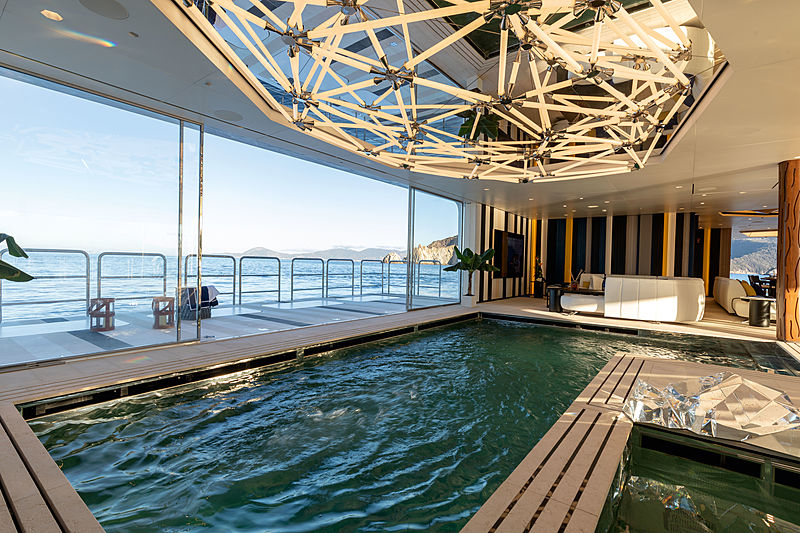 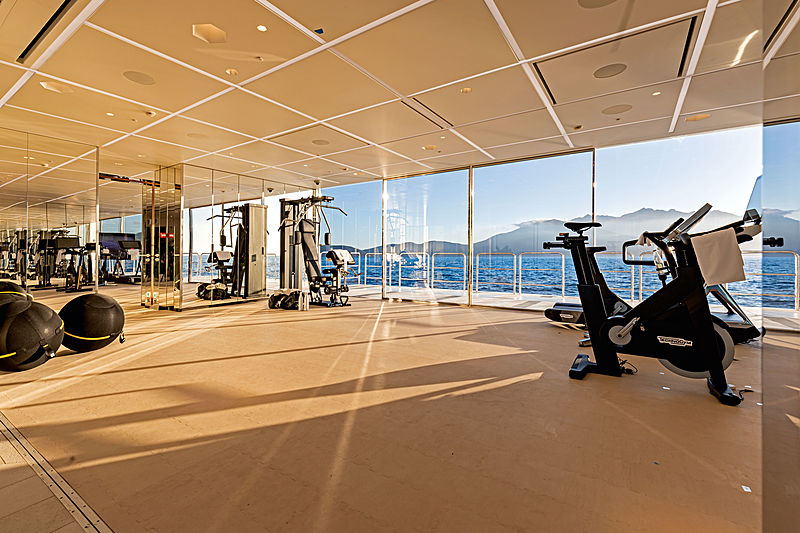 “Indoors, everything has a connection to the sea. Notable features such as the frameless glass doors in the gym exist so guests can exercise with the sea breeze if they prefer it over air-conditioning,” Zaniz explains. 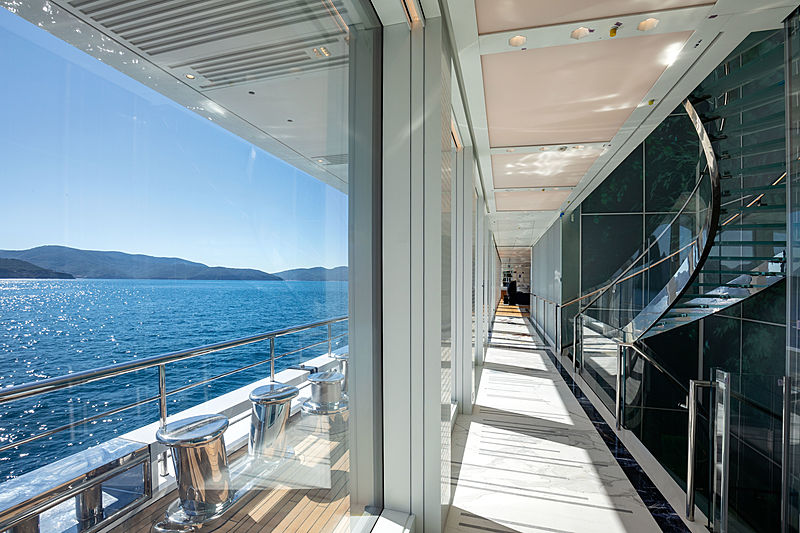 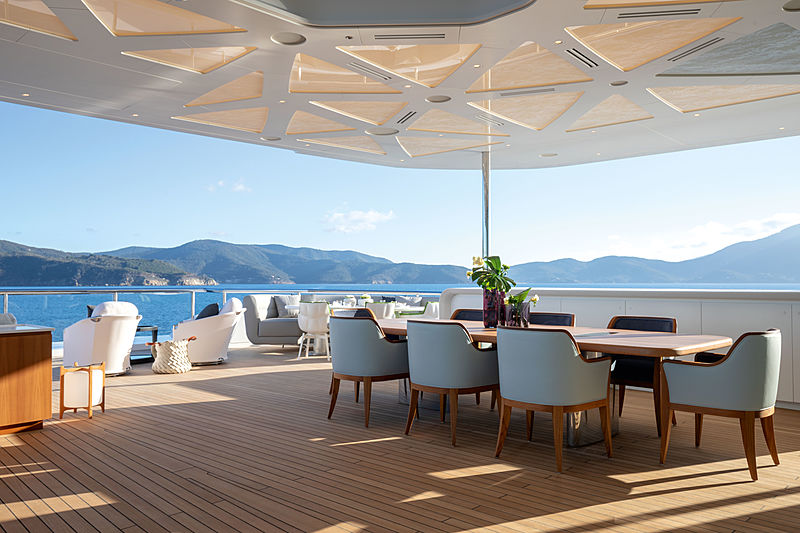 Photo: Benetti SpAAnother demanding area was the beach club: “It is quite a special space because the beach club had to have so many functions. There are things that nobody would really notice, such as the theatre wall and the swimming pool at the apex. That was my homage to the painter René Magritte and his surrealism, hence why I had curtains sculpted out of limestone next to the television. There's a reason for every element and I think we succeeded very well.” 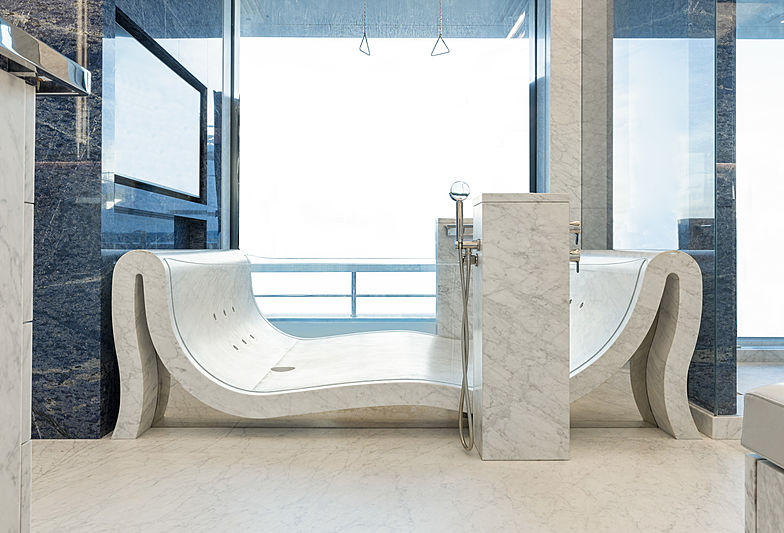 Luminosity is made up of thousands of tiny design details, each and every one meticulously planned by Zaniz and her team to create a magical interior: “The birds seen on the walls floors of the main-deck hallway alongside the video wall have eyes made from five millimetres of black marble with a white ring around it. They are joined by fish and bees, which are represented by the hexagonal shapes you see on the floor and the ceiling in the high-traffic areas. You can follow the bee from the video forest to where it made its way into the hallway, the ceiling and onto the floor. It was so much fun to create and there's always a practical reason for the design.” 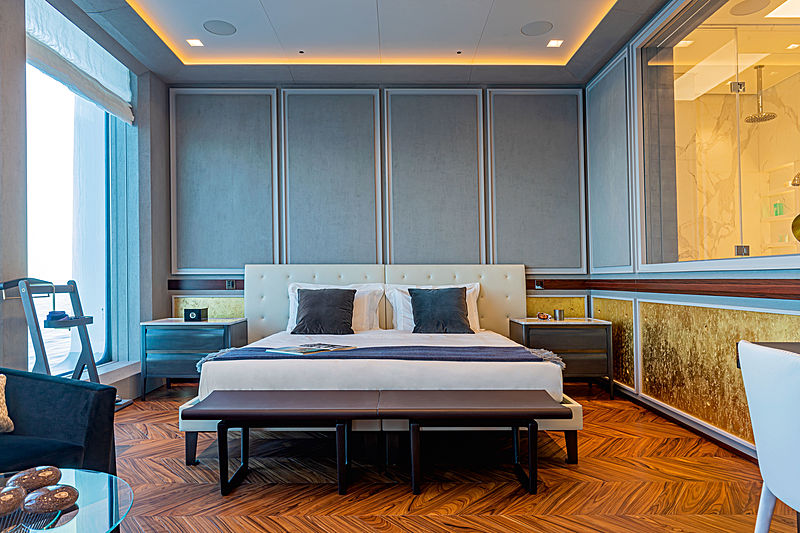 Upon review of the owner’s brief, there were to be no carpets onboard. The solution? Zaniz created shapes from marble to appear as rugs throughout the main living areas. “In the main saloon the dining table is set on some of these marble carpets - which I have made to appear layered as if the rugs are on top of one another.” 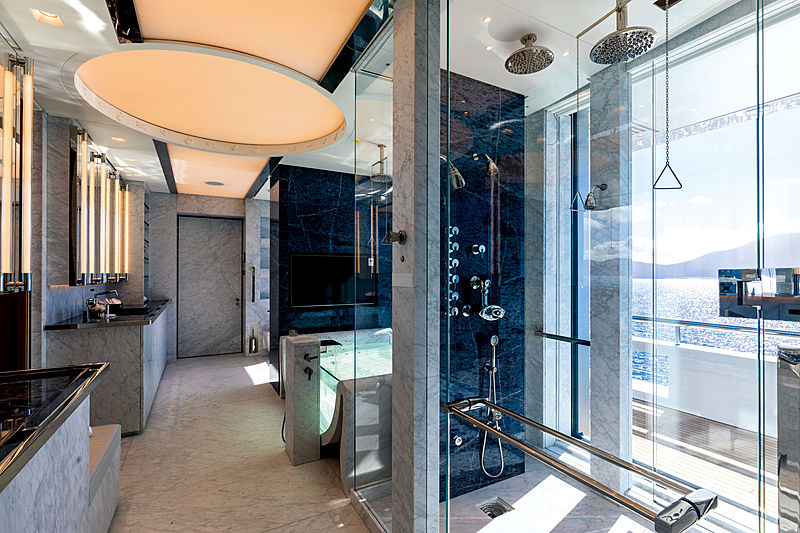 Photo: Benetti SpAThe extent of the detail even goes onto the selection of materials used. With an exquisite gold sink, one of the guest bathrooms includes “a subtle combination of beautiful materials. Rosewood, leather, statuario marble, basalto marble, crocodile marble, concrete, mirror, carbon fibre and gold.” The bathrooms maintain the theme for the staterooms themselves, which are completed by gold leaf riffs with brushed cement, white onyx and ceramic specially carved by water jets. 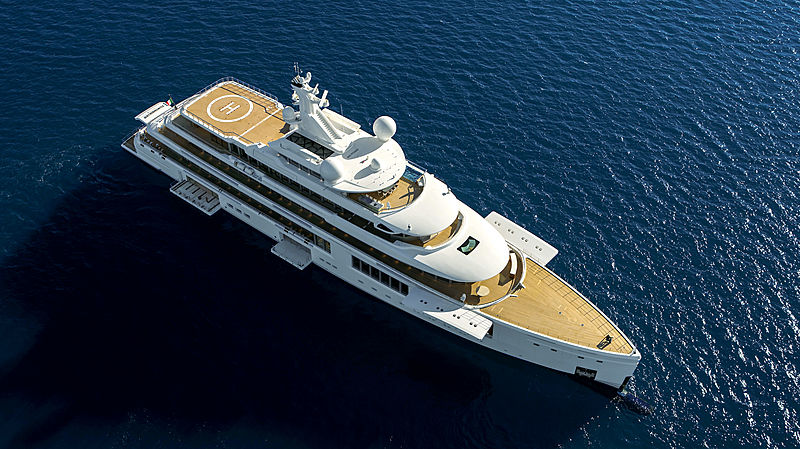 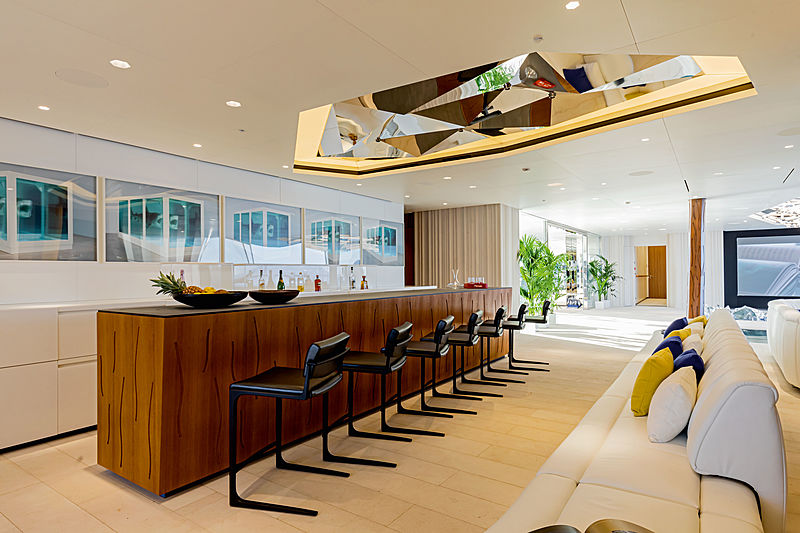 Photo: Benetti SpATo find out more about yacht Luminosity for sale, view her sale listings here, or make an enquiry via Burgess or Fraser.