Following the launch in March of motor yacht Dragon, the 80-metre Columbus Classic, Palumbo Superyachts has released the first interior and running images of its largest yacht to date. 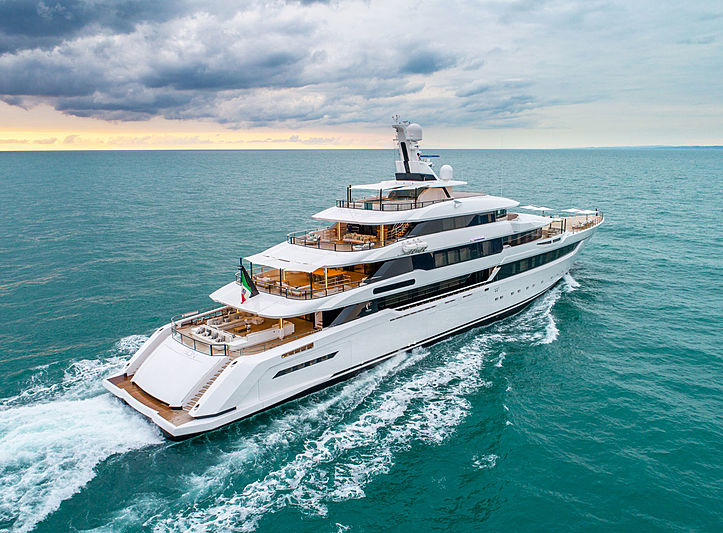 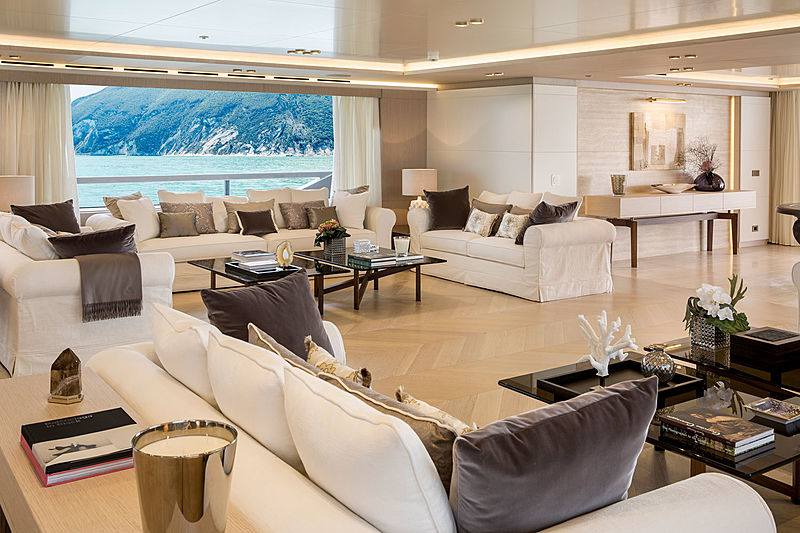 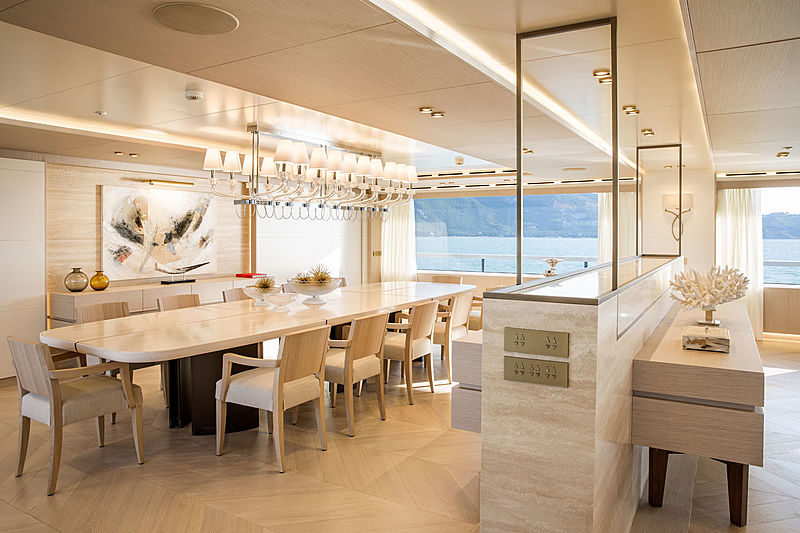 Photo: Palumbo SuperyachtsIn fact, the main salon and dining room features six panoramic glass windows. The largest of these 40mm-thick panes cover an area of 10 sqm each and weigh close to two tonnes, yet are supported solely by the beams and stiffeners of the superstructure without additional columns or pillars.

“With yachts of this size and volume, you’re basically building a ship," says Gianpaolo Lapenna, Palumbo’s project & product manager. “The contractual schedule was tight, which is where we could draw our 50-plus years of  experience in the commercial sector to reduce the build time.” 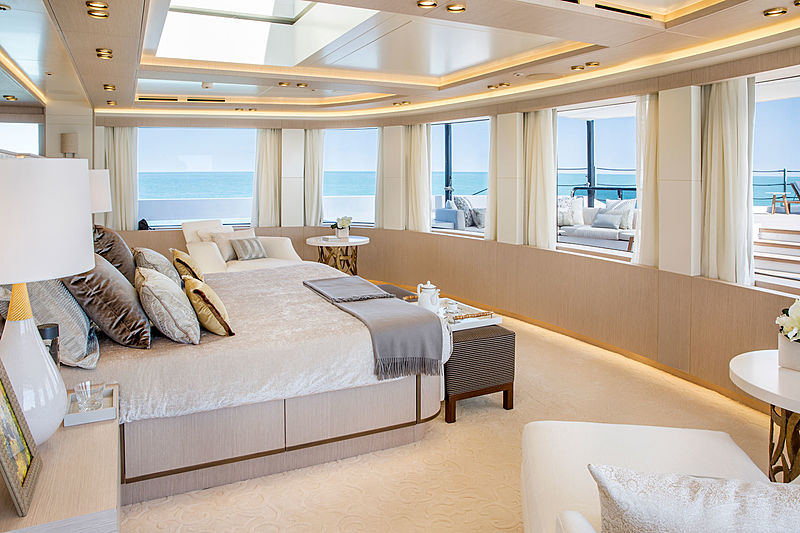 Photo: Palumbo SuperyachtsDragon was started on spec at Palumbo Superyachts Naples and the first two blocks had been built by the time a client came forward in 2016. In the meantime, Palumbo had acquired the ISA shipyard in Ancona and the hull was barged from Naples to the Adriatic in July 2017 for finishing. Incredibly, the 2,300GT yacht was launched 20 months later.

Time-saving methods employed in commercial shipbuilding include the modular crew quarters, which were prefabricated and fitted before the hull left Naples. They include ‘plug-and-play’ bathrooms that could be rapidly hooked up to the piping and electrical systems when the steel hull was united with its aluminium superstructure. “The savings in time and money could then be dedicated to the guest areas,” says Lapenna. 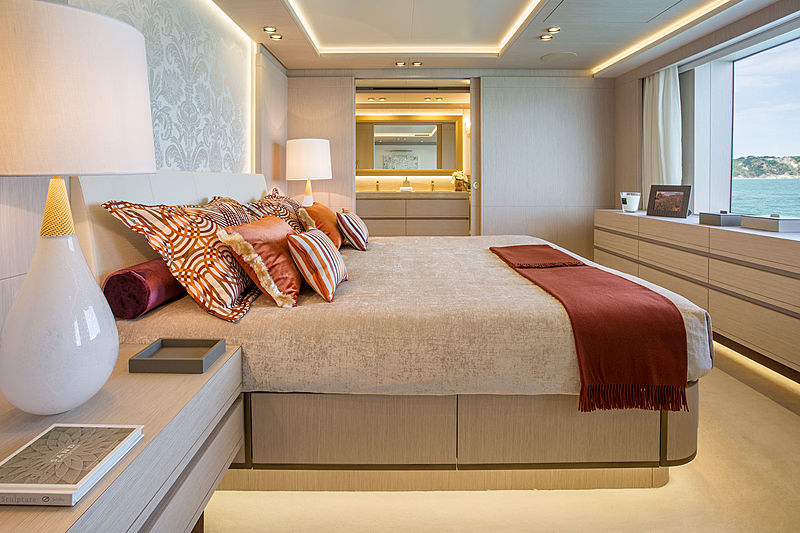 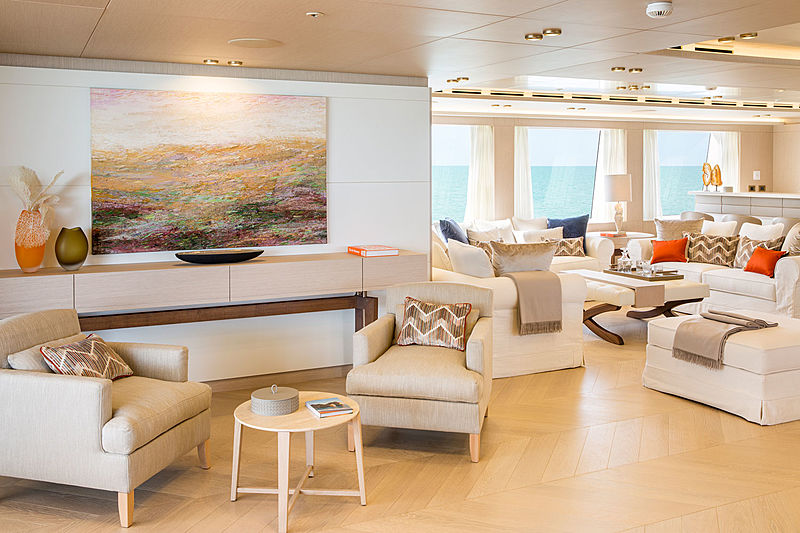 Photo: Palumbo SuperyachtsThe two-tier engine room is also ship-like with a practical layout that includes a dedicated pump room, so that high-maintenance hotel equipment like boilers and water makers are kept separate from the propulsion machinery. The tank deck continues forward of the pump room with a laundry, extra cold and dry storage, and even a gym and media room for the crew.

The exterior highlight is undoubtedly the sundeck with its 7-metre, mosaic-lined pool and Jacuzzi. Cascading between the pool and the shaded hot tub is a waterfall feature from the overhanging mast roof. The sun deck is also served by the guest elevator. 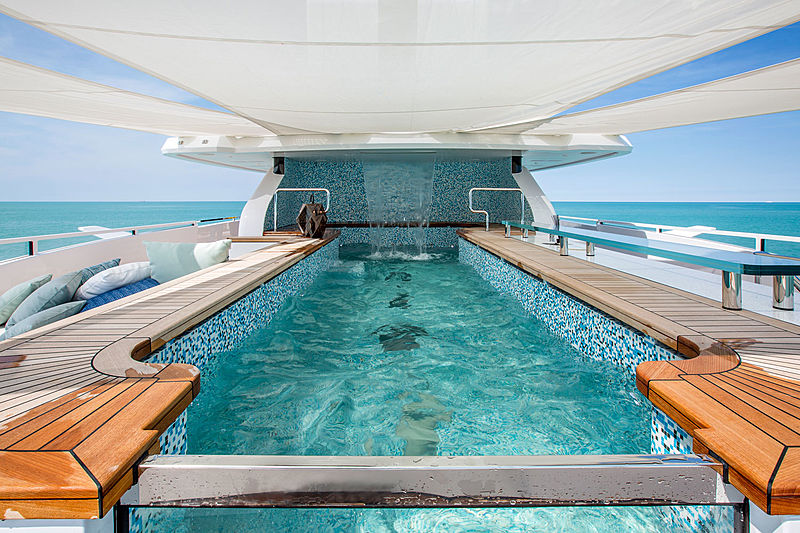 Photo: Palumbo SuperyachtsThe interior styling by Francesco Guida (who also designed the EXTRA range of semi-displacement yachts by Palumbo) is based on brushed oak joinery combined with soft bronze or gold accents and creamy travertine marble. The result is sober and sophisticated, but also welcoming and easy on the eye. More flamboyant are two backlit walls of brilliant blue agate in the beach club. 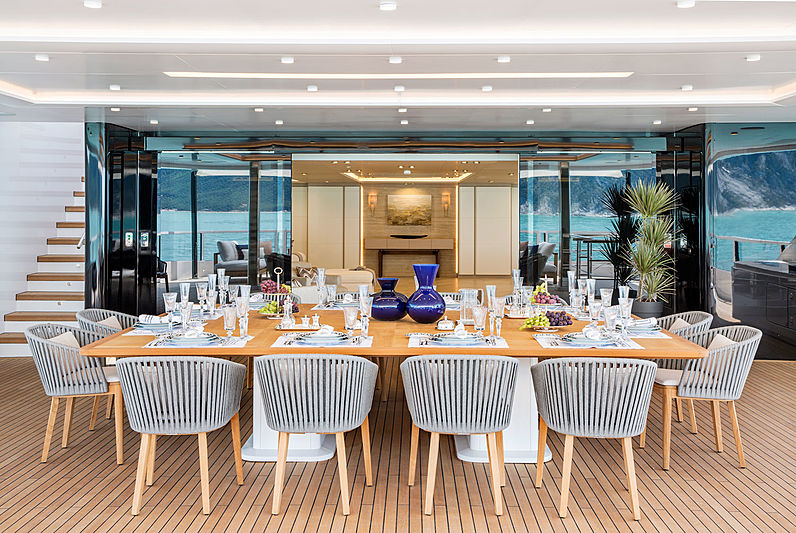 Photo: Palumbo SuperyachtsOwner-supplied items such as the occasional piece of vintage furniture and fine Persian rugs, add a personal touch. Custom-made furniture and fittings include the oak and travertine dining table by Giorgetti in the main salon and the Barrovier & Toso chandelier that hangs above it. 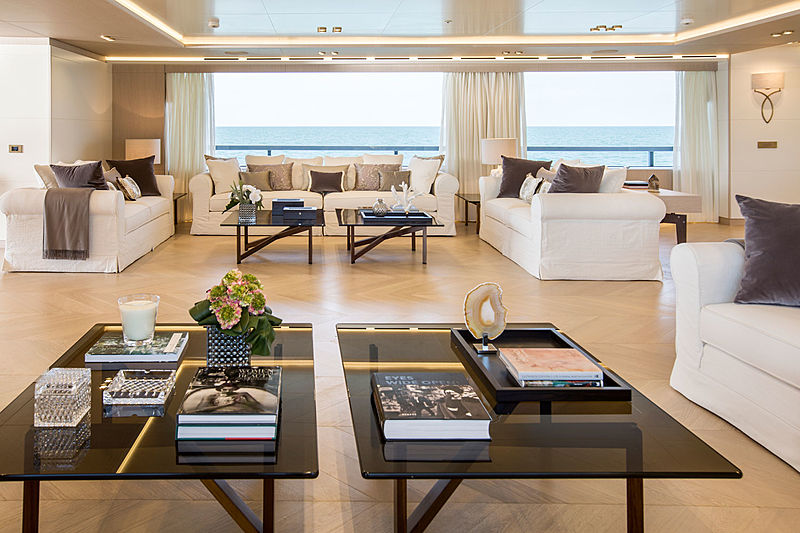 Photo: Palumbo SuperyachtsDragon has accommodation for 12 guests in 4 cabins and a full-beam VIP suite on the main deck, plus the owner’s stateroom on the upper deck (with private sauna). There is an extra guest or staff cabin on the lower deck. 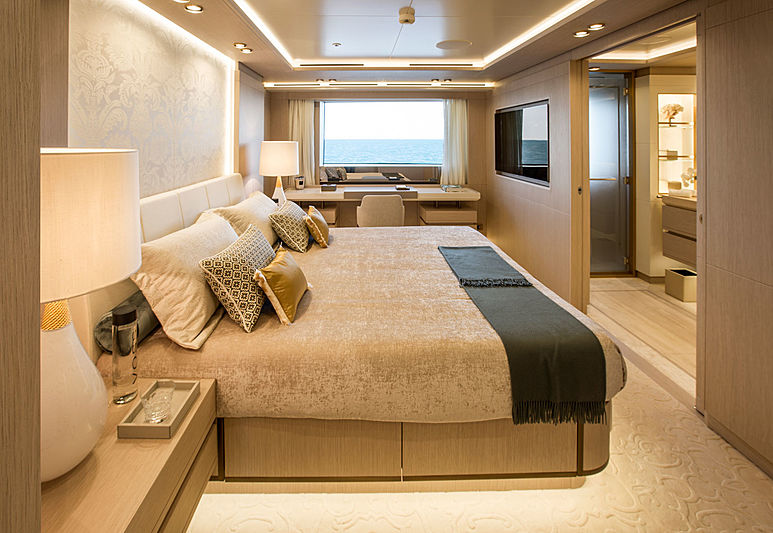 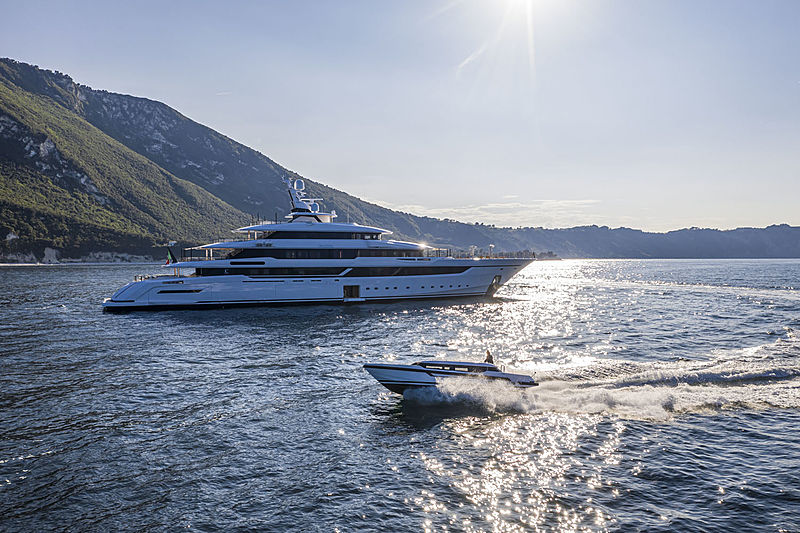 Photo: Palumbo SuperyachtsTwo guest tenders (including a 9.5-metre custom limo tender built by Palumbo) are housed in a garage amidships on the starboard side. The crew tender and water toys are stored in side-opening compartments on the forward main deck. 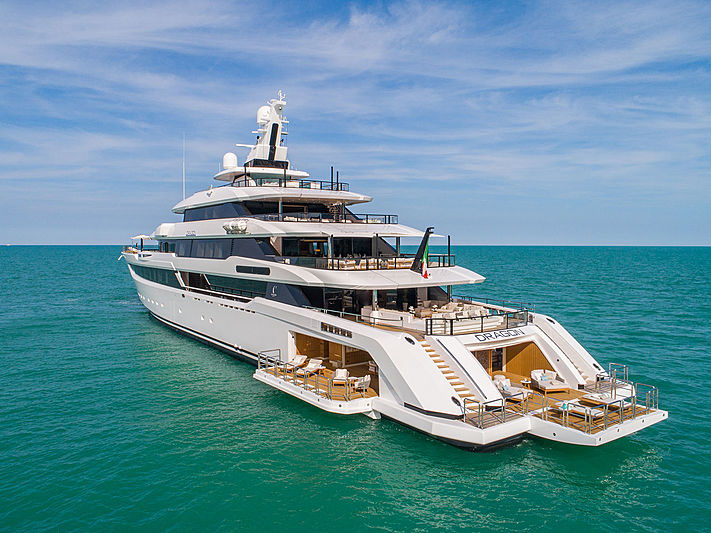 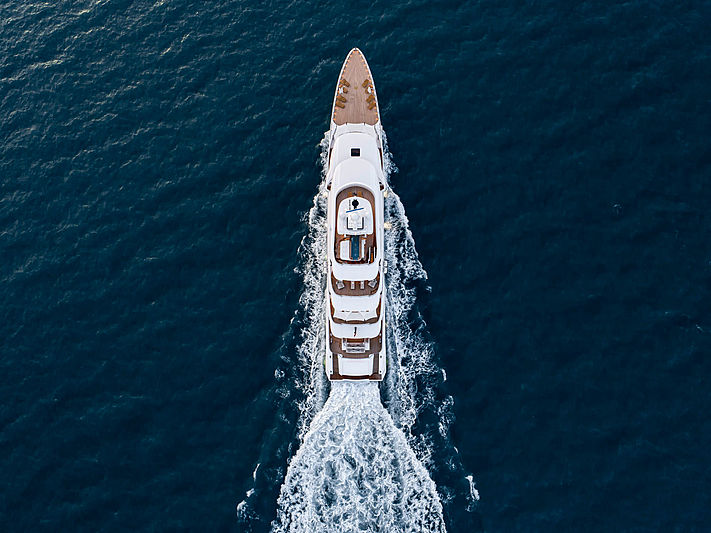