Home > News > Insight: Nick Mulder on keeping the family in the business

If you were looking to stage the perfect scene of a family-run shipyard for a visiting journalist, you could do worse than follow the example of Mulder Shipyard. After taking in the monotonous landscape between Amsterdam and Leiden by train and bus on a muggy June afternoon, I stepped off the bus into an industrial area of the typically unpronounceable Dutch town of Zoeterwoude. In an area populated by appliance shops, Carpetright and electronics shops, I looked for the boats. Spotting the sign for Mulder Shipyard, I turned the corner and made tracks. 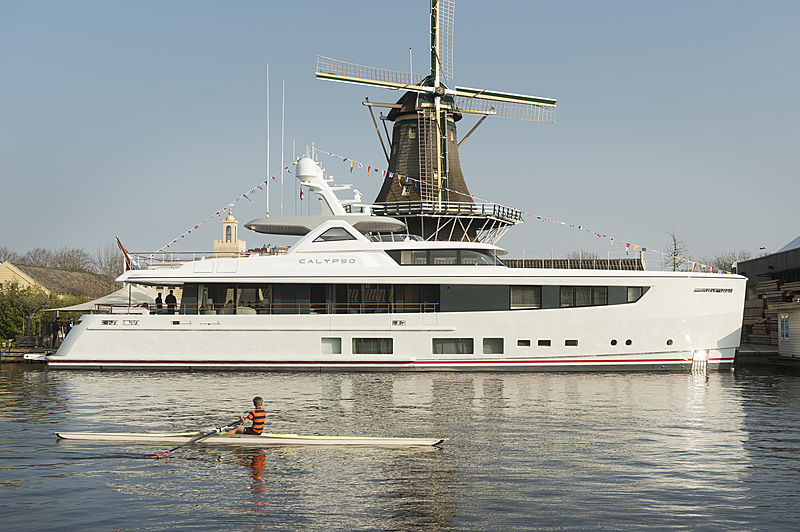 The scene in question which Mulder laid on was of Dick Mulder, long-time Managing Director (son of Dirk Mulder Sr. who established the shipyard in 1938) carefully pouring over the details of a cabinet for one of their in-build vessels on the work floor surrounded by carpenters. But, of course, there was nothing staged about it. As Commercial Director Nick Mulder gave me both the tour and the lowdown on Mulder’s build process (“It’s totally in house. We like to be able to build a complete yacht because then you have all the knowledge and if one of our vessels needs direct assistance, we know exactly who to ask and we can act quickly”), it became clear that this family-run business is dedicated to the details, genuine and personable to the core.

For the 31-year-old Nick growing up, it would have been impossible not to be involved with boats. “I’ve basically grown up on the shipyard, our house was literally part of the shipyard and it was always what I desired to do,” Nick tells me. “In the Netherlands, you have something called a ‘kermis’, or a travelling fair which moves from village to village and when I wanted to go there as a child I would do some little jobs in the facility like painting to make a few euros. We spent weekends on boats as long as I can remember and I had my own little RIB which I was very keen on and I would use with friends.” 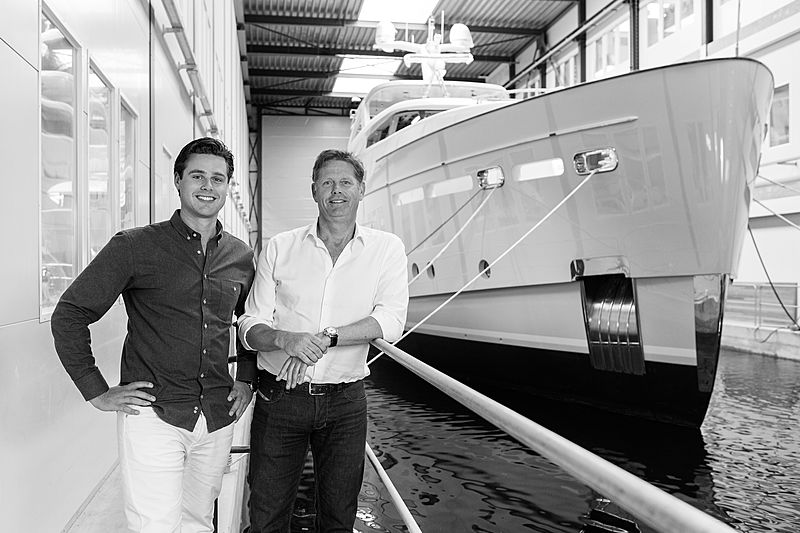 Photo: Mulder Shipyard
This early hands-on involvement with the business has continued throughout Nick’s adult life and forms a key component of their Mulder strategy which is geared towards maximising the company’s efficiency. As Nick explains, “Business-wise, we like to be a flat organisation where we can make decisions fairly quickly. When my father is on the workfloor, he can make decisions on the spot, whereas if you are not family-owned then it is much more bureaucratic and you have to go back to the desk and get it approved by an owner’s rep or whoever.” The most major decision made by the family in recent years was the opening of the new shipyard in Zoeterwoude-Rijndijk (ten kilometres from the original yard in Voorschoten) in 2013.

With the construction taking place over two years during a time when the yachting market wasn’t exactly booming, this was what Nick describes as “a well-calculated, long term decision” for his father. Prior to the build of the new facility, the Mulders had already relocated their interior and stainless steel departments to alternative sheds located two and 15 kilometres away due to size constraints, so it was a prime time for them to merge the three. In fact, the timing of this major investment actually played in the family’s favour. “Many people were happy if you had work for them, delivery times were short, people really wanted to sell and that was much better for the price and the investment in the end.” Notably, Mulder will be bringing the old facility back to full production in the upcoming months to build their range of Favorites and have recently acquired a covered marina to host the vessels for their clients. 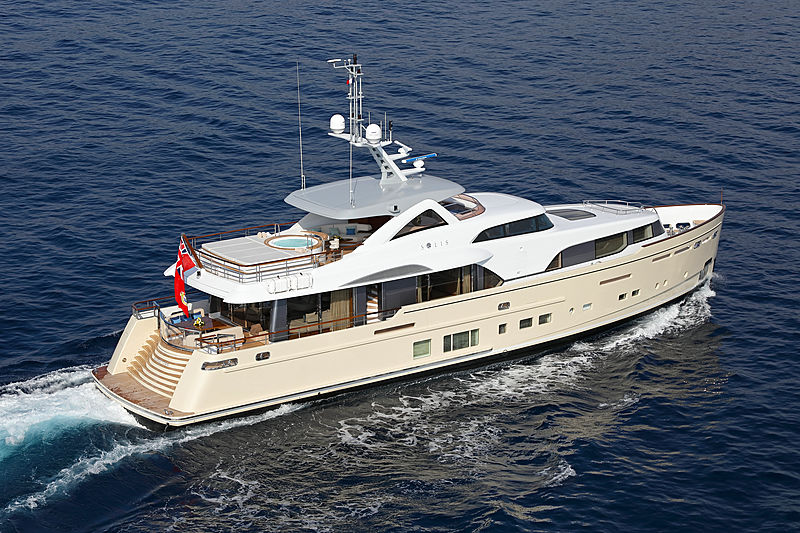 Moving to the new facility, the shipyard now has the capability to build yachts between 15 and 45 metres, delivering their first vessel over 30 metres in 2015: the 34-metre fully custom Solis. She was designed by the British studio Claydon Reeves, with whom the Mulder have continued to work on numerous projects including the first-ever Mulder ThirtySix, Delta One, delivered in 2017, the exteriors of which were by Claydon Reeves, with interiors by Claydon in collaboration with Vickers Studio.

Homing in on the Mulder range, this starts with the 15.6-metre Favorite 1500, the slightly larger Favorite 1700 (17.8 metres), the convertible series which hasn’t been built by the yard since 2012, the wheelhouse series (of which one is currently in production), the 28.65-metre exploration-style Mulder 94 Voyager (a “long-range gentleman’s motor yacht”), the Mulder ThirtySix superyachts and custom projects like Solis. 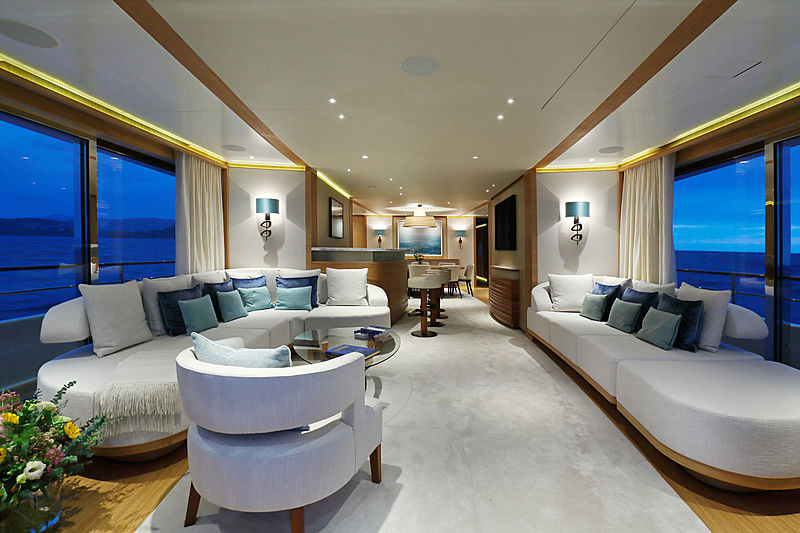 Over the past two decades, in a shift which displays a clear growth in confidence over time, Mulder has moved from building primarily full custom yachts to semi-custom boats. “If you look at our fleet from the early 2000s, all of them were fully custom, because we just built what the client wanted. But what we actually saw was that when my father built a boat for himself, it was a very good boat and many clients were inspired by that. They’d say, ‘you did it like that and we liked it, can we do it the same on our build?’ We are a yachting family and have been on boats all our lives, so we know what people want.”

Increasing the efficiency of the build process has been integral to Mulder’s strategy over the past decade and represents a return to the business model of Dirk Mulder senior, who would build multiple hulls at the same time on stock and sell many of his boats just before delivery. As Nick explains, “Hull production takes up about 50% of the total build time of a yacht and things like the engine room are almost always the same. You can win a lot of time without really semi-customising the boat for colour, fabrics and things that really matter to the owners.” With the hard work already done by Mulder, potential owners can have their brand new superyacht ready to hit the water after only a few months. 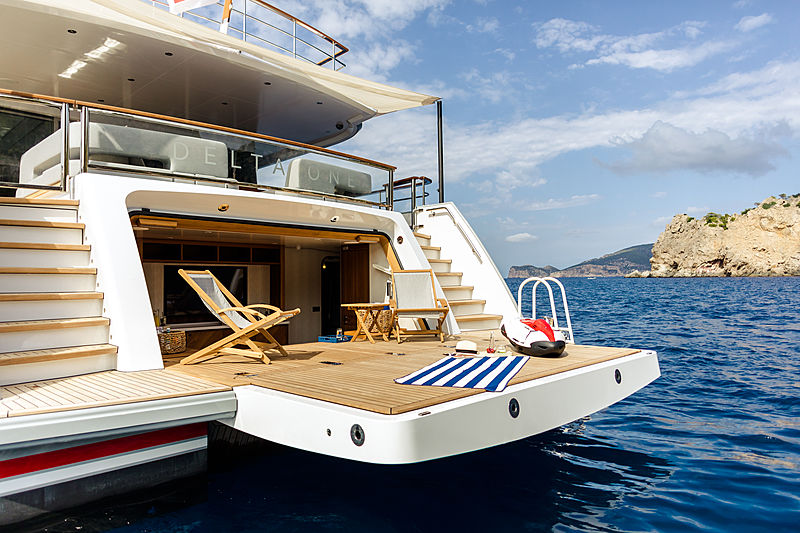 Photo: BlueiProd/ Franck and Olga DromasOf course, this model also has its advantages for the shipyard too, as long as they have the finances to support it. “When you’re building boats on spec or at least starting the hull production then you’re much more efficient and in control of your planning and this is something we are extremely strong in. You need capital for it, but as long as that it well-arranged then you can deliver very high-quality yachts within a reasonable time-scale.”

Interestingly, according to Nick, the two most popular Mulder models serve as bookends for their range: the Favorite 1500 and the Mulder ThirtySix. The renewed Mulder Favorite line was developed in 2008 by Dick Mulder as a tribute to the Favorite cruisers built by Dirk Mulder Sr since 1955, with the first relaunched 1500 designed for the family’s private use. Since then, the classic vessel has proven to be immensely popular - particularly for use in the inland waters of the Netherlands - and the yard has sold more than 20 units since the series’ revival. However, although keeping their marketing relatively local remains a priority for the shipyard (“We invest heavily in Dutch marketing and in all the magazines here in Holland. Holland, Germany, England and Western Europe, in general, are very important markets to us”), the boats themselves are going worldwide. 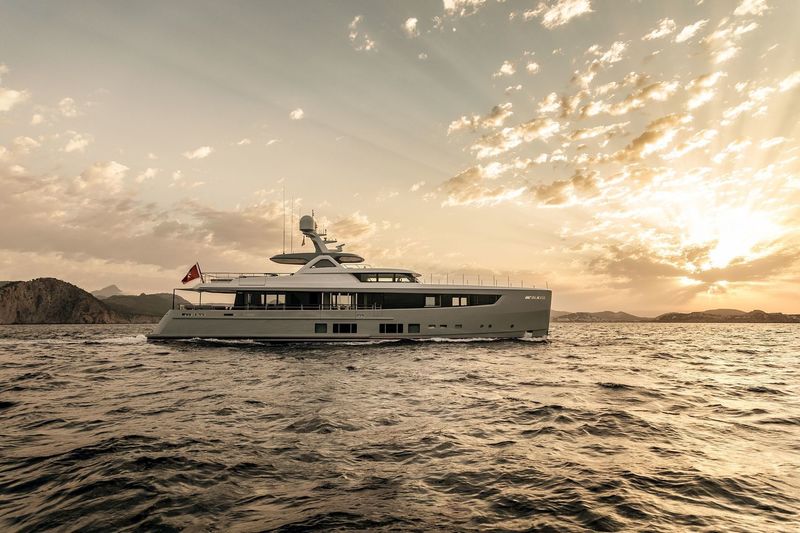 At the top end of their size range, the Mulder ThirtySix boats Delta One and the recently delivered Calypso have been gaining plenty of attention in the industry, with Delta One coming home with a win at the World Superyacht Awards in 2018 and the reaction to Calypso at this year’s MYBA Charter show described as “completely crazy” by Nick. As he explains, there is a lot to admire in the ThirtySix, “it has an intelligent layout, masculine design and the fuel economy is just amazing. It’s a superyacht with all the facilities you could need but it’s still very human-sized, with no void spaces on board. When people stepped on board at MYBA and came into the VIP, which is full beam and on the lower deck, everybody just said: ‘wow!’” 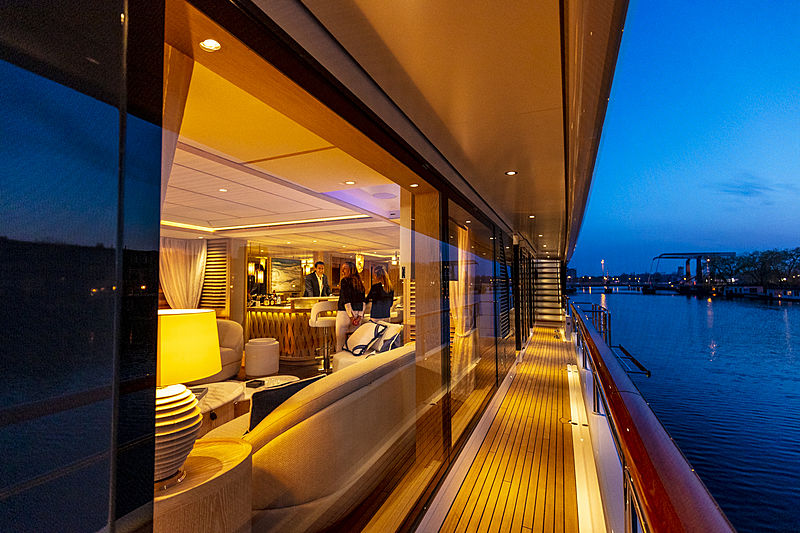 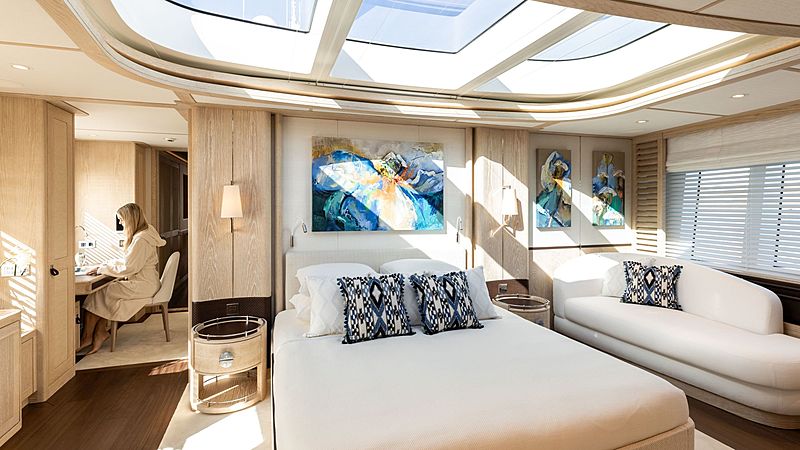 Indeed, although Mulder is maintaining its efforts on marketing in Europe, the Dutch shipyard is gaining attention from markets further afield without even trying. “We have seen a big increase from the US and have been speaking to quite a few American potential clients over the last few months which is interesting because we don’t do any marketing there.” The reason? It could well be down to the ThirtySix: with her eight-metre beam and draught of just over two metres, she is a boat which would be well suited to cruising in the Caribbean and the Miami area.

These budding possibilities abroad do not mean, however, that the Mulder family are tempted to upsize their boats or drastically change strategy. “Our market segment is now from 15-40 metres, that’s a pretty wide area. We get a lot of requests for that size and we see that, as many owners are getting older, or their families are changing, or they are relocating, they still like boats but they don’t need their big boat with the big crew anymore. They still like to have very high-quality yachts, but they enjoy the fact that they can drive the boat themselves.” 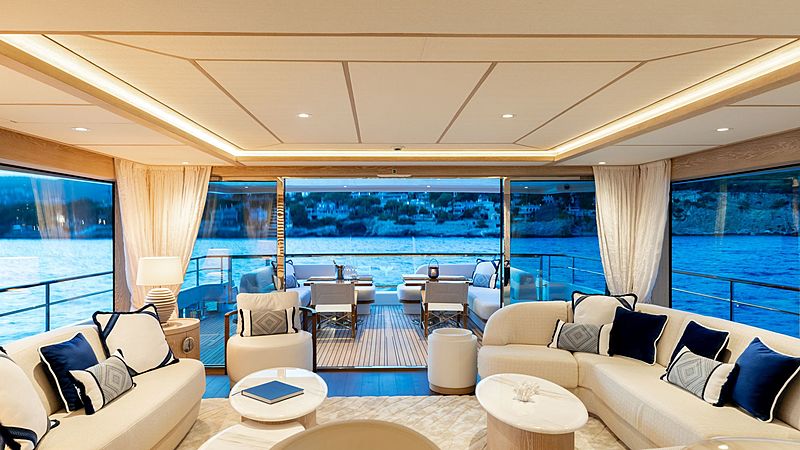 In terms of the number of yachts delivered, most Mulder yachts are under 24 metres and, as far as Commercial Director Nick sees it, this will always remain one of the main drivers for the company. “It is a specific choice for us. When you’re only building bigger boats with a bigger budget, it is very easy to get lazy; when you’re building smaller yachts with smaller budgets you need to keep triggering your organisation to stay efficient, to stay innovative and really focus on the things that are important without overinvesting in any kind of discipline. From the moment we had the capacity, we did get questions about building bigger boats, but we like to take small steps because then you keep control of what you’re doing and this is immensely important. We all know the stories of small shipyards building a 50-metre and then having trouble finishing the boat. Mulder is a long-term focused organisation so we’re not in a hurry.” 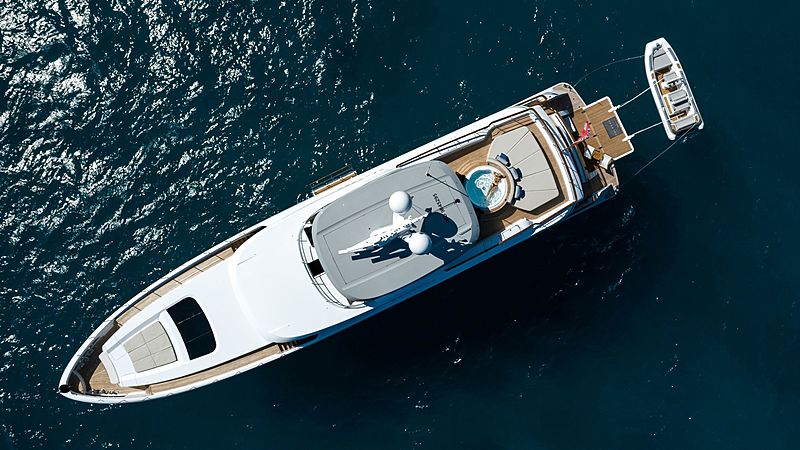 As for the future, the yard has a new 22-metre vessel in development and a third ThirtySix currently in build and set to be completed next spring, currently known as Project Mana. That said, however, there are plans in the pipeline to build slightly bigger superyachts in the future. As Nick explains, “We are currently working on a bigger sister from our 36-metre at this moment. I think if it’s fast, it will be 2023 when she will be in the water, but it could be a year or two years later.”

Coming full circle, what does it mean to Nick to be part of this three-generational family business today? “I’ve thought a lot about that question and there are so many different ways to answer it, but the most important one is that our family name is always on the side of the boat. We stand behind our product and want to deliver quality. We only deliver 4 or 5 boats annually, and if you would scale up to 8-10 boats then could you lose track of what’s happening. You’ve seen my father looking at the detail on the shop floor; that is something of great value to us - we can keep paying attention to the details and we will continue to do so because it’s our name on the side.” 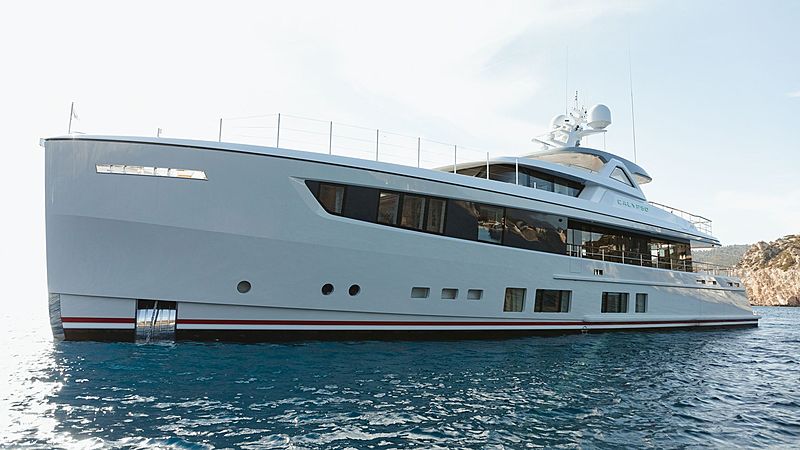