How Mark Dalio is boldly going where no man has gone before with OceanX.

“People think that the oceans have been vastly explored. They have this notion that space it the final frontier, that the planet has been seen for the most part… but it hasn’t. We need to change this mindset and make people fall in love with the oceans,” says Mark Dalio, Founder and Creative Director of OceanX Media.“I think that people are starting to feel it now.” 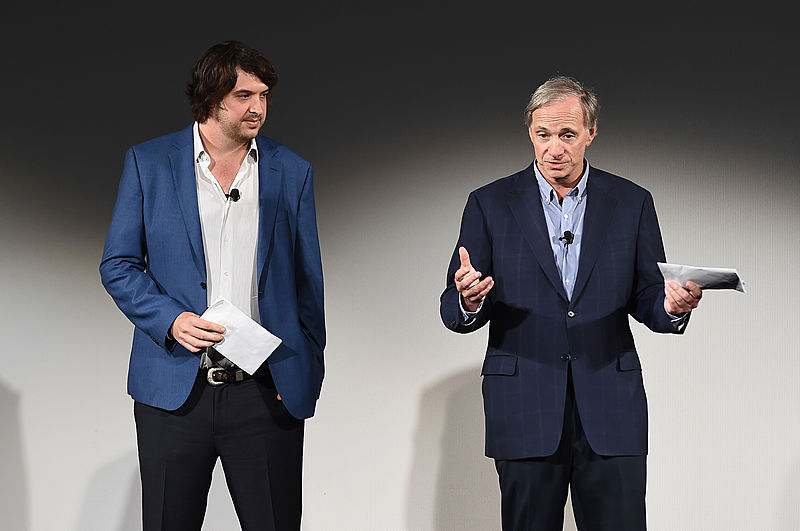 Photo: OceanXSon of billionaire hedge fund founder Ray Dalio, the father-son duo behind the OceanX initiative have been involved in ocean exploration for many years. In fact, it was researchers in a manned-submersible launched from OceanX’s state-of-the-art exploration vessel Alucia that successfully managed to captured the world’s first ever footage of a giant squid in its natural habitat six years ago. Since then Mark and the research team on the 55.75-metre Alucia have worked with the BBC on the landmark documentary series, Blue Planet II, and co-produced the giant-screen film Oceans: Our Blue Planet. Now through OceanX Media (formerly known as Alucia Productions), Mark aims to continue the work of legendary Jacques Cousteau, French underwater explorer, diver, filmmaker and inventor, and bring the wonders of ocean exploration to the wider public. In order to further the company’s reach and its overall production capabilities, OceanX has begun work on Alucia 2, a new explorer yacht which is set to be the most advanced exploration vessel to date. 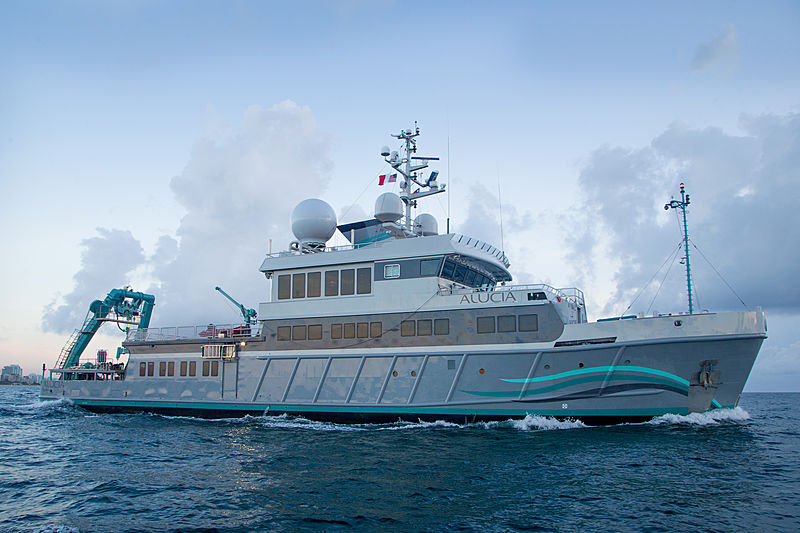 Photo: James DuBourdieuBut Mark’s interest in our oceans didn’t begin on a quest for the elusive giant squid.  It goes back to his childhood in Connecticut, the USA where he spent much of his time with his family in nature, out on the water or camping. “Learning how to scuba dive when I was young changed my view of this amazing underworld - a world that many people still do not know much about. Going on these trips with my family inspired me to tell stories of the oceans.” It is clear that Mark had a strong passion for storytelling, cinematography and creative narratives from a young age onwards, but it was not until he was working for National Geographic in Los Angeles and saw first hand how Alucia was used to capture the footage of the giant squid that he realised how important the link between media and science really is. “One of the first expeditions on that ship, separate to the work I was doing at the time, was the giant squid expedition,” recalls Mark. It was in 2012 when Edith Widder, oceanographer and marine biologist, and her team of researchers became the first scientists to capture live-footage of the giant squid using bioluminescence off of Japan’s Ogasawara Islands during an expedition on Alucia. 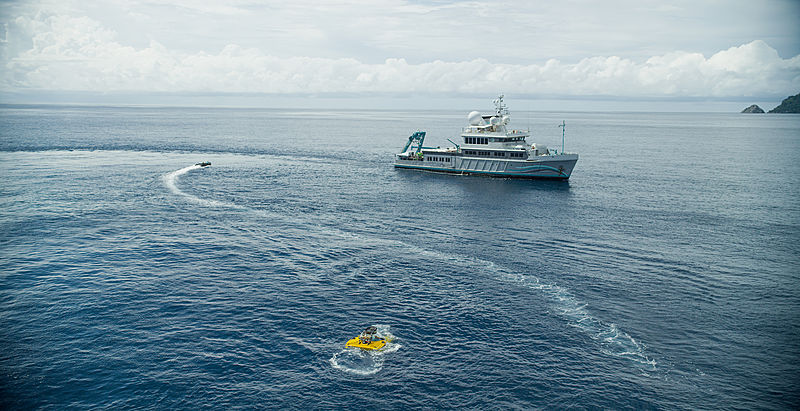 Photo: Ron ChappleAlthough Mark himself was not part of the research team that discovered the giant squid, he has since been on a number of expeditions. On his first submersible experience, he travelled down more than 1,000 metres underwater in search of a frozen whale carcass. “We were looking for 20 minutes or so and I saw this big object in the distance - we thought it was the whale so we kept going towards it. When we got closer we saw that it was moving. I thought it was just the current, but it ended up being this massive six-gilled shark.” A prehistoric shark which tends to live between 50 to 200 metres deep in the oceans, these animals are known scavengers. “What I thought was a whale, was actually a massive shark taking a huge bite out of the whale carcass - it was quite a sight to see.” Although it was frightened off by the manned-submersible lights at first, the shark returned and rubbed against the submersible, giving them a bump, enough to get Mark’s adrenaline pumping. “I did not know whether to be fearful or excited - I just felt a whole range of emotions. It was an incredible introduction to the deep sea. Coming back from that expedition really opened my eyes as to what can happen in the depths.” 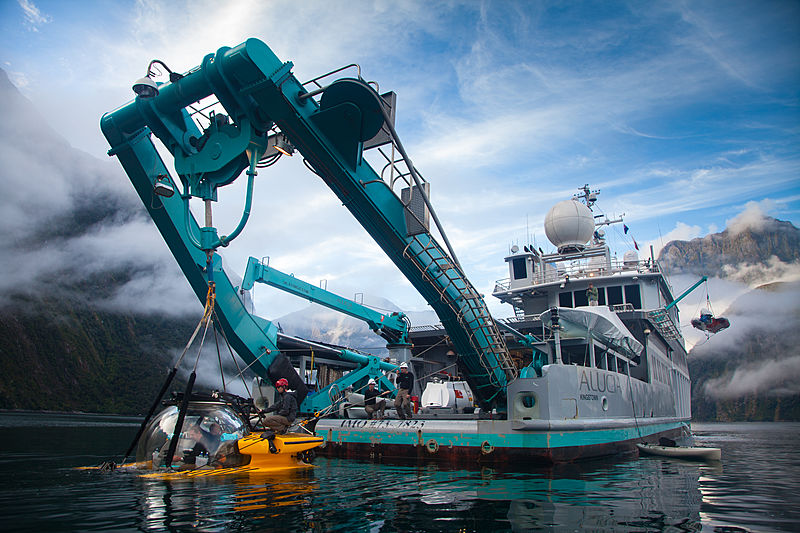 Photo: Ian KellettOnce the footage of the giant squid was revealed to the world, it captured the attention of millions of people around the world from young to old, sparking their imaginations as to what mysteries the deep oceans still hold. It was at that point that Mark really understood the combined power of science and storytelling. But in order to start his company, he had to get one key person on board... “The first person I had to convince was my father,” says Mark with a laugh. “He was a little reluctant at first, but the team was already overseeing the science and ship operations and it made logical sense to have a media production company attached to that. Thanks to the work that I was already doing and the connections that I had made, everything came together very well in the end.”

But was the attachment of a media production company so essential to the development of the OceanX brand we wonder? “I think that scientists, marine biologists and partners that we work with, are very important, but even more so is the question of how we get that information to a wider audience,” stresses Mark. “How do we convey the importance of studying and exploring the deep sea? I think when media goes hand in hand with exploration it’s even more impactful than if you just focus on one or the other.” 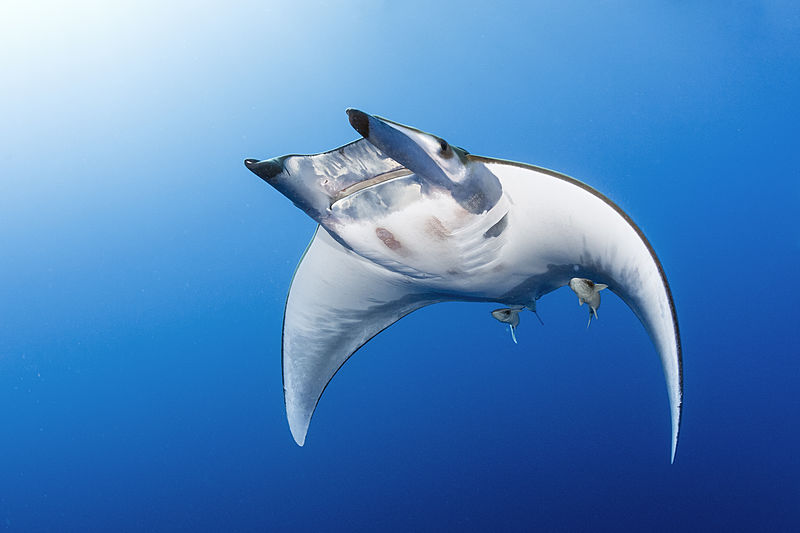 Photo: Franco BanfiSince connecting OceanX Media to a number of the expeditions taking place on Alucia, including the search for the Humboldt squid off the coast of Chile and exploring the giant Australian barrier reef with the legendary Sir David Attenborough, the name has become synonymous with ocean exploration and conservation in many people's mind. For Mark, it's hard to narrow down the milestones OceanX Media has reached onboard, but a few spring to mind when asked. “One milestone was exploring the brine pools - talk about alien world! You have this very unique ecosystem, which is quite deadly for a lot of the creatures who live down there. But there are a lot of microbes that can thrive there - mussels, cutthroat eels and squat lobsters, as well as hagfish. It almost becomes this oasis in the desert where this deadly lake actually harbours a lot of life.” 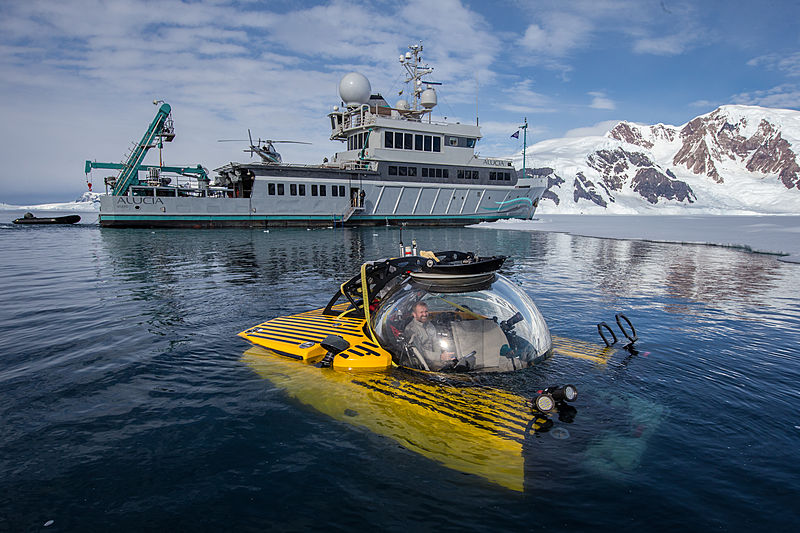 Photo: Ian KellettOver the years the explorer yacht has traversed the furthest waters across the globe, carrying dedicated crew members, scientists and field experts, who work together with production workers to document their discoveries and travels. Alucia has been a crucial part of groundbreaking scientific discoveries as OceanX Media strives to develop a cohesive narrative around those findings through a multimedia approach. However, in order to expand upon their research capabilities as well as their overall productions, OceanX is set to launch her successor, the 85.3-metre Alucia 2 in 2019.

“Alucia has been a fantastic vessel for us. She is really one of a kind,” explains Mark. “But one of the issues we ran into was the number of people we could have onboard.” While up to 16 people from the media and science teams can stay onboard of Alucia, when considering how many people are needed per team, the maximum amount adds up very quickly. In addition, the team faces a few complications when using one of the two-manned submersibles and a remotely operated vehicle (ROV) at the same time on Alucia as they work off of the same platform. “With the new vessel, we are taking what we were doing with Alucia and blowing it up even further.” 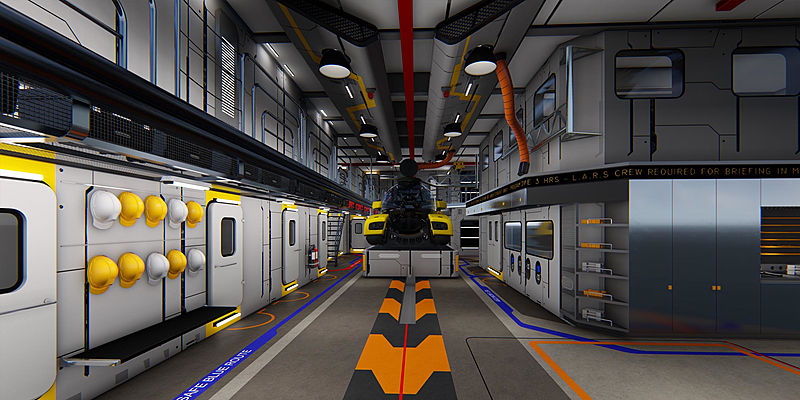 Photo: OceanXAlucia 2 will comfortably accommodate many more people on board, although Mark adds that the team is still configuring the layout for the optimal use of space. “That amount of people lets you build on what is possible on both the media side and the science side.” Alucia 2, a former oil exploration vessel which will be retrofitted in the Netherlands, will also build on the technical capabilities offered on her predecessor. OceanX brought scientists on board to help create the layout of the new wet and dry marine research labs and select which equipment to use. At the same time, they also brought on a production designer to help develop the best state of the art media production lab and worked with filmmaker and ocean explorer James Cameron on her filmmaking capabilities. “The spaces themselves are quite extensive compared to Alucia. We have full dry and wet labs - the dry labs are state of the art and very expansive on Alucia 2.” 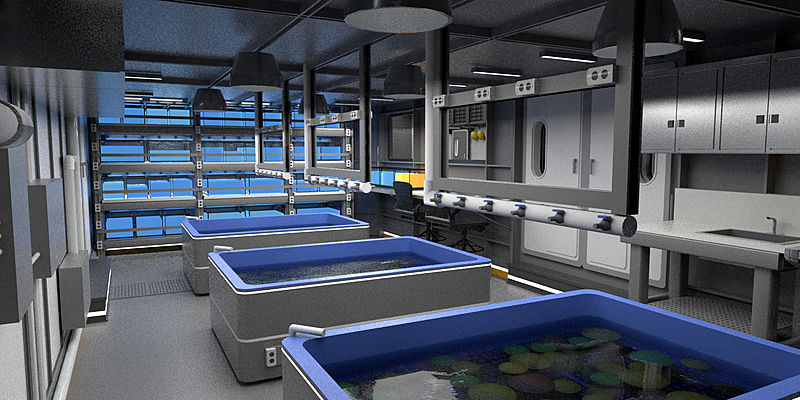 Photo: OceanX“The wet labs offers a great opportunity to film some of these creatures in a macro-film setup. It’s very much similar to what happens in the depths, expect that it’s happening right in front of you.” As you would expect from any great explorer vessel, Alucia 2 also offers sufficient space to carry a helicopter onboard in a dedicated hanger, two manned-submersibles as well as ROVs and drones. “The science labs and the media labs can also transit a live a stream, from anywhere in the world,” adds Mark. “I think the combination of science and high-quality production capabilities make Alucia 2 unique. There are not many ships which have equal capabilities and I think what we are doing is combining expeditions and media in a way that no other ships have done.” 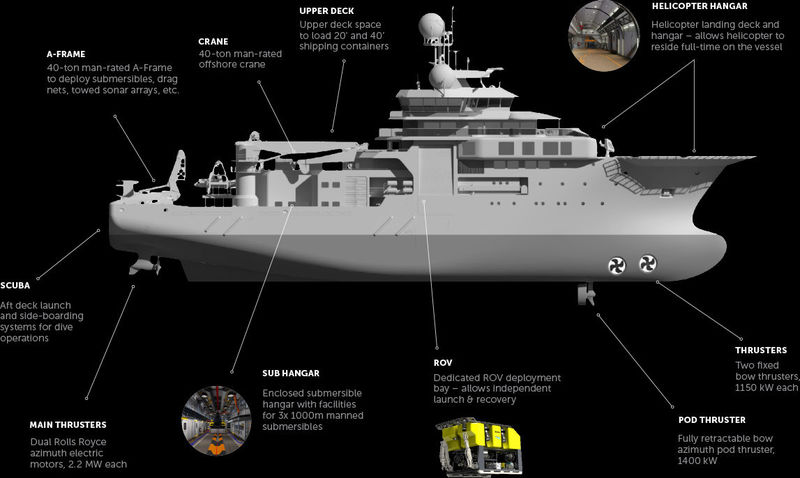 Photo: OceanXOceanX Media is more than just ocean exploration and media production for Mark - it is also about connecting with human emotions. “I think being able to showcase marine life down in the oceans is fantastic. But to be able to put the viewer in the seat of these scientists is as equally important. If a young girl sees the next generation of Sylvia Earle and it inspires her to become passionate about the oceans, then that’s priceless.” By tapping into the viewer's emotions, he hopes to spark their imagination and encourage them to explore and care for the oceans. “We are trying to get people to understand what is actually out there and why they should care, so that when they do hear about the current issues and they hear about the possible solutions, then they will be a lot more receptive to them.” 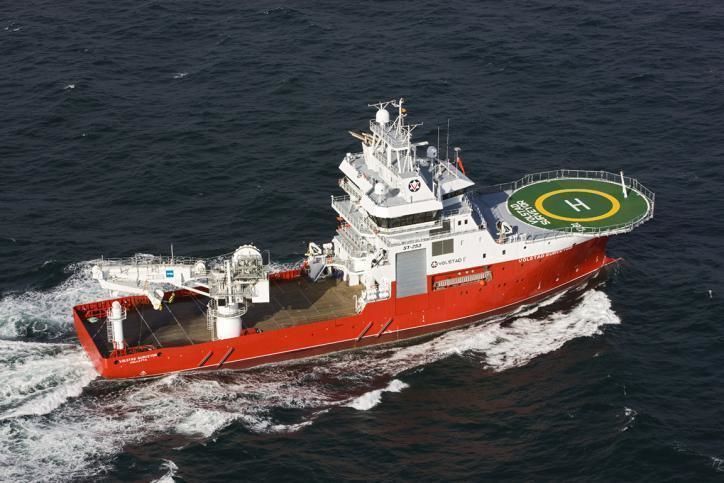 This is also why the company has been looking at how they communicate with their audience, focusing on numerous channels like broadcast TV, social media platforms, feature-length movies as well as virtual reality, museums and science parks to reach audiences of all ages. One great example is their partnership with the American Museum of Natural History, where the two organisations created an immersive ocean exhibition, including imagery projections as well as interactive displays to truly open up ocean exploration to younger generations. “After seeing Oceans: Our Blue Planet, these families are able to go out and learn a more about the science behind the film in a way that is both enjoyable and accessible.” 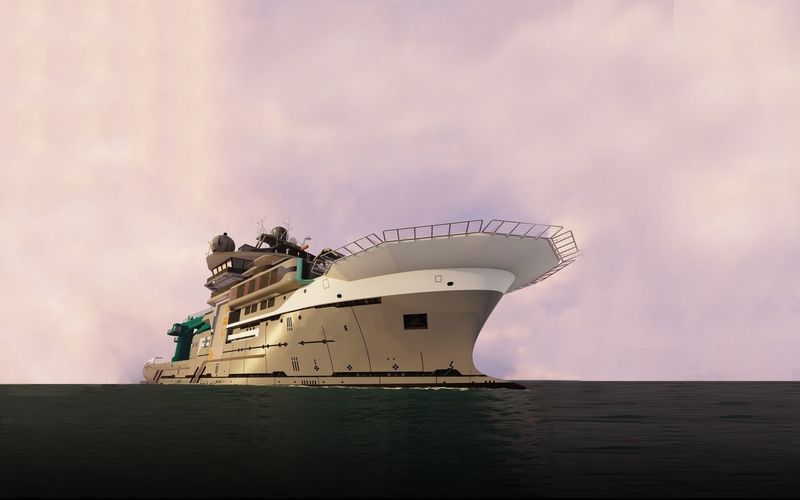 Photo: OceanXThrough OceanX Media, Mark is working tirelessly to bring a much-needed voice to the oceans by utilising the compelling stories around exploration to excite, inform and ultimately inspire viewers as to what lies beneath the surface. “It’s more emotional than logical, it really makes sense to conserve our oceans but people do not understand this message unless their heart is in it. So that’s what we’re doing. We’re aiming for their heart.” 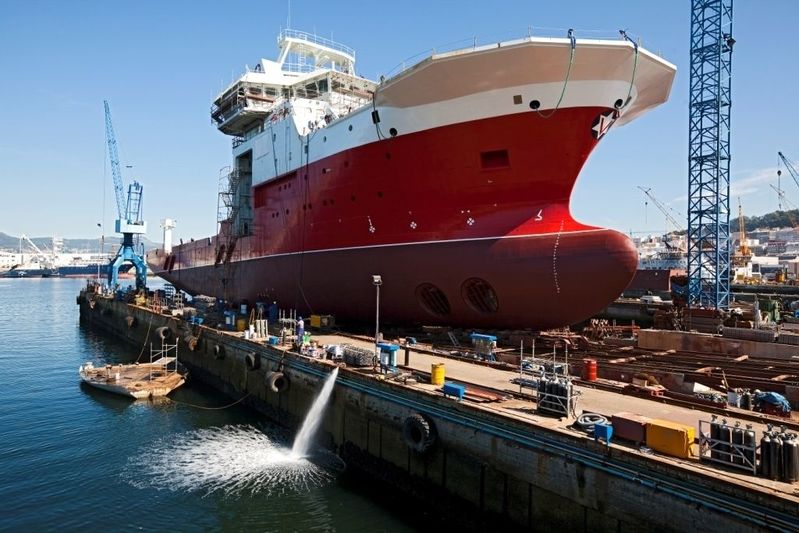 Explorer yachts Alucia and Umbra alongside in San Fransisco