After sailing twice around the world and completing a transit of the notorious Northwest Passage, 55-metre Galileo G is for sale. SuperYacht Times caught up with her European owner, Silvio Scaglia, during the Perini Navi Cup to talk about his adventures aboard the Vitruvius explorer yacht. 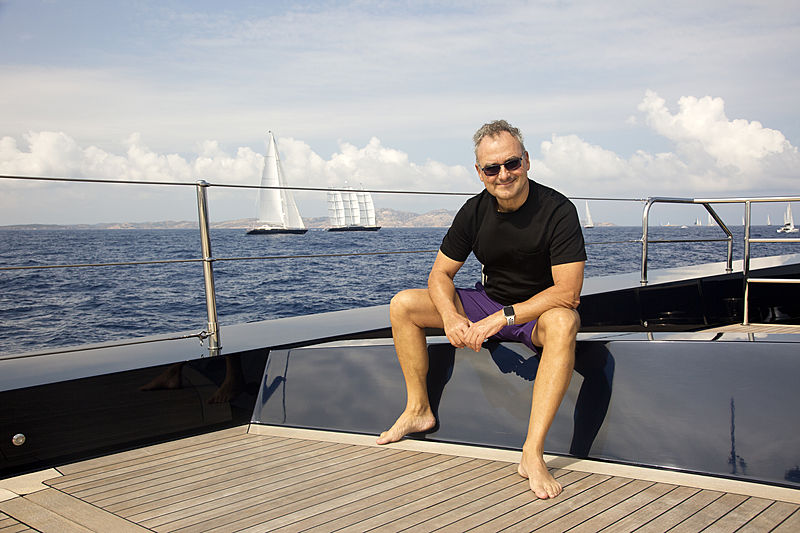 Photo: Justin Ratcliffe / SuperYacht TimesWhen Galileo G was launched in 2011, she represented a new kind of vessel. The second Perini Navi motor yacht to hit the water after 50-metre Exuma, her graceful profile by Philippe Briand disguised the fact that she was designed and built with a very specific purpose in mind: to navigate the Northwest Passage joining the Atlantic and Pacific through the Canadian Arctic Archipelago.

“The romance of the Far North had always fascinated me and we started planning the trip while we were building the boat,” says Silvio Scaglia over a breakfast of oven-fresh pastries on Galileo G’s aft deck. “It was literally in my contract with Perini Navi that the yacht should be suitable for transiting the Northwest Passage safely and comfortably.” 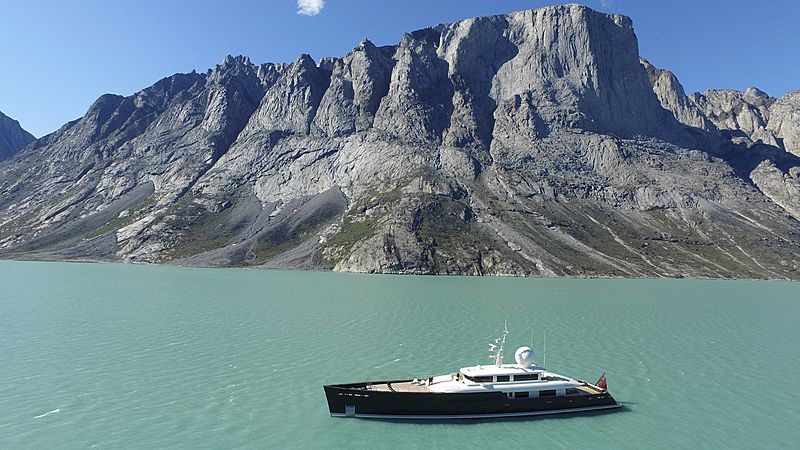 Photo: Silvio ScagliaScaglia brought his own experience to the project. He had already circumnavigated the globe aboard his previous boat, the 43-metre sailing yacht Vent d’Est (launched in 2002 by Vitters as Red Dragon). Although a sailor at heart and a qualified sailing instructor, he was aware that a motor yacht would be better suited to long-distance passage-making in high latitudes.

“After Vent d’Est, I realised that a motor yacht would provide the extra space for bigger tenders and more diving equipment,” he says. “But I didn’t want a typical ‘white boat’: it had to be a seaworthy explorer with a low centre of gravity, not too much windage, and have the elegance of a sailing yacht. Perini Navi showed me Exuma and, coming from a sailing background, I loved the idea of building with them.” 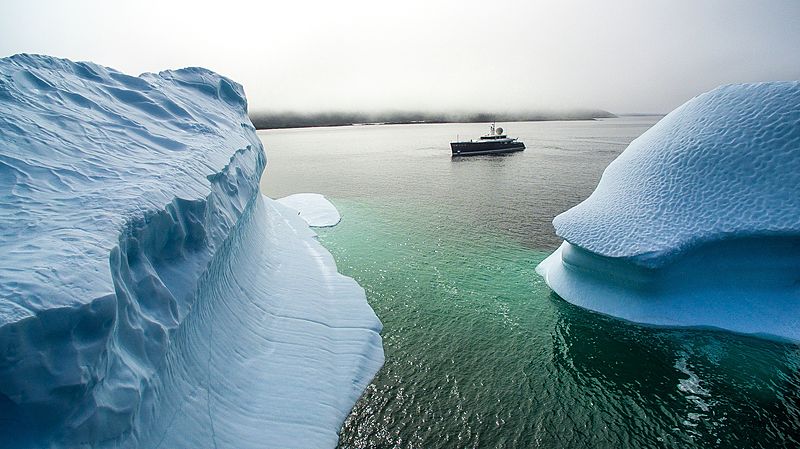 Photo: Silvio ScagliaScaglia’s first impression of Exuma, however, was that the all-aluminium yacht wasn’t rugged or big enough for his purposes. So Galileo G, rated at 725 gross tons, offers around 50% more volume and her hull is built of steel to Ice Class criteria with extra-thick plating. Other features that reflect her explorer vocation include the massive SeaTel satellite dome for navigating up to and beyond 70° North and South, a FarSounder sonar mounted in the bow, ice knives on the rudders, a powerful Naiad bow thruster for added manoeuvrability, super-tough Nibral propellers, a wave breaker on the foredeck, and heated deck gear to prevent them freezing up. Considering all these specialist features, it is somewhat surprising that Galileo G looks as elegant as she does and not more like an expedition vessel from the pages of National Geographic. 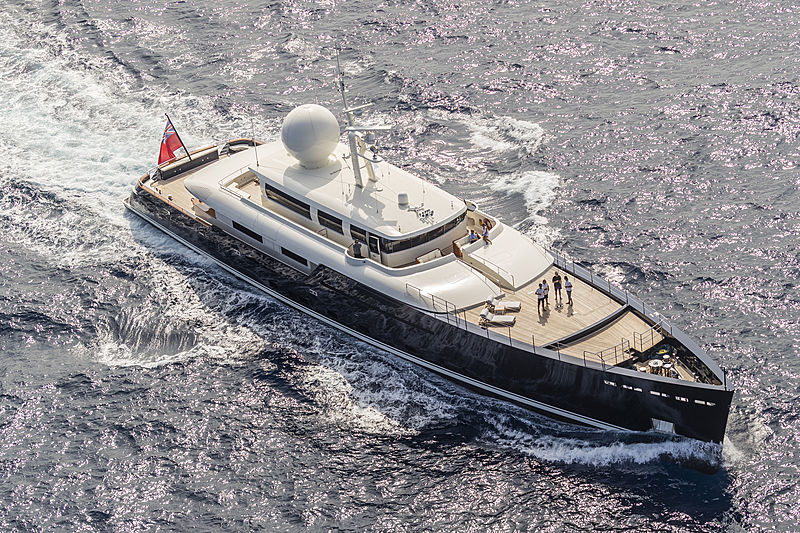 Photo: Studio BorlenghiBut one of the most appealing aspects for the sailor inside Scaglia is her so-called Briand Optimised Stretched (BOS®) Hull. With its long waterline, narrow entry and slimmed-down beam to maximise hydrodynamic efficiency, to all intents and purposes it’s a sailing yacht hull with stabilisers.
“The slippery hull combined with our large fuel tanks means we have an effective range of 9,000 nautical miles at cruising speed – an important consideration in remote locations where bunkering is hard to come by and the quality of the fuel may be suspect. We also have plenty of cold storage, so we can spend over a month at sea without re-provisioning.” 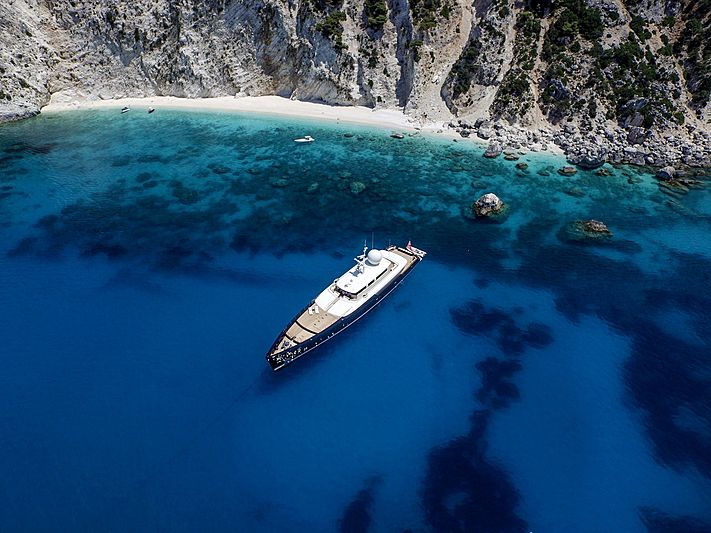 Photo: Silvio ScagliaRedundancy was another important feature and the yacht is designed so she can run on one engine in get-home mode, or to reduce fuel consumption still further. The trailing propeller still turns the other drive shaft, which on a conventional motor yacht can cook the uncooled gearbox when its engine is switched off. On Galileo G the cooling systems are connected and can be diverted from one drive unit to the other by simply opening a valve. 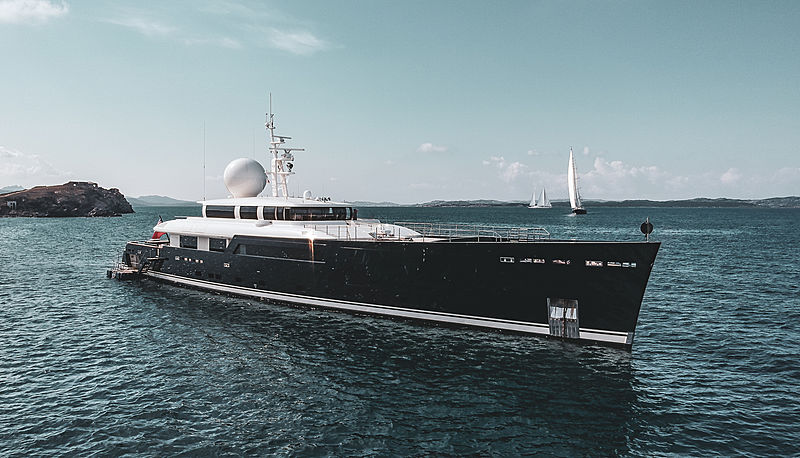 Photo: Charl van Rooy / SuperYacht TimesFollowing her launch and debut at the 2011 Monaco Yacht Show, Galileo G crossed the Atlantic to the Caribbean and transited the Panama Canal before heading out into the Pacific to the remote Cocos Islands, one of the best dive sites in the world thanks to nutrient-rich currents that attract large schools of Hammerhead sharks and other pelagic life. It was here that Scaglia, an experienced scuba diver, had a nerve-wracking moment: “We were diving with a large group of Galapagos sharks that are not usually aggressive,” he recalls. “But the small fish they were feeding on were using us as cover and the sharks were obviously excited. It was a rare occasion when I’ve felt distinctly uncomfortable with sharks around.” 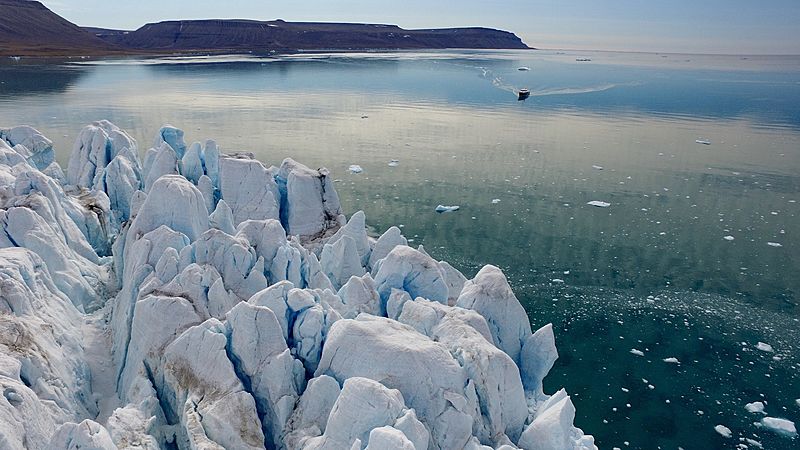 Photo: Silvio ScagliaThe original plan was to attempt an easterly transit of the Northwest Passage in the summer of 2012 and after a stopover in San Diego for maintenance work, Galileo G travelled as far north as Vancouver before the crossing had to be postponed due to logistical setbacks. Nearly four years of world cruising passed before she was ready to tackle the Passage again, this time in the opposite direction. In mid-July 2016, her owner flew to Greenland and joined his waiting yacht in the 100-mile long Kangerluarsuk Fjord. As chance would have it, they met up with another Perini, 56-metre Rosehearty, in the same fjord as the sailing yacht was setting off on its own Northwest Passage expedition.

After bunkering, provisioning and filling up the freezers with abundant Arctic Cod, they set a westerly course amidst a procession of icebergs for Baffin Island, the traditional jumping off point for the Northwest Passage. Joining the crew was also an ice pilot, and a naturalist from EYOS Expeditions to help spot the Arctic wildlife from whales and walruses to polar bears, caribou and musk ox. 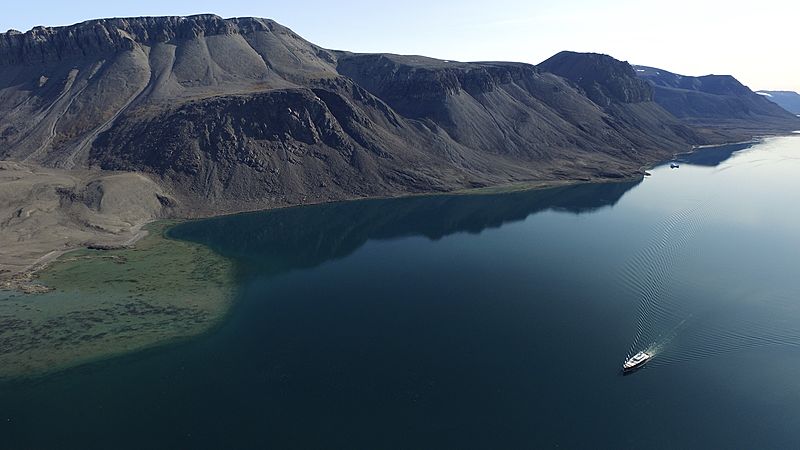 Photo: Silvio ScagliaThere are several sea routes across the Canadian Arctic Archipelago, but Galileo G opted for the first one opened up by the Norwegian explorer Roald Amundsen between 1903-06. This took the yacht around the bottom of King William Island, where two ships in a British expedition led by Sir John Franklin became trapped in the ice and were lost in 1846. The episode remained a maritime mystery for 150 years, spurring multiple expeditions and investigations to discover how the ships and their crews came to grief. 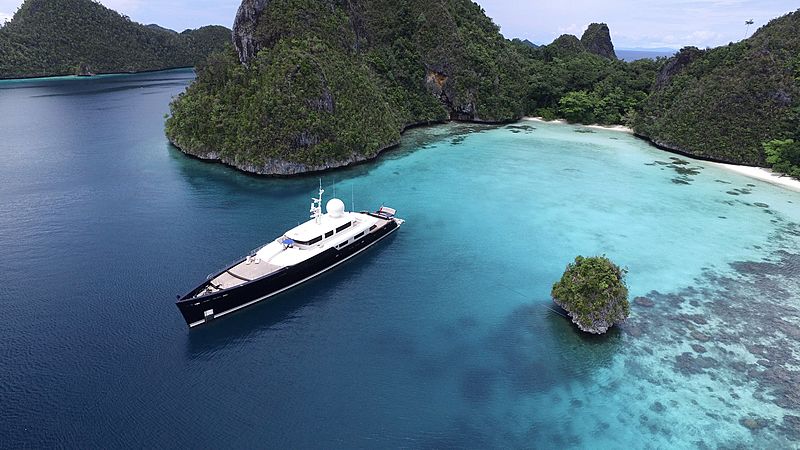 Photo: Silvio ScagliaIt was not until 2014 that the wreck of one of the ships, HMS Erebus, was finally found using side-scanner technology. Galileo G carries the same sonar system that creates a detailed image of the seabed and the yacht engaged in a little (unsuccessful) wreck hunting of its own in the waters off King William Island. Franklin’s second ship, HMS Terror, was identified shortly after Galileo G had passed through the region.

“I find wrecks fascinating because there’s a whole story behind them and diving them is a good excuse to learn a little bit of history,” says Scaglia as we leaf through photographic books he has produced of the far-flung destinations visited aboard both Galileo G and Vent d’Est. He stops at an image of the American ocean liner SS President Coolidge that was sunk in 1941 by wartime mines off the island of Espiritu Santo, part of present-day Vanuatu. Other wreck sites he has dived range from the ancient remains of a Roman galley in Cephalonia to Chuuk Lagoon in the middle of the Pacific, which is littered with Japanese warships destroyed by an American bombing raid during the Second World War. 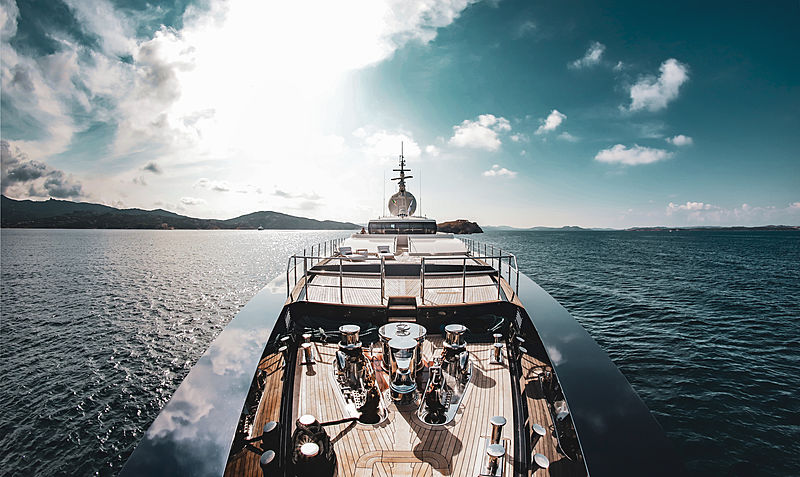 Photo: Charl van Rooy / SuperYacht TimesWhen the itinerary coincided with their studies or holidays, the owner was sometimes joined by his children on these trips. But the month-long transit of the Northwest Passage was too long and too remote for them to accompany him. Even with the melting ice brought on by climate change in recent years, there was also an element of risk involved. Although he jokes that the biggest challenge was keeping the internet working, Captain Tom Buddle was well aware of the potential hazards:

“The navigation without today’s technology would have been tricky,” he admits. “In white-out conditions, you’re always wondering at the back of your mind whether to stop or push on. The radar picks up the big bergs, but the growlers [small icebergs that float with less than one metre showing above the water] are hard to spot even with the FarSounder. Of course, it was reassuring to have the ice pilot on board, but we also had complete confidence in the boat.” 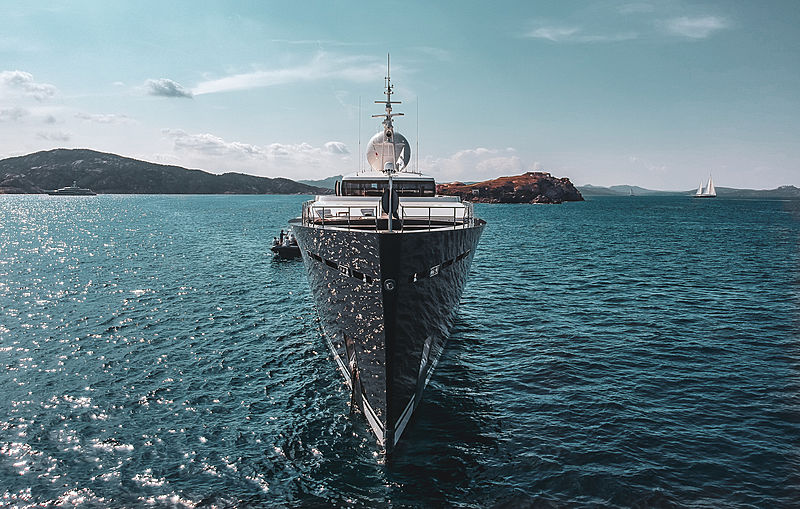 Photo: Charl van Rooy / SuperYacht TimesBy the first week of September 2016, Galileo G had reached Prince Albert Sound and was approaching the end of her Arctic adventure as one of just a handful of yachts to complete the Northwest Passage. Her owner and guests disembarked after the voyage of a lifetime, but the yacht continued on across the Bering Sea between Alaska and Russia to Kamchatka and into the Pacific Ocean to continue a second world tour that took her to Japan, Indonesia, the Philippines, Australia and New Zealand. 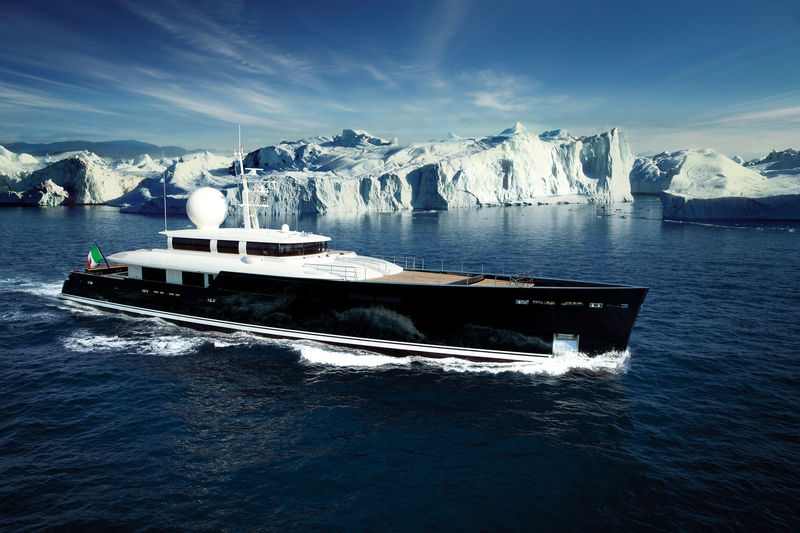 Back in the Med last summer (after crossing from Auckland to Panama without refuelling), Galileo G spent the season lazily cruising Corsica, Sardinia, Sicily and the Amalfi coast. Then in September, she joined the fleet of Perini yachts attending the Perini Navi Cup in Porto Cervo, just prior to the Monaco Yacht Show where this time she was listed for sale with Burgess. 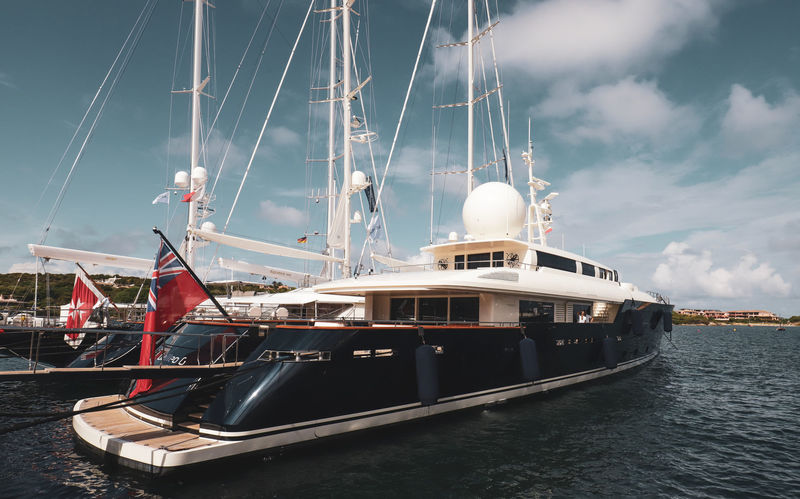 Photo: Charl van Rooy / SuperYacht TimesHaving covered some 90,000 nautical miles crisscrossing the oceans over the past seven years, it’s hard to imagine that any future owner will use the yacht quite so intensively to roam remote corners of the globe. But it’s even harder to imagine that her current owner will remain without a yacht for too long.

“I’d like to build another boat eventually,” he admits. “I think it would be a bit bigger than Galileo G and would probably have diesel-electric propulsion. My cruising days aren’t over yet: after all, I still have to explore South America and Antarctica!”