Home > News > Insight: At the yard with 68m Project Ragnar

Fans of the TV series Vikings will be familiar with Ragnar. Based on a legendary Norse warrior king, he was the main protagonist until his death in a pit of snakes at the end of the fourth series. The connection between the fictional character and project Ragnar is RWD’s aggressive restyling of the steel superstructure inspired by ancient weapons of war. 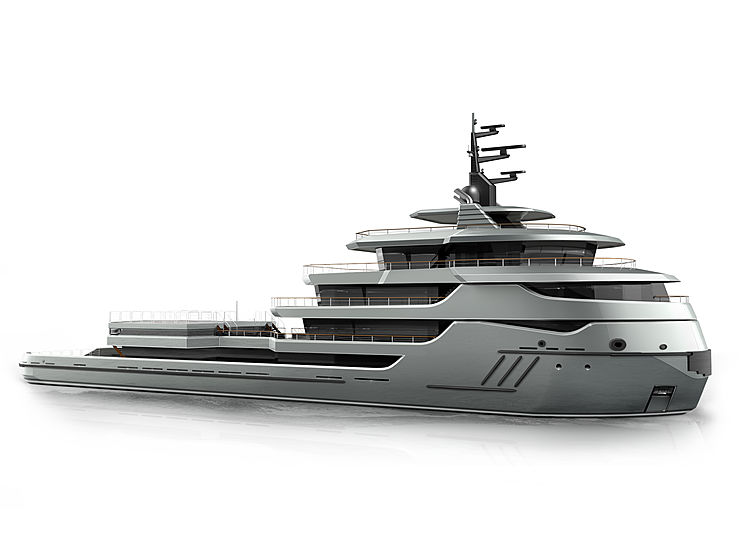 “The owner is hugely interested in medieval battles and weaponry, so we picked up on his hobby and gave the project real character with a helmet-like face,” says Charlie Baker, RWD team leader for the exterior and interior design. “He wanted the vessel to have a physical presence and I think the imposing bow and superstructure deliver that.”

Underneath her warlike guise, Ragnar is a radical makeover of Sanaborg, an Icebreaking Multipurpose Support & Supply Vessel (IMSV) built in the Netherlands in 2012. She never saw active service in high latitudes, however, and was laid up near the Icon yard on Holland’s northern coast when her current owner came scouting for a suitable donor vessel to convert into a hardcore explorer. 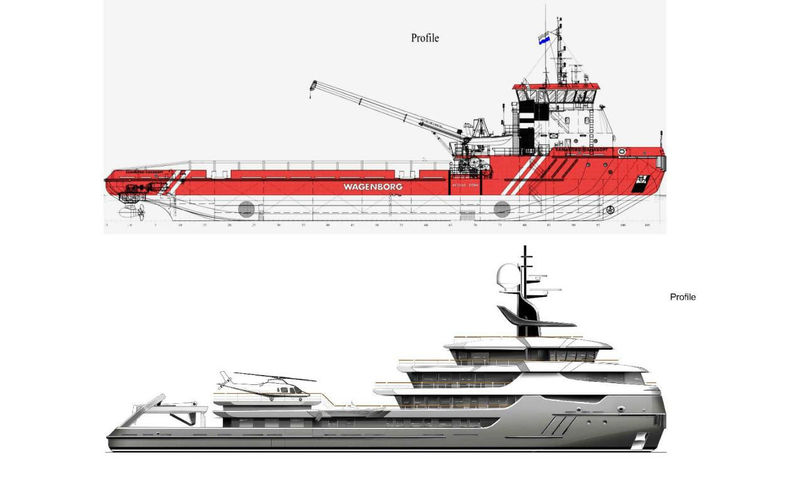 “He was actually looking for something a bit longer, but Sanaborg ticked all the right boxes as a Polar Class icebreaker with diesel-electric pods and virtually brand new machinery,” says Stephan Vitus, head of project development at Icon. “The clincher was when we stood on the bridge looking aft over the huge flush deck and discussed her huge potential.”

Icon carried out a detailed feasibility study lasting several months to ensure the client’s brief could be matched with the technical requirements, as well as the shipyard’s own costing and time frame. At the same time, RWD began work in collaboration with Icon on initial concepts for transforming the exterior profile while keeping as much of the original structure as possible. Sanaborg entered the Icon shed in July 2017. 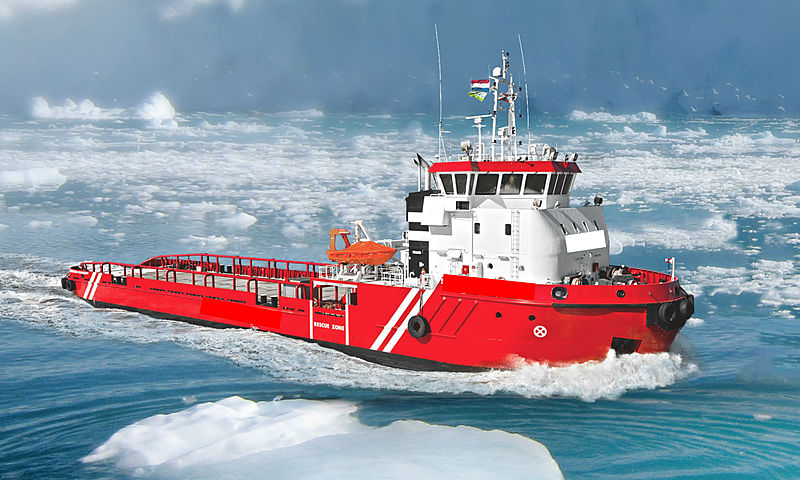 The main goal of the conversion has been to increase the guest accommodation areas and to modify the working deck to carry a fleet of tenders and toys, and an EC145-certified helipad with refuelling bunker and station. Very little has changed below main deck, although several bunker tanks were modified to provide additional room on the under lower deck for a huge gym on one side and a spa with hammam, sauna and massage room on the other, as well as storage and technical spaces.

Between these new guest spaces is a full-height cable tunnel that runs aft from the forward switchboard room and twin CAT 3516 HD diesel engines (2000kW each) to the frequency converters and Ice Class PC5-rated Wärtsilä electric pods (1750 kW each), which are designed to churn ice while moving both ahead and astern (remarkable footage of the original ice tank tests in Helsinki in 2010 show just how much punishment the podded propellers can take). With a maximum speed of 12 knots, at cruising speed the finished vessel will have a global range of around 6,000 nautical miles. 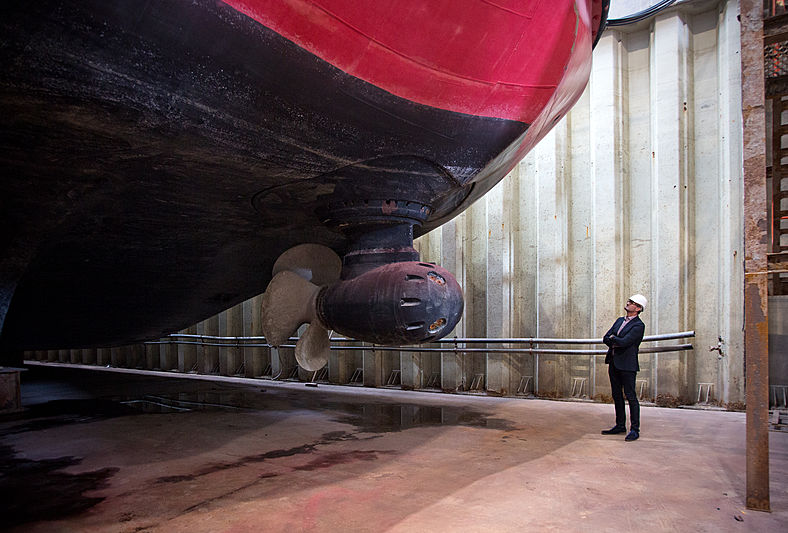 Photo: Justin Ratcliffe / SuperYacht TimesEarly proposals for a bow extension and stern platform were shelved as these would have required resurveying the hull under Ice Class and Polar Code regulations (instead of a stern platform there is a floating beach with a retractable gangway). In fact, when completed project Ragnar will be the first LY3 superyacht rated Ice Class 1A Super able to operate in temperatures as low as -35°C and maintain a speed of four knots in ice over half a metre thick.

There was also talk of a helicopter hangar with a lifting floor, but in the interests of simplicity it was eventually decided to install a fixed certified helideck with a garage underneath to house the various tenders and toys, including a U-Boat Worx mini-sub and a Ripsaw EV2 all-terrain vehicle, which can be deployed by the original 10- and five-ton capacity deck cranes. Adjacent to the garage is a heated and ventilated ski and wet room where guests can remove damp gear after returning from heli-skiing or a tender trip ashore and head straight down to the spa on the deck below.

Avoiding a lifting hangar had a further advantage. During the feasibility study it emerged that due to the unique hull shape and low centre of gravity, the working ship had a GM or metacentric height (a measurement of static stability) of 5.8 metres. Anything over 1.5 metres is associated with shorter roll periods, which are uncomfortable for passengers. Stabilizer fins on an icebreaker were clearly out of the question, so the team opted for a flume or slosh tank in the tender garage. 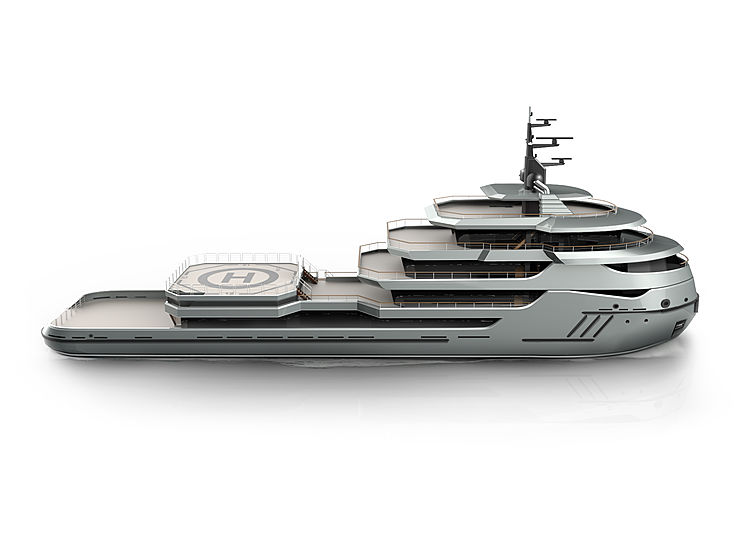 “It’s a passive but very effective damping system that basically consists of a U-shaped tank filled with water that flows from one side to the other as the vessel begins to roll,” explains Vitus. “With careful design and phasing, the motion of the ship is counteracted and significantly reduced. Also because of its particular shape, the tank could be designed to fit in the garage without taking away storage space.”

The need to reutilise existing bulkheads and the lack of a conventional lower deck has led to an unusual interior layout, but the general arrangement combines guest privacy with operational efficiency. The original crew and service facilities on the forward main and upper decks have remained largely unaltered, while the aft sections have been extended to house the guest accommodation and social areas. An exception is the owner’s deck that has a forward observation lounge and an open-air foredeck terrace 7.5 metres above sea level, which will be the place to be when breaking through the ice!

The consequence of removing tankage and extending the accommodation zones is that Ragnar is a high-volume vessel of 2,450GT – almost 900 gross tons more than the original vessel. Charter was a key consideration for the owner and is reflected in the flexible accommodation arrangement. Commercially rated for 12 guests, the six cabins on the main deck and two aft-facing master suites on the owner’s deck offer multiple options for single, double or family occupancy. 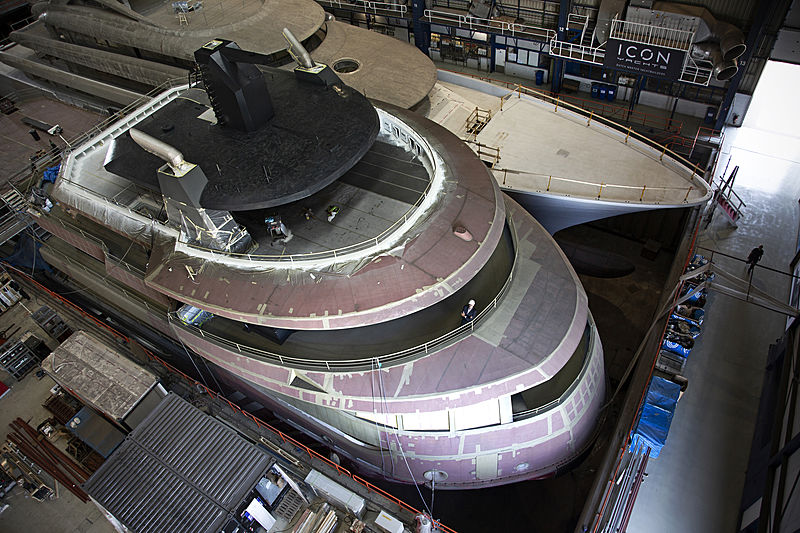 True to her vocation as a rugged, go-anywhere icebreaker, the vessel will have a commercial paint finish using an extra tough abrasion-resistant coating, and minimal fairing on her upper decks to disguise the junctions between old and new steelwork.

“From our point of view, the most challenging part of the project – and also the most rewarding – was taking the owner’s vision and transitioning from what Ragnar was to what she is now,” says Vitus. “If you look at the before and after photos and profile renders, the difference is quite difficult to comprehend.”

Following on from 77-metre Legend, a former Russian icebreaking tug, project Ragnar reinforces Icon’s growing reputation as likely the leading conversion specialist of working vessels up to 3,000GT and the yard is evaluating several other client-led conversion proposals.

“Three legs are a lot more stable than two and conversions are just one of the legs the company stands on, in addition to refits and new builds. ” says Jen Wartena, CEO of Icon Yachts. “Complex conversions require experience and know-how, but also a different mentality: you have to be flexible, creative and solution-minded. I think Ragnar is further proof that we have what it takes.”