The 51-metre Feadship motoryacht Double Haven has been enjoyed as a private yacht by the same owners for more than three decades. She was the first Feadship designed with a comfortable range for Pacific crossings, and her owners took full advantage. Double Haven has made numerous circumnavigations, explored new destinations and travelled to many remote locations.

Following the news that Double Haven has joined the market for the first time, SuperYacht Times’ Alexander Griffiths caught up with Nick Spence, her first Captain and project manager, to hear more about how this unique and trend-setting vessel came to be. 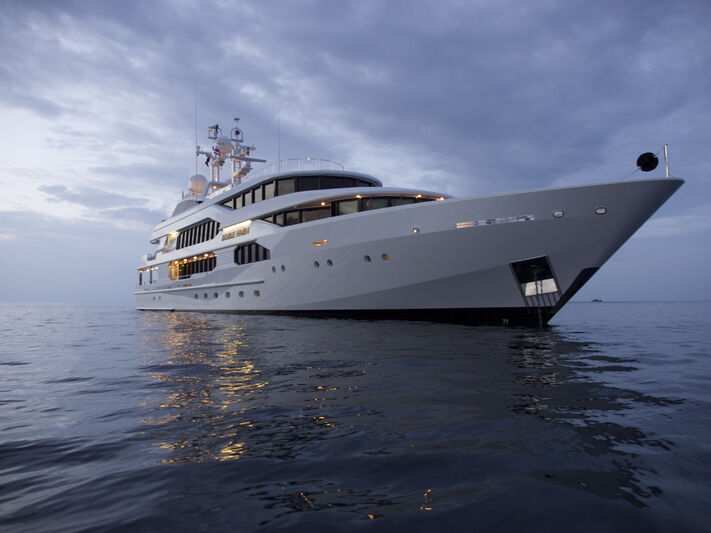 What were the key elements in the design brief for Double Haven?

My clients had owned smaller cruising yachts, but their dream was to have a fully customised superyacht that was designed for cruising the Pacific Ocean and fitted out for diving excursions. They wanted a yacht that was a luxurious residence, while being able to reach the more remote destinations of the world, in comfort and safety for both guests and crew.

Key elements were that she had to achieve the lowest sound and vibration levels possible. She also had to carry a large exploration and dive tender that could be launched and recovered in lively conditions. It was then also important that she could carry enough fuel and stores to sustain herself and those onboard for months at a time. 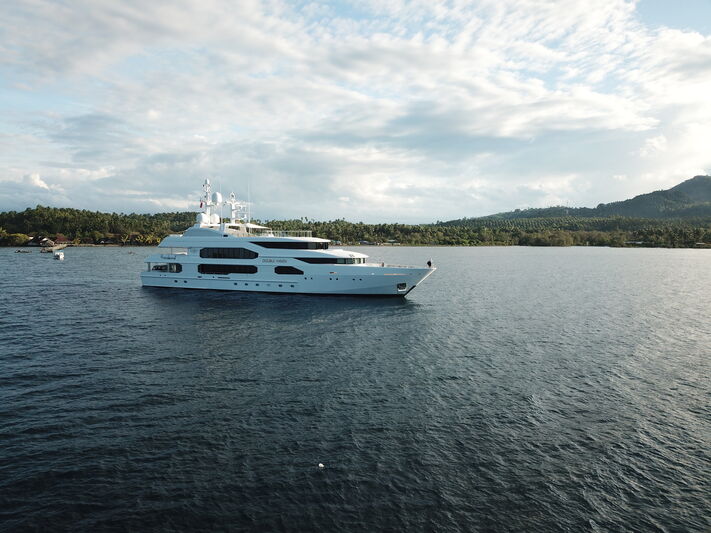 The design had to provide a private residential deck, without compromising the normal traffic flow for other passengers and crew. With an emphasis on form following function and multifunctionality, this yacht was to be ergonomically designed from the inside out. For example, one of our requirements was that from the main deck up you should always see the horizon, whether sitting or standing!

A great deal of time was spent in the pre-bid design development stage for Double Haven; can you share how these initial conversations went?

Once we laid out our conceptual ideas, highlighting what we thought was essential and what would be nice to have, we then spent over 2 years scouring the used market while simultaneously interviewing the top builders in Europe, studying the evolution of their projects and their management.

In the used market, we had a chance to see what worked and what did not! Sadly, we observed many design deficiencies in the used market and in new builds, the causes stemming mostly from rushed bid packages developed only to conceptual levels before going to contract.

We heard horror stories of massive, expensive change requests and realised we had to do our homework to provide the builder with proven engineering and material studies. To ensure that both builder and clients could make informed decisions, the clients gave me the greatest gift of all…. time and a substantial research budget to develop the ultimate design. 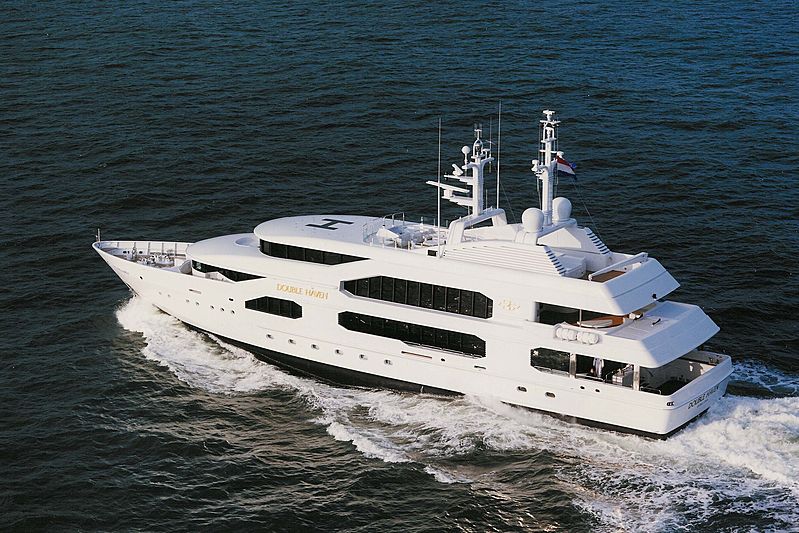 We could not find anything in the used market that even came close to the brief, so we commissioned a feasibility team of the top superyacht subcontractors in the areas of air conditioning, mechanical, electrical, structural and noise/vibration to provide us with the best design criteria.

We were able to fully explore the options without the budget restrictions of a builder already working to a contract price. Richard Hein orchestrated this detailed feasibility and engineering study with an overarching mandate for a highly ergonomic vessel. He was assisted by Glade Johnson, who defined the materials and ergonomics of the interior and red flagged any departures from the interior brief.

The feasibility team did an excellent job of providing well engineered solutions to enable us to prepare a fully developed design. So with that stage completed, we felt confident going ahead with a large and detailed bid package of specifications, drawings and a materials list that would compare apples with apples and give the bidding builders greater confidence in pricing and execution.

Glade Johnson of Seattle was enlisted for the interior design of Double Haven – what drove this decision and what headed the design brief?

The clients wanted a modern superyacht that was durable, elegant, comfortable, and easy to maintain. We knew that choosing the right interior designer was critical so as not to waste the clients’ time. We had shortlisted down to four top firms who, once briefed by the family, did compensated proposals for the owner’s deck and main lounge. Funnily enough, at that time Donald Trump was doing the same for the Trump Princess, but as a competition and without payment except to the winner. 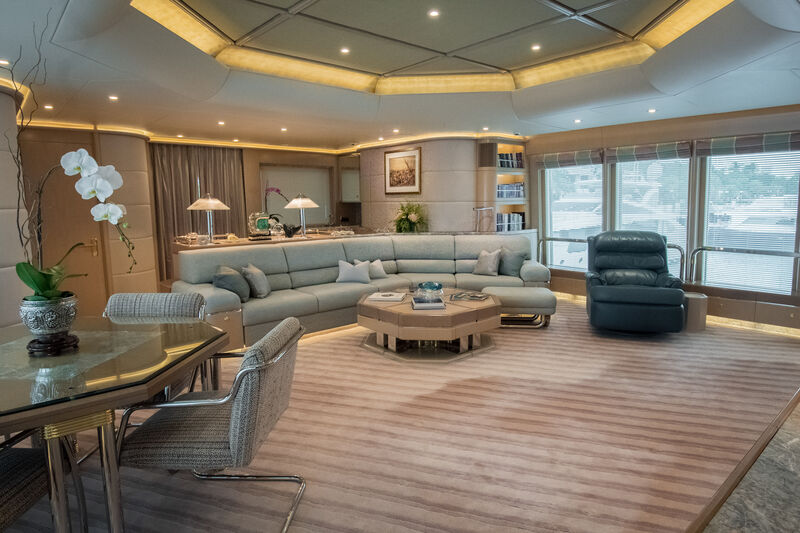 Glade and his team were absolutely brilliant, took copious notes and hit a home run in understanding our needs and preferences. He focused on how to make our vision a practical reality and not on his reputation or ego.

What led to the ultimate decision to choose Feadship to construct the project?

It was a process of elimination. We started with a short list of 6 yards. Feadship was not the cheapest but represented the least risk and we liked the DeVries Family. They were persistent. They were fair. We checked out their customers. There were few complaints. And many previous owners had second and third vessels built by Feadship. That, in itself, was quite an endorsement!

So, after four years of extensive research and development, we presented our detailed bid package to Feadship in 1991, signed the contract in July that year and saw her delivered in December 1993, for a maiden voyage to Antigua.

How was the build process at DeVries Shipyard?

To be honest, I felt that I had died and gone to Shipyard Heaven! We had given them detailed engineering and interior design data that was called “contract guidance drawings” to enable these amazing builders and architects to have a complete vision of what the end product was to be from day one.

For example, we had negotiated very stiff conditions if we did not reach quite challenging noise targets, so workers were fanatical about installing all sound and vibration equipment perfectly. At sea trials, we averaged about 4Db below contract noise targets with a promise to DeVries never to disclose those excellent results. 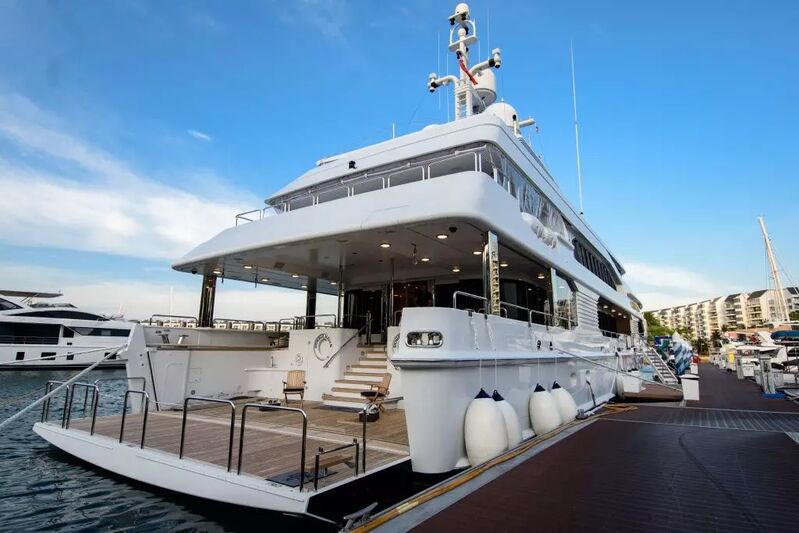 It turned out the build stage was quite anticlimactic, so I was able to focus on the nuances of the second and third level improvements, instead of dealing with basic design deficiencies that often lead to major change requests and stress!

You must have some great stories from your times onboard as captain. Can you share some of your most memorable moments with us?

As the owners have a real wanderlust, to say that Double Haven travelled the world in her 30 years is not an exaggeration. Each destination was unique because Double Haven needed no base and rarely visited the same port twice. Japan was a phenomenal experience as we tracked the cherry blossoms from the South to the North of the country. From those remote islands and coastlines, we could enjoy the historical wonders of the Japanese seaboard and the energy of its thriving cities. 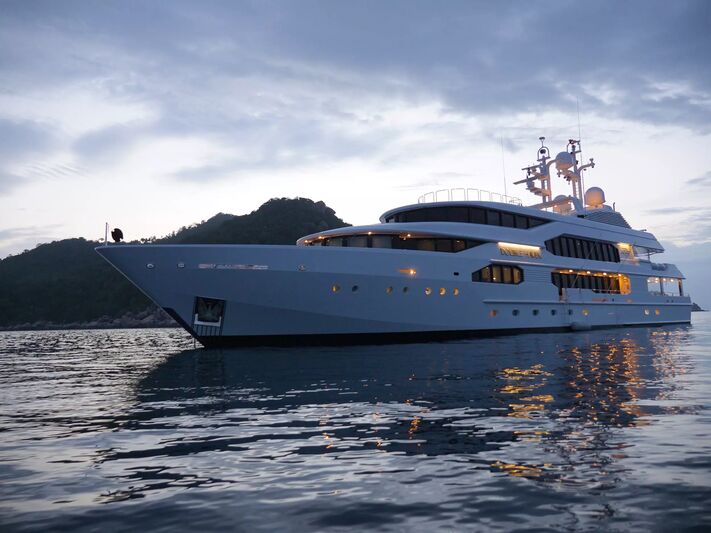 In Europe we enjoyed the rich history and culture of the Continent, in the Americas we partied in Cabo San Lucas, circumnavigated Newfoundland, and fished for Atlantic bluefin tuna off Prince Edward Island. Diving expeditions in the Red Sea, Raja Ampat, Papua New Guinea, Fiji and Micronesia were activities along with sportfishing, that I really enjoyed sharing with the owners.

If I am going to rank my favourite destination, it would still be fishing in Alaska. It was a delight to be her captain for the first 8 years and to prove all our design ideas within the reality of wind and water.

Have you considered or made designs for larger yachts in the past 30 years?

Once you have built a successful yacht, if not physically, you certainly mentally are constantly building and rebuilding your next dream yacht. We actually went through a design study in 1999-2000 for a larger 79-metre vessel that could store a helicopter for remote cruising. However, the advantages of a 51-metre yacht that can dock in smaller marinas and our satisfaction with how well the crew and details of the existing Double Haven worked, could not justify going bigger. A decision we have never regretted! 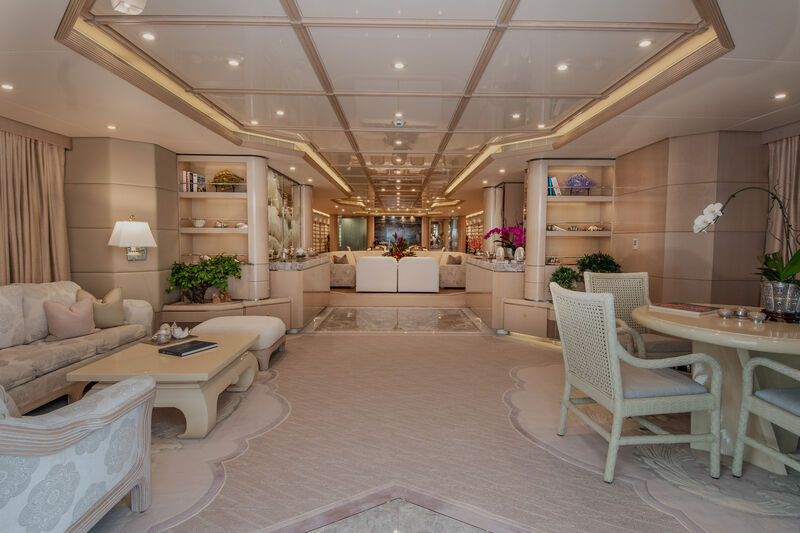 Has she undertaken any significant changes since her launch in 1993?

It was important to us to keep Double Haven up with the times; as technology changed, we continually improved her electronic systems to keep her state-of-the-art, in particular with digital technologies and home automation systems. Mechanically, her engines have proven to be outstanding and continue to serve her well. We change her generators on an as-needs basis while maintaining the highest regulatory classifications.

How do you crew a yacht like Double Haven?

When we are hosting guests, we have 14 dedicated crew. The owners have been able to retain many of our senior crew for more than decades at a time, including our Captains, Chief Engineer and Head Chef. The last captain was with the yacht for 20 years, and the new captain has been with the yacht since 2007, as has the Chief Engineer.

The crew have a long history with the boat, so there is a strong team commitment to the yacht’s maintenance and the well-being of guests, that will be of great benefit and comfort to a new owner.

What drove the decision to sell her after all these years?

The needs of the clients have changed. The older generation has become less agile and the younger family members have other priorities. 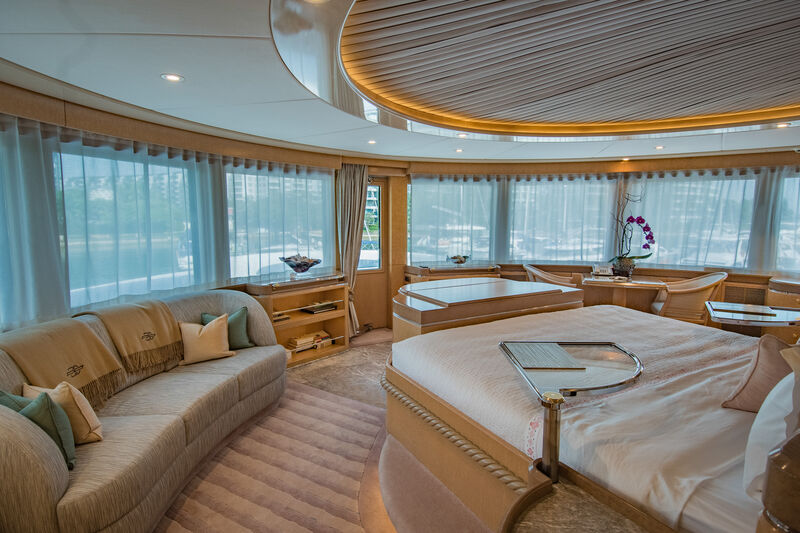 Double Haven would suit an owner who wants a vessel designed with privacy and comfort in mind. She is designed for short and long excursions, entertaining and exploring locations that are harder to reach. She is designed for adventure, but without sacrificing creature comforts, and has proven herself to be deserving of all the design awards and accolades she won when first launched.